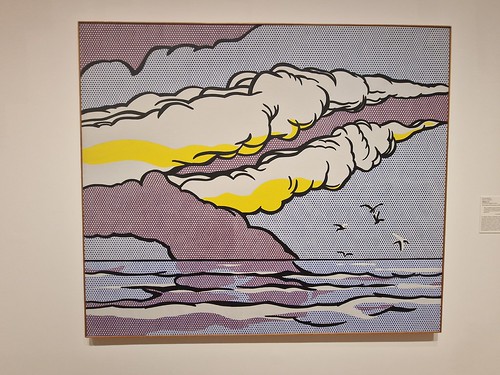 I’ll try not to get too distracted and write hundreds of posts about artworks at the Virginia Museum of Fine Arts, which means that I might have to limit myself somewhat given the number of photos that I took. Roy Lichtenstein is one of the defining American artists in my limited knowledge of this sort of thing, although he himself has said that he didn’t like his work being defined as American, he thought that it was more industrial.

This artwork was painted in 1964 and as the gallery says, it all questions where the lines are drawn between advertising and art. I liked the heritage of this as well, acquired by Sydney and Frances Lewis in 1980 as part of their collection before they donated it to the gallery in 1985. The couple built up an enormous set of artworks as they exchanged items from their mail order catalogue to up and coming artists, a rather clever tactic.

I won’t offer any more analysis than that as it would just sound trite, but this felt like being in an American gallery looking at a proper piece of American art. As for the value of this, I have no idea and I can’t imagine that it would ever be sold, but in 2017, ‘Masterpiece’ by the artist sold for $165 million.