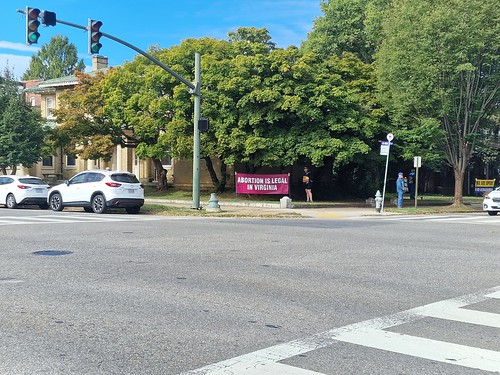 I’ve never seen anything like this before, which were some protesters standing outside of a women’s health centre in Richmond, next to the Virginia Museum of Fine Arts. The banner is the centre’s as abortion is still legal in Virginia, but the men standing nearby with the “Baby Lives Matter” had a megaphone and were saying what they thought about the abortion advice that was being offered inside. There was a lot of “you can adopt your baby rather than murder it” which was it’s fair to say quite emotionally charged language for anyone sitting inside.

Anyway, I’ve heard of this sort of protest but it’s the first time that I’ve seen anything like it. The midterms are on 8 November here and the abortion issue is a huge one in the United States, perhaps slightly favouring the Democrats for these elections more than the Republicans.