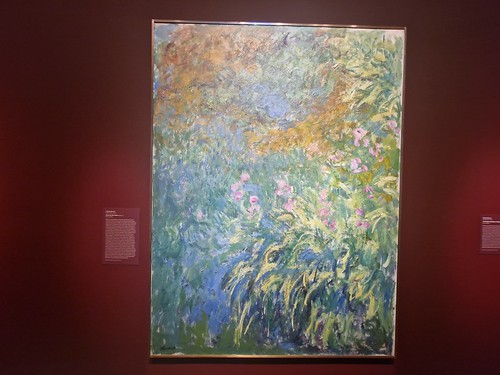 One thing that interests me about artworks in galleries, especially those which have no relation to the artist or where they painted it, is just how it got there. This artwork in the Virginia Museum of Fine Arts is by Claude Monet and is from sometime between 1914 and 1917, one of many that he painted at his home and gardens at Giverny in France, which is now open to the public as a museum and gallery.

Monet’s paintings are scattered around the world and at a quick count I noticed they are in over 150 different galleries, including major institutions and some are in odd little places (which I won’t name as I don’t want to be blacklisted by the people who reside in what I might have called an odd place). This painting is here in Richmond because of Paul Mellon who had inherited much of his money, and then gave it away as one of the country’s leading philanthropists, being a wealthy man and donating tens of artworks to the gallery. And he lived in the area because it’s where his wife, Rachel (or Bunny), was brought up in Virginia and never quite entirely moved away.

This painting has been displayed at galleries all over the world, including Padua (Italy), Nashville, Pittsburgh, Cleveland, New Orleans, St.Louis (United States), Copenhagen (Denmark), Basel (Switzerland) and Madrid (Spain). I was rather more taken with just how many people in so many cities have seen this artwork than the painting itself, not least because there’s nothing much I can say about Monet’s works, other than how clumpy the paint is and I accept that I’m not going to be employed as an art critic with that kind of commentary.

But there’s something fascinating to me of wondering about a painting’s journey and I’m pleased that the gallery has made so much information available about their artworks, and that’s the main point behind these witterings.