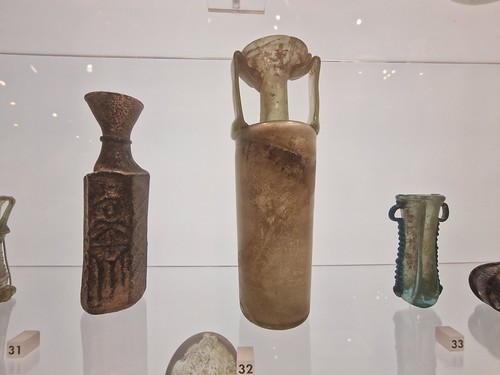 The latest post in my “stuff I like in the Virginia Museum of Fine Arts” (and don’t worry anyone, I’ve nearly finished) is this piece of Roman glassware dating to the third or fourth century. It (the one in the middle of the photo, above the number 32) was made in Rhineland, which was one of the first centres of Roman glass making in the empire outside of what is now Italy, with the limitations being the raw materials that were needed by the industry.

It’s a bottle, or apparently it’s technically called a stamnium, but I think the former is a better word here and it’s one that I can spell. I don’t know what was in it, probably olive oil or something (and there’s a glass Roman bottle in Naples which still has the olive oil in it), but I like to think that it was beer. The Germanic people did brew beer in this period, although Tacitus complained about the quality of it, but we’ve all been there with our commentary on that.

As an aside, the bottle on the left above the number 31, is Byzantine and was made between the fifth and seventh centuries. There’s a little more knowledge about this one as it has Christian motifs, meaning that it could have been used by a pilgrim to carry either water or oil. I like the idea of someone taking part in a pilgrimage carrying that as I went on my own little pilgrimage to a brewery today in Chicago (this blog is being written a little retrospectively at the moment) and rejected the free glass I was offered and instead was given several branded plastic glasses which have rather less chance of breaking. But, I digress.