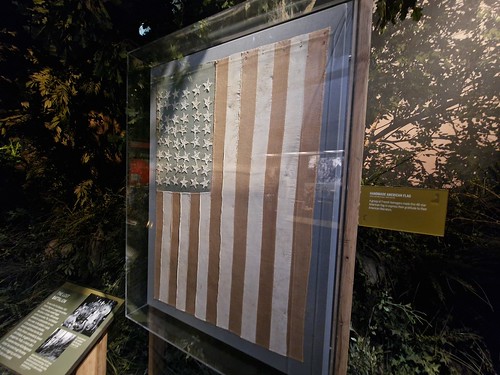 Unfortunately, this is another exhibit at the National WWII Museum in New Orleans which has lost something of its provenance to visitors as there’s nothing more about it on the museum’s web-site. Indeed, the only other mention I can find of it anywhere is on the blog of another visitor who simply makes reference to it. The description at the museum is:

“A group of French teenagers made this 48-star American flag to express their gratitude to their American liberators”.

This is really quite lovely, it would have been a difficult and time-consuming flag to make and I’m sure that it meant a lot to those American soldiers who were there at the liberation of whatever French village, town or city in which the teenagers lived. The museum must have at some stage accepted this item and been told its back story to some degree, but it’s not something that they’re passing on. I find this all quite strange, I’m sure that there must be an internal database of their collections and perhaps one day they might make that available on-line to everyone.

It would have added something really quite positive to the story of this flag if there was some hint of where in France it might have come from, some greater recognition for those involved in its creation. But it’s still a beautiful gift and I’m sure it was very much appreciated, something which is evident by the fact that it has survived.