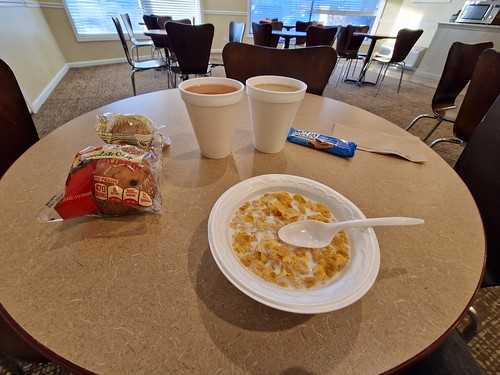 One final breakfast at the Rodeway Inn and my plan for the day was to get to Chicago city centre before going back out to the airport for a flight to sunny Las Vegas. 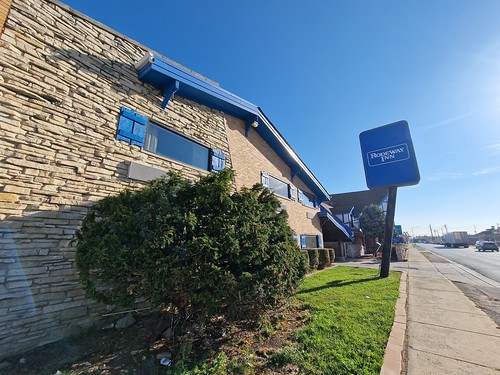 Waving the hotel goodbye. I’d better add that I didn’t physically wave as the reception staff might have thought that I was a bit odd. 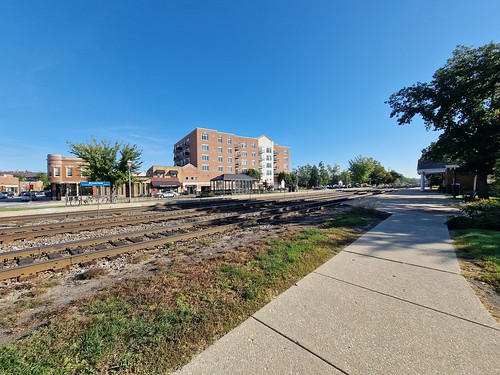 Back at Brookfield railway station and for reasons I’ve mentioned several times already, there was no way for me to buy a ticket in advance. 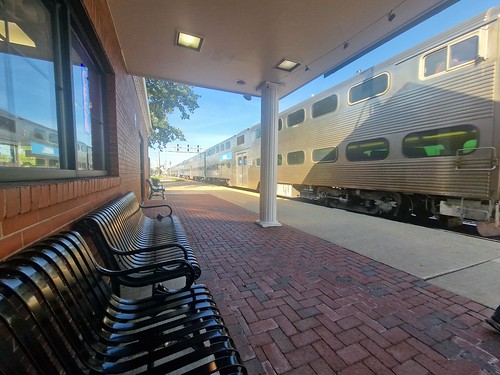 The train came sweeping in on time with its horns blaring. It’s very America, it’s just not the same getting on the train to Great Yarmouth. Partly because the trains in the United States actually operate, but I’d better not digress. It’s not clearly visible in the photo, but there’s a bin behind that rear bench and there was a squirrel in there merrily playing and cutting up the bag. The station staff didn’t seem entirely thrilled. 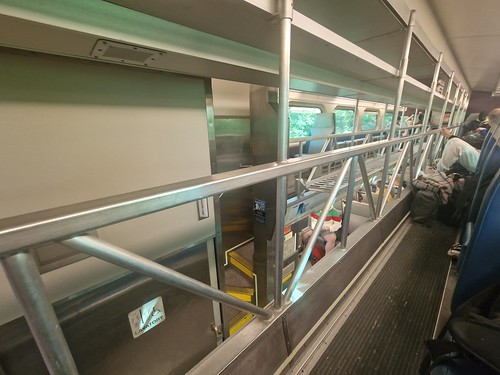 After safely boarding, I went for the top deck again. 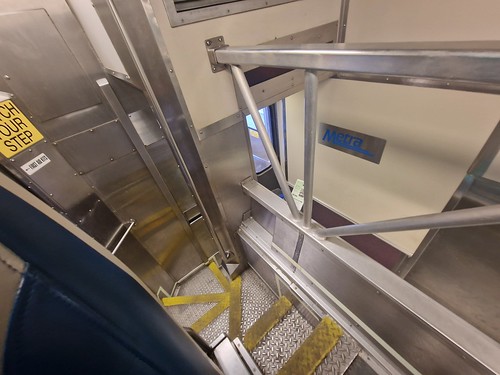 I paid for my fare in cash, which I think was just over $5, and the conductor puts the ticket in the gap to show that I’ve made payment. It’s still a little strange trying to conduct financial affairs by peering over the barrier, but it adds to the experience I suppose. 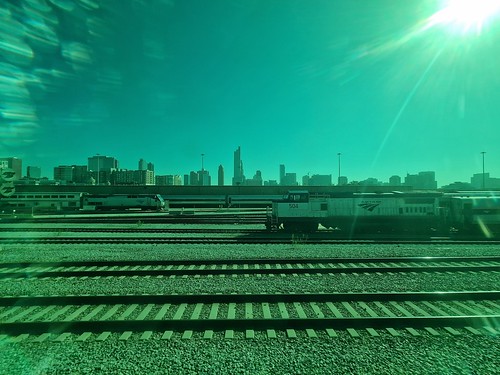 The Chicago skyline, with the anti-sun coating on the window clearly visible. 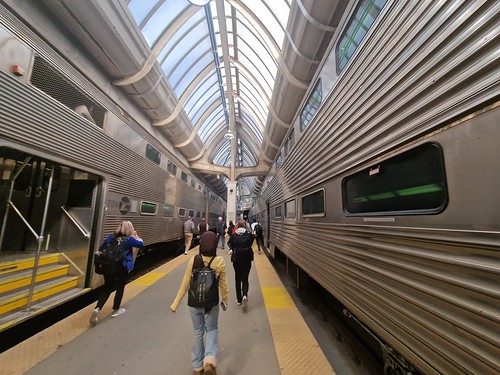 It was about a 25 minute rail journey and the train arrived on time. The service was relatively busy, but there were always seats available upstairs and downstairs. 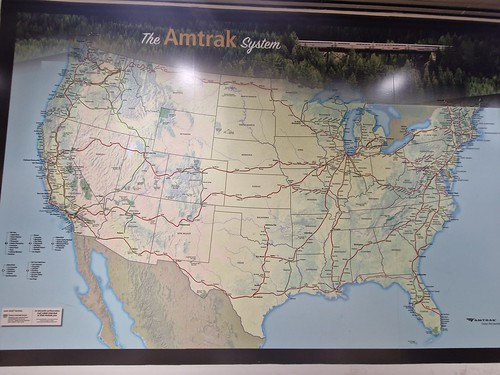 The large scale map on the wall of where Amtrak service in the United States and there are plenty of gaps, including many states with no rail service at all. It’s not ideal. 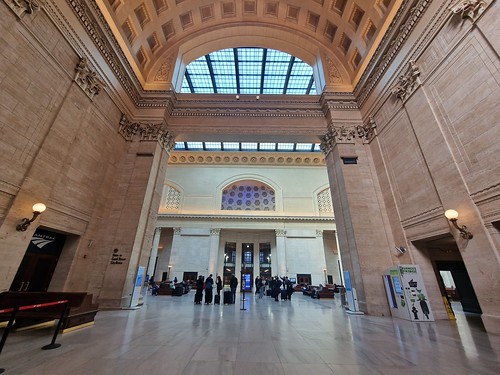 I’ve been to Chicago Union station many times before, but I’m still always slightly in wonder at its grandeur and beauty. 100 years ago this would have been how everyone travelled, before the convenience of domestic air flights and also before mass ownership of cars. The station itself is from 1925, replacing the smaller building which had served rail passengers since 1881. The word “union” is used because it was used by multiple rail companies, hence the number of Union Stations around the country. 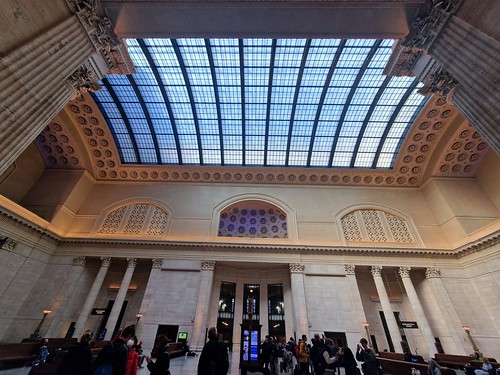 Well that photo is slightly on the wonk, despite my best efforts at the time. 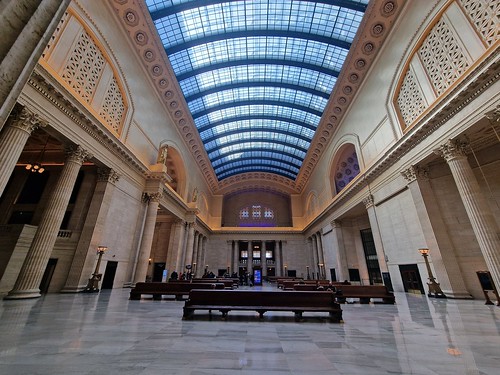 A bit better. All that space, it’s an architectural masterpiece and there’s plenty of seating. It’s fair to say there’s some wasted space here as well, but at least it doesn’t feel cramped. 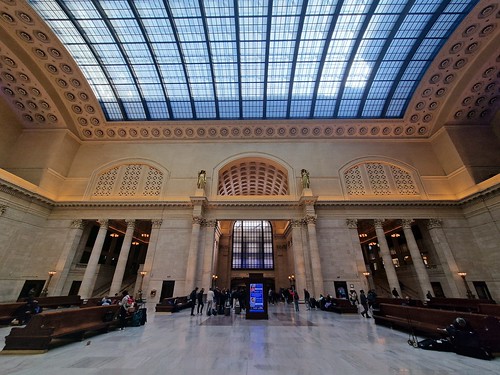 It’s definitely the best way to arrive into Chicago. There are some other handy practical features to the station as well, such as the free toilets although I wouldn’t say that they’re the highlight of the proceedings there. Anyway, that meant I had a few hours to explore the city centre once again before getting back on the subway to go to the airport.