I haven’t much thought about this building before when walking about Warsaw, but it’s the Prudential building which was the tallest structure in Poland when it was completed in 1933 after two years of work. At the time of completion it was the second tallest building in Europe, a huge statement of faith in the future of Warsaw, which needed 2 million bricks, 2,000 tonnes of concrete and 1,500 tonnes of steel to construct. And here it is on 28 August 1944 when the Germans used huge amounts of explosives to destroy it as part of their destruction of Warsaw. Their engineers couldn’t get the building to collapse, although they did huge damage and it started to lean a bit. This must have considerably annoyed them, as it was an iconic structure that remained standing. And, it survived the Second World War and was repaired and hence why it is still standing. It has spent most of its post-war life as a hotel and is currently the Hotel Warszawa, a decadent accommodation option in a building which is a great survivor. 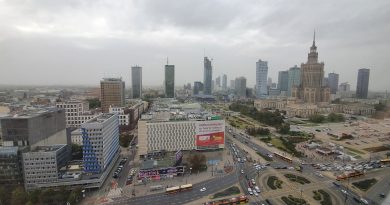