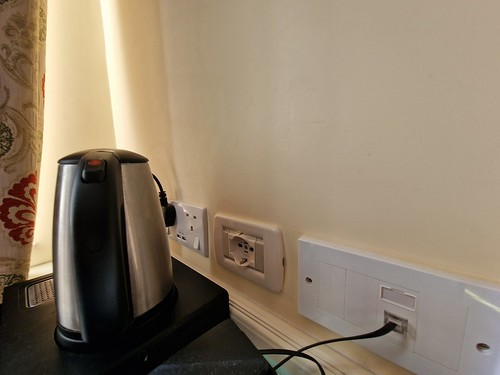 Starting the day at the Linton hotel in Luton, I was moderately perplexed why they installed all the power points the wrong way up. Not that I suppose it matters much in the grand scale of things, but I like having things to be perplexed about. It’s a slightly strange set-up throughout the room, they seem to put the beds up against the wall when they’re not in use. 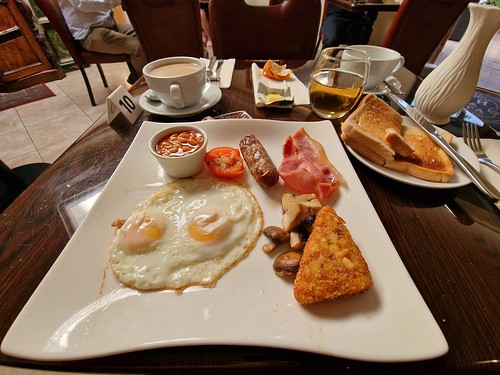 Breakfast was included in the room rate and it was all a bit odd. I got just about the last table, even though I was there at 07:00 when they started serving. There were juices and bread to toast, which took about four minutes in the toaster (not the juices), whilst the rest of the meal was cooked to order. There was no choice, the overwhelmed staff member went from table to table saying “what would you like for breakfast?”. He was polite, but just about everyone replied they hadn’t seen the menu. He replied “there’s a full English breakfast or toast” which a couple of people declined so I assumed they expected something else.

It’s not my favoured choice of breakfast as it’s all a bit stodgy, and it was a little barren on the plate, although the quality was OK, but it was nothing particularly exciting. 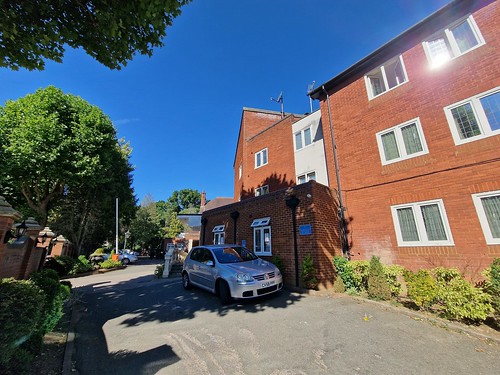 The hotel is keenly priced though, I would stay there again if I was in Luton and it was the cheapest option. 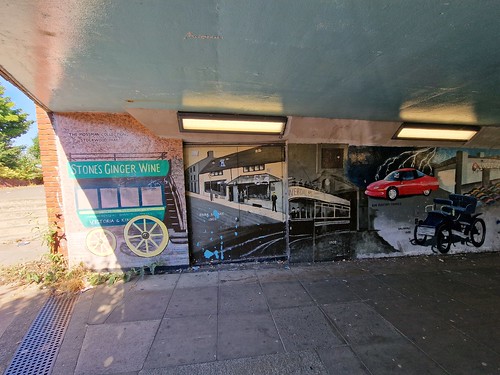 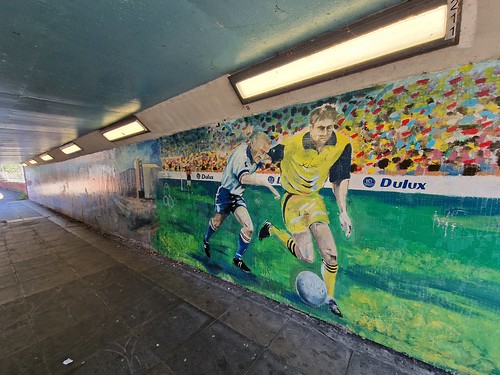 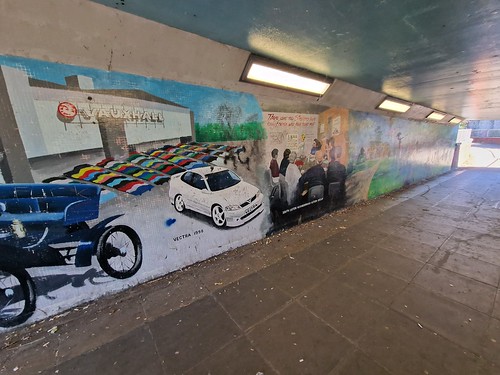 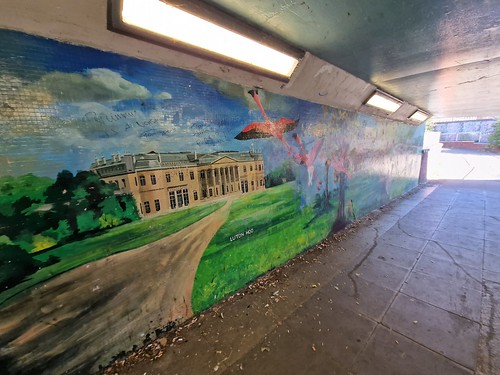 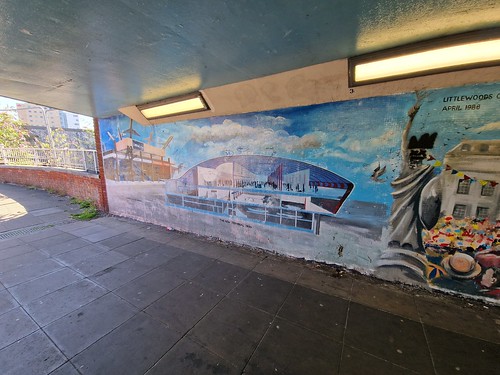 It’s about a twenty minute walk from the hotel into the town centre of Luton and it goes under this really rather well designed underpass. Numerous images representing the history and culture of the town, it was impressively free from vandalism. What is more impressive is that it has been there since November 1998. 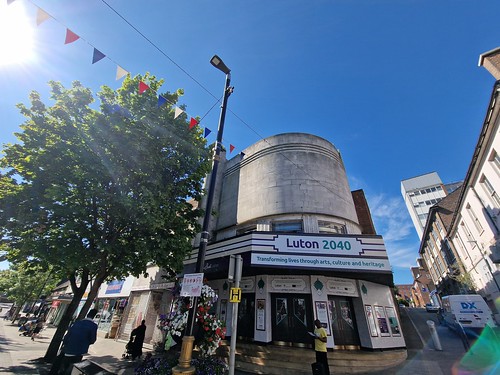 Luton 2040 and the mission statement for the future is apparently:

“In 2040, our vision is for Luton to be a vibrant, fair, and prosperous town where people can live their lives to the fullest. We will all achieve our potential and reduce inequality. A town where no one lives in poverty.” 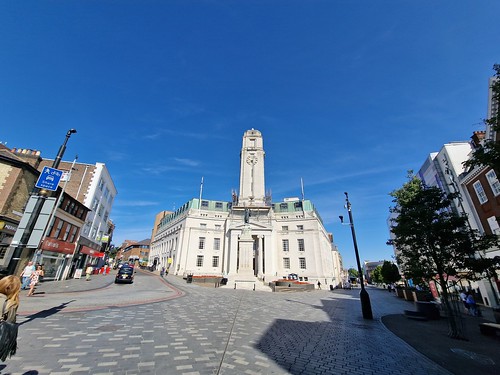 Luton town hall and war memorial. This town hall was completed in 1936, built on the site of the previous building, which had been raided and set on fire during rioting in July 1919. What was annoying for the authorities wasn’t just the huge loss of an asset, but the disruption to the provision of services to locals and also it took place on Peace Day.

There was a week-long court trial and a debate about whether it was technically a riot, but it was decided that it was. 28 men were sent to trial, 9 were found not guilty, 2 were bound over, 16 received prison sentences of between two months and eighteen months and 1 man was sent to prison for three years. The longest sentence, and for one of the most violent of the men involved, was Frederick Plater, a 27 year old labourer who was not only found guilty of destroying property, but also assaulting a fireman. He sounds nice… What is perhaps worse about Plater is that his child had been born the month before. He remained living in Luton until his death in 1943, so he saw the new building constructed. He lived at 69 Chase Street, so his route into the town centre was the same one that I took from the hotel. 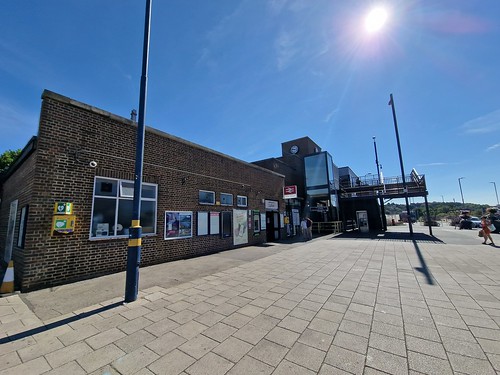 Anyway, I had a train to catch. It’s not the most glamorous of railway stations. The railway station has been on this site since Midland Railway built it in 1868, although it was rebuilt in the 1930s. There was once another railway station (operated by GNR) located almost opposite, Bute Street which remained in usage until the 1960s when it was pulled down. 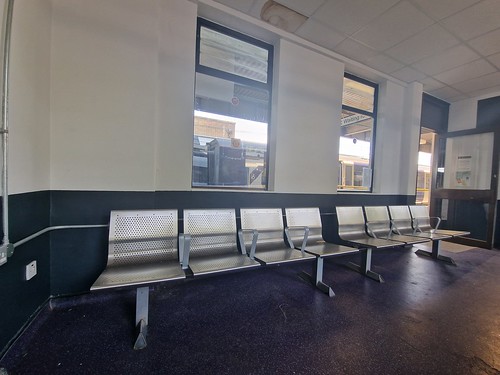 At least the waiting room had power points. 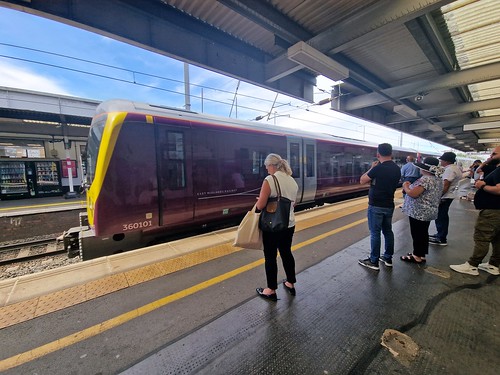 The East Midlands Railway (EMR) service from Luton to London St. Pancras, which only cost £5 as I booked in advance, which I thought was rather excellent value for money. The train also had plenty of space, although the interiors of these trains need ripping out, although EMR do note that “by 2024, we will operate our new fleet – which includes our state of the art Aurora InterCity trains”. 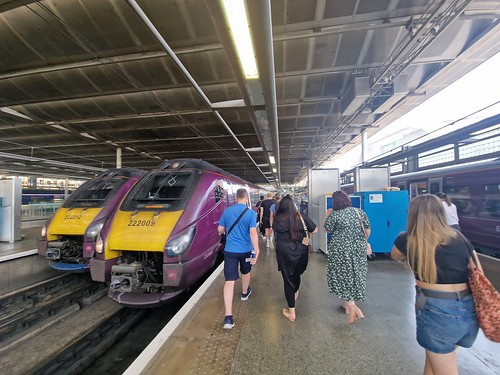 It had been a relatively busy service, the train I arrived on is on the right hand side of the photo. Those two trains on the left are the Meridians which will likely be withdrawn next year and replaced by the Aurora Class 810 trains. I’d add that I didn’t know that, I looked it up. 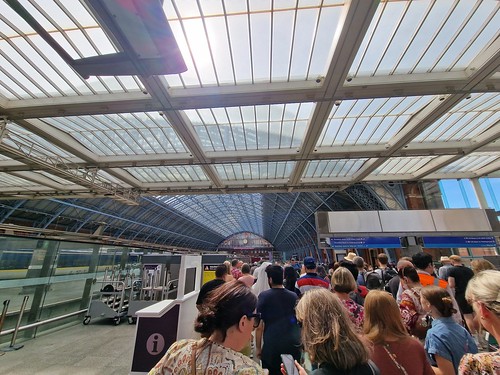 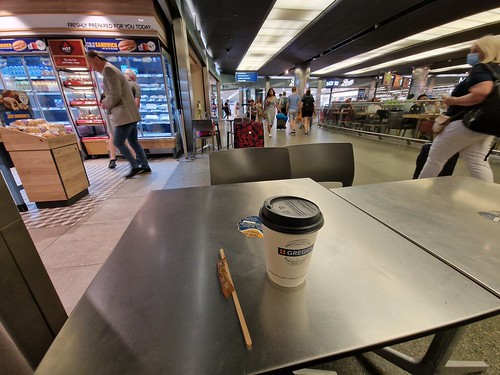 I had a free Greggs coffee with my O2 app, which meant watching the world go by in St. Pancras for ten minutes. 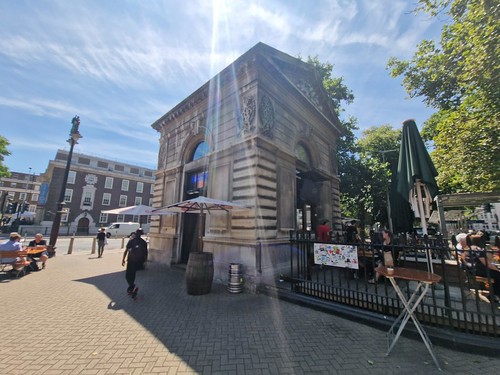 A quick stop at the Euston Tap. 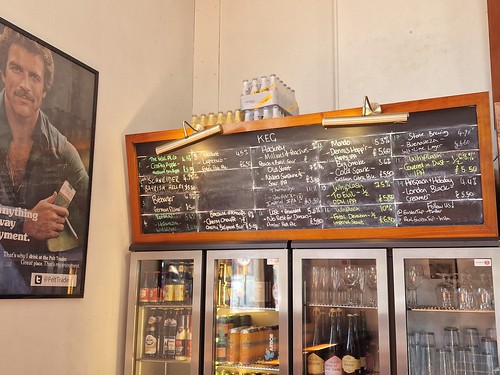 They had some rather decadent options, but they don’t serve in thirds, so I didn’t get the Fatal Deviation from Whiplash. Without wanting to sound like someone who is too easily annoyed, I must admit to thinking slightly less of them for not serving in thirds, it limits people from trying more beers, so I will probably find another favourite pub in the area. The staff are friendly and engaging though, there’s a nice atmosphere at this pub. 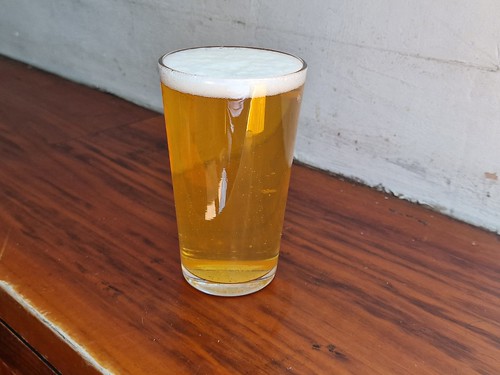 The Dennis Hopp’r from Mondo, a decent enough IPA. 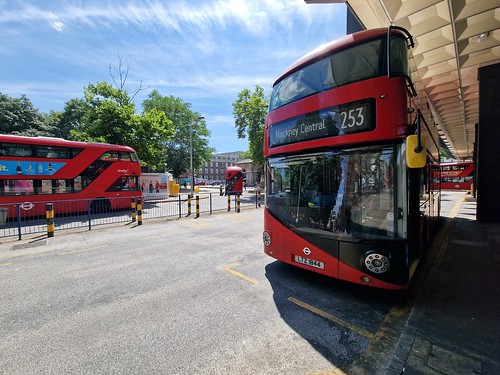 Then off to North London on the delights of the 253 bus. 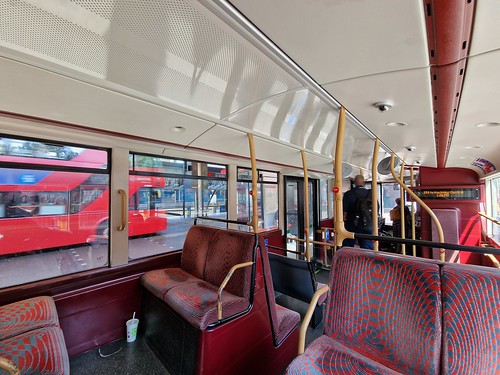 The bus interior, I noted quietly that the driver went through two red lights which didn’t seem ideal. 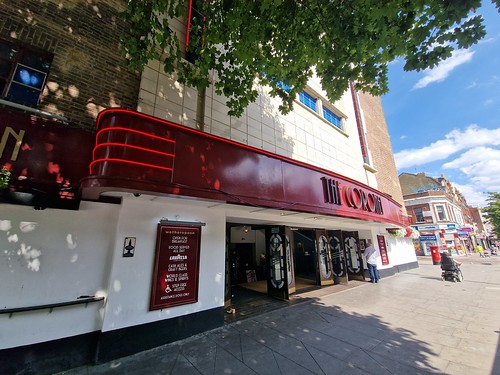 The Coronet pub, operated by JD Wetherspoon, in Holloway. 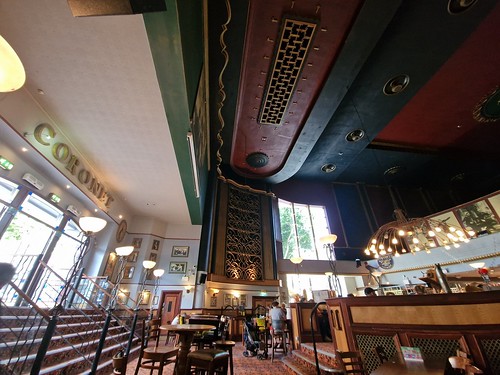 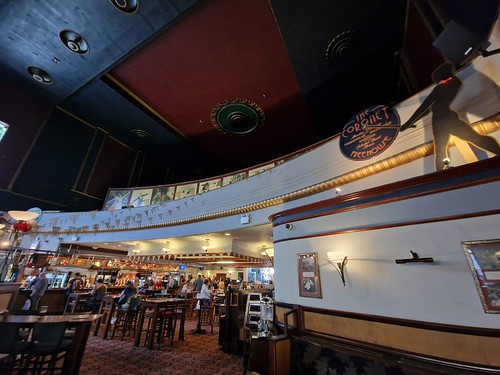 The grand interior of what was the Savoy when it opened in 1940, then later an ABC cinema which remained open until 1983. JD Wetherspoon have done what appears to me to be a excellent job here, very sensitive to the heritage of the building. 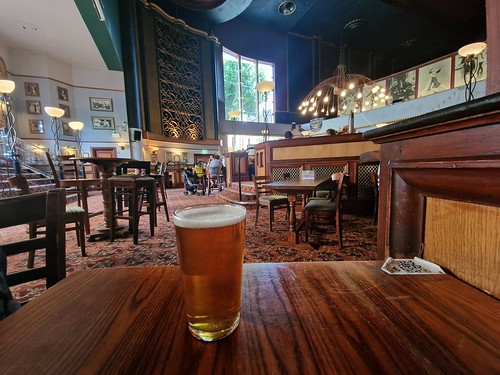 The Orange Zeus from Twickenham Fine Ales, not exceptionally reviewed, but I rather liked the orange marmalade type taste. It was well-kept and at the appropriate temperature, with the usual low JD Wetherspoon prices.

And this is where the post ends, I’ll pick up on the story of the following day when it was time for the big Hike Norfolk trip to Canterbury that I had sort of organised. How exciting! 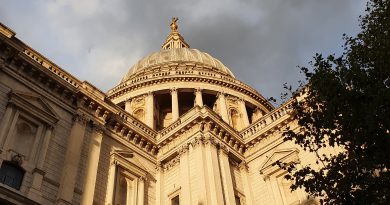