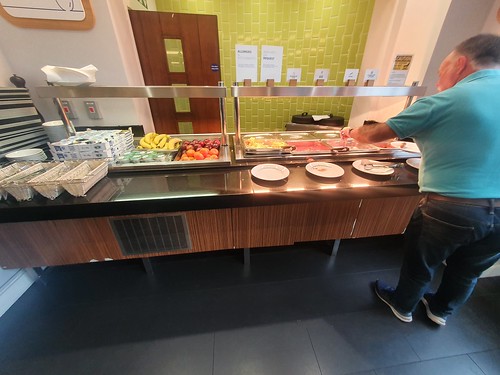 The day started with breakfast at the Heathrow T5 Holiday Inn Express in what is a busy airport hotel and I think I took this photo at the quietest possible moment. This is all high volume turnover food and drink, but it’s all brand standard and what I expected from the chain. I like airport hotels for numerous reasons, and not just because it often means that I’m going away, but because there are people of different nationalities talking either about their excitement for going on a trip or talking about the one that they’ve been on. There were plenty of Americans in this hotel, not perhaps surprising given it’s an IHG property. 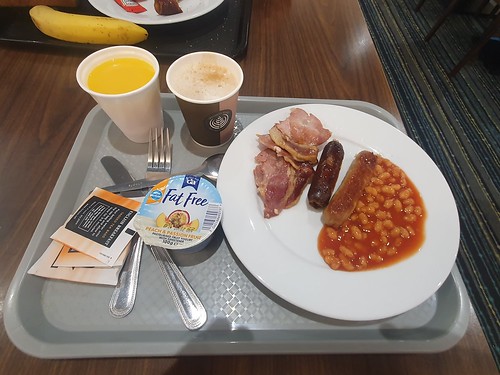 The bacon was odd, one side was slightly burnt and the other side was only just cooked, but it was very moreish and I think I rather overdid them and promptly got a salt overdose. That banana isn’t mine, Ross went for that. I didn’t say anything though. Given that the breakfast was included in the room rate, I thought that it was all quite reasonable, I did enjoy the bacon and sausages. 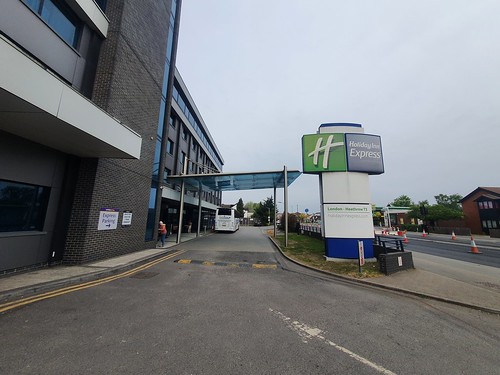 I would have usually taken this photo the previous evening, but it was a bit dark then…. The hotel is unlikely to win any design awards for its exterior, but the staff were helpful and I had no complaints about the stay. 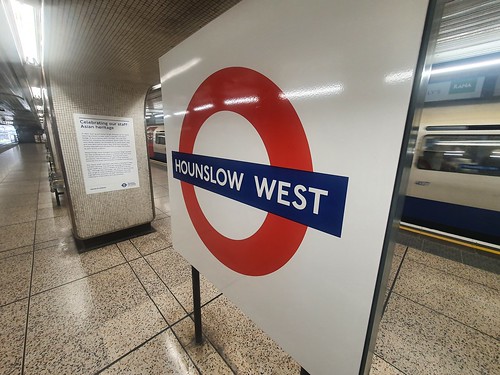 It was a bus to Hounslow West (fortunately there’s a bus stop a short distance away from the hotel), which took longer than I had anticipated, the Bath Road  certainly has a lot of stops. Ross got off at Holborn to change to the Central Line to go back home, whereas I had the Hike Norfolk walking day which meant that I stayed on the Piccadilly Line until King’s Cross. 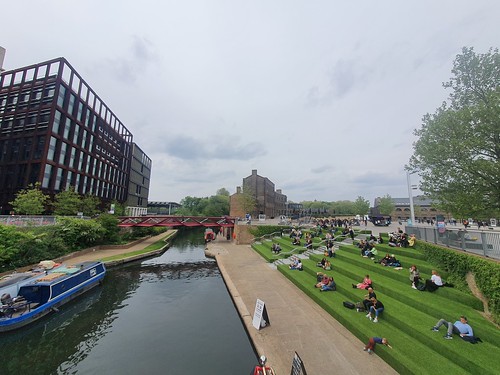 After getting a quick free coffee, I started to walk along the Regent’s Canal from the King’s Cross area to meet the others. I didn’t rush, as the further I walked then the further I had to walk back and I had a very heavy bag after a few weeks away. Indeed, I had quite of little sit downs whilst letting the others walk towards me. 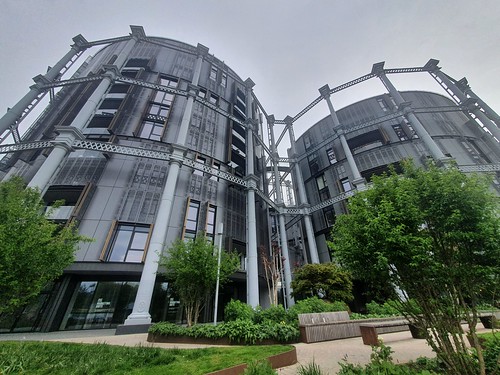 These gas holders at King’s Cross were modernised to be used as housing, this shows real innovation and respect for the local environment and its heritage. The one in Norwich was just pulled down in what I considered to be an appalling decision, but there we go. Mind you, although the properties are properly really lovely to live in, the prices start at £725,000 and there are sizeable annual service charges, so I think I’ll stay living in Norwich. 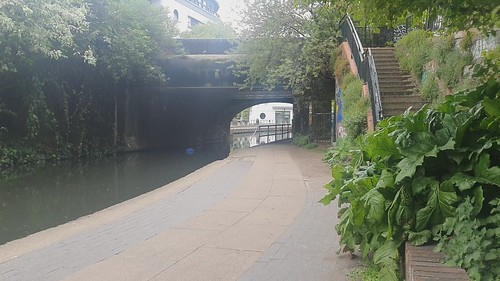 I could hear them coming (this is a video, if it doesn’t auto-play, then click on the image) as it’s fair to say that there are some loud members of the group. As I am the sole of discretion, I won’t mention any names. The walk was led by the formidable Steve along the route of the Regent’s Canal, which is 8.6 miles long and goes from Paddington in the west to the Limehouse Basin in the east. For my loyal followers, I reccied some of this walk with Steve and Bev a few weeks ago. 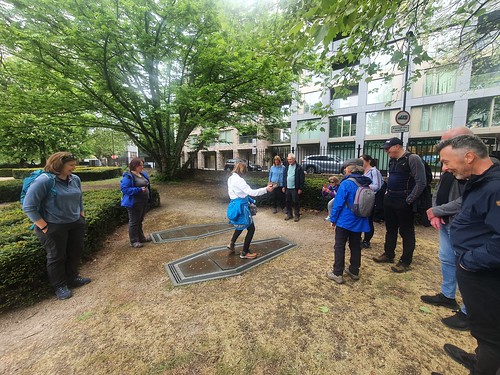 Dancing on graves isn’t usually acceptable behaviour, but it is here in Joseph Grimaldi Park. We diverted here because I knew of its existence, and I’ve written about it before. 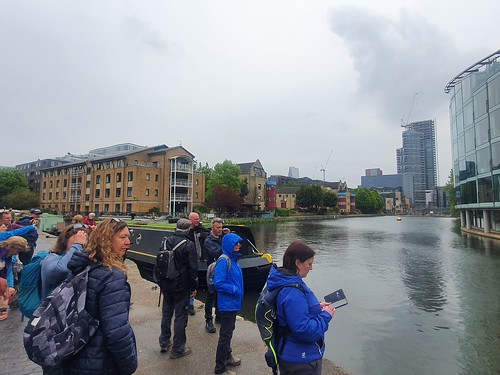 The canal walk in mid-flow. 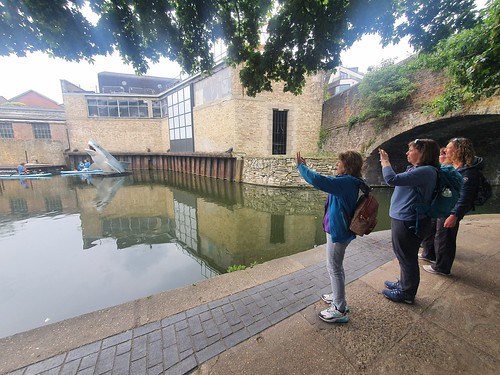 There were lots of opportunities for photos whilst walking. 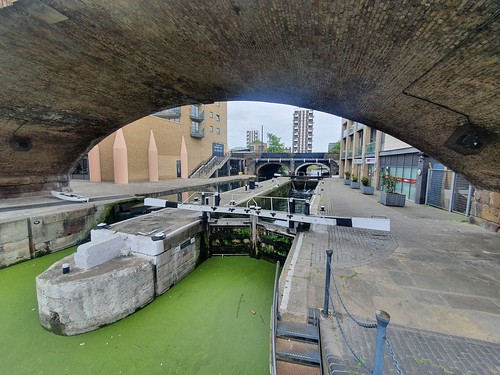 A lock and I do enjoy watching boats navigate through these, always slightly relieved it’s not me that has to be in charge of that process. It looks quite complex and I’m not sure that I’d find a holiday on a boat relaxing if I had to do this more than once. I don’t think that I’m a born mariner though. 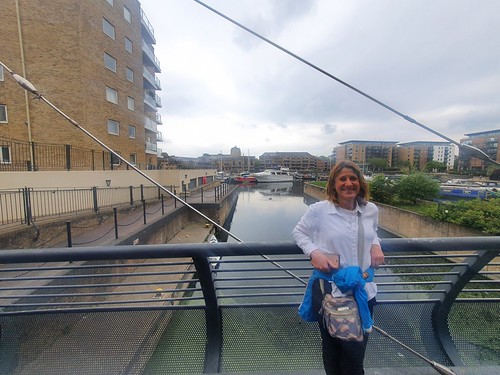 The lovely Sarah posing for photos. She was bravely walking the Rodent Wriggle the following week and was just a little nervous, but I did my best to offer helpful advice (did I mention that I’ve walked the LDWA 100?) and I’m pleased that I’m sure that I was useful as she completed it. 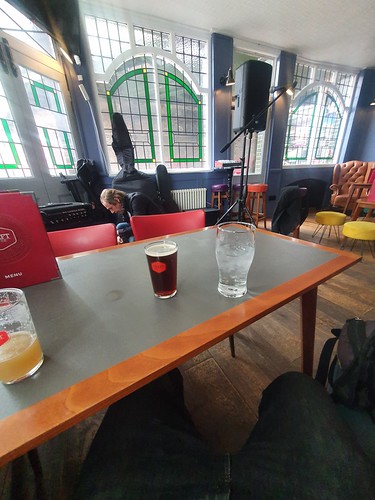 I went to the pub as I had a heavy bag and couldn’t be bothered walking any further (we had finished the Regent’s Canal early so Steve thought of another short walk he could lead), well, and I love pubs. This is the Craft Beer Co outlet at Limehouse, which again, I’ve written about before. The music was setting up and I helped pass over a couple of wires, which I think nearly defines me as a roadie (although perhaps I’ve rather under-estimated what they actually do). 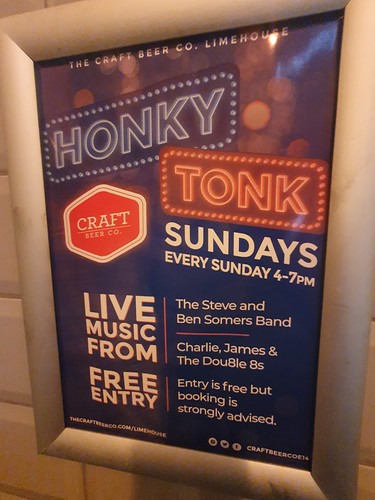 I decided to leave at 16:00 with no disrespect to the musicians, but I’m not big on live music in pubs. 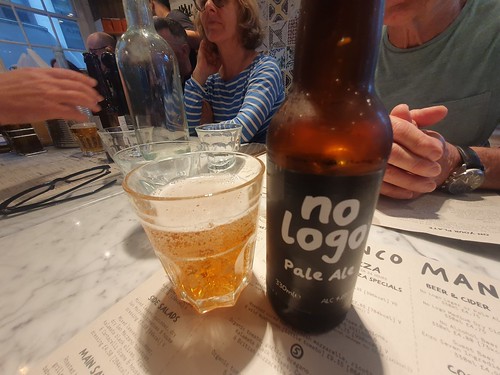 After a quick ride on the DLR and then a 15 minute walk (which I rushed in case the others got food before I got there), I caught up with the rest of the group in central London as they were looking for food options and they had chosen Franco Manca, partly because nowhere else was serving food. I had heard of this chain, which has about 60 outlets in the UK, but never visited and so thought this was an interesting choice. 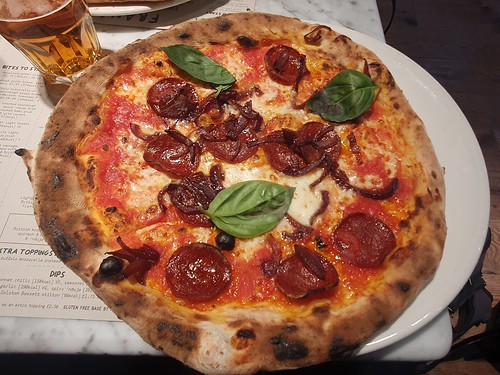 The pizza was reasonably priced and suitably decadent, I was surprised and delighted. Mine was served first, so I had additional reason to like this restaurant. I went for the lightly smoked beechwood spicy salami with organic tomatoes, caramelised red onions and homemade chilli oil. Indeed, I’m making myself hungry two weeks on just thinking about that. I’d come here again, with the pizzas costing under £10 which is very reasonable for central London. 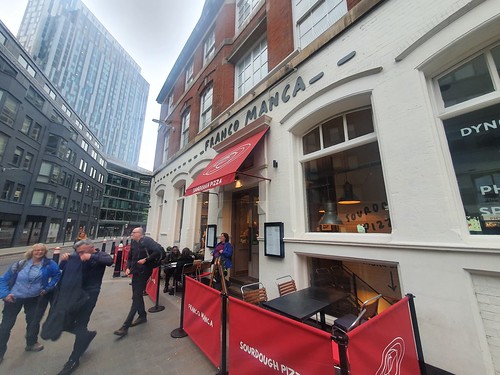 A successful meal I’d say (I didn’t hear any complaints), which meant that we just had a short walk back to London Liverpool Street railway station. They also had numerous charging points, which was handy to reinvigorate my numerous devices. 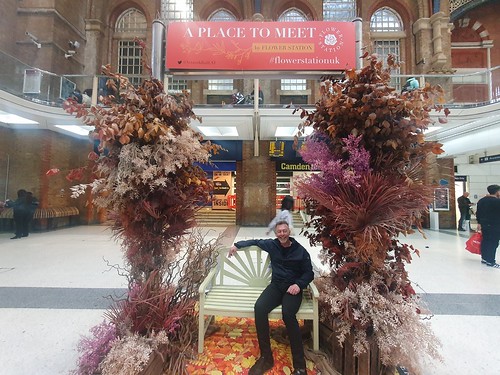 Steve posing at Liverpool Street, where we had a suitable rest whilst waiting for the train. I had been away for some time, including trips to Nuremberg and Barcelona, as well as a hike up a Welsh mountain on a challenge event, so I was ready to return home. 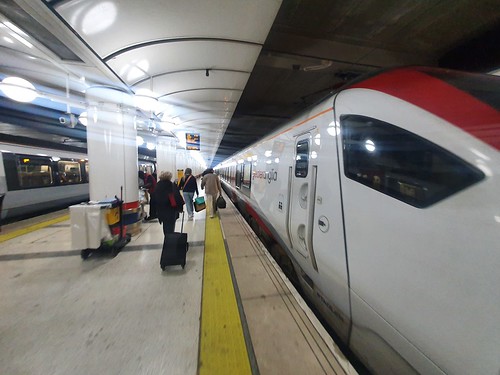 Boarding the train home, which was suitably uneventful other than for Andy accidentally punching someone, but I’m pleased to say that as it was an accident he wasn’t arrested by British Transport Police. I didn’t mind too much arriving back on time, as usually I look forwards to claiming the Delay Repay, but there was no delay on this service. And, as I’ve moaned about before when they put the bloody Stansted Express service on, I’m pleased to report there were tables and we had an appropriate train.

With that, it was good to be home and thanks to Steve for a really rather lovely day in London.