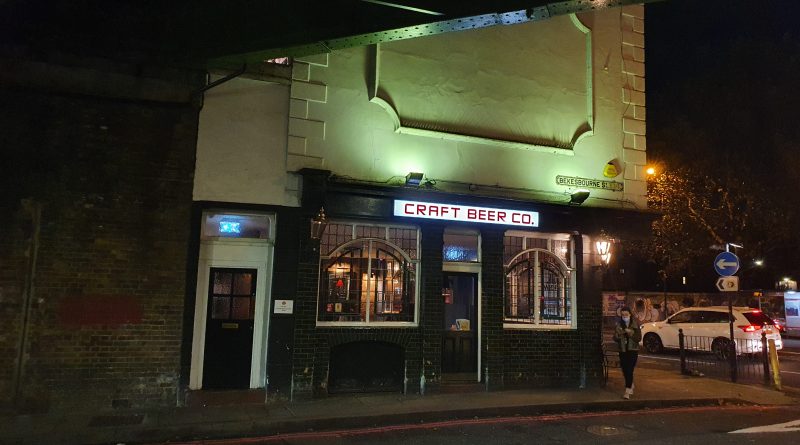 I’ve been to a couple of other pubs in this small chain, notably the Brighton and Clerkenwell ones and I’m going to make an effort to tick all them off my list over the next few weeks. This one is located pretty much under Limehouse DLR and railway station, indeed the rail bridge is visible in the above photo. I arrived shortly after it opened at 17:00, which is a little later than before the current crisis when it opened earlier on in the afternoon. The pub was formerly known as the Railway Tavern and was operated by Charrington’s, a larger brewery who became part of Bass. The beer menu, which is different to what is listed as the latest one on the web-site. On checking, this is because they haven’t updated their web-site since July, which isn’t perhaps ideal. Anyway, there’s a decent list of beer styles here, although a few of these beers aren’t particularly well reviewed, many are from smaller breweries and so it’s good to support them. The Mexican Cake which I had a couple of weeks is on there, but although it’s a quite brilliant beer (one of the best that I’ve had), I felt I’ve tried it enough in 2020 at that price.The Pentuple from Hoppin’ Frog sounds amazing, but it’s nearly £30 per pint and I wasn’t feeling that decadent. I went for a third of the Strip and Drift from Polly’s, a small brewery in Wales, and the staff member apologised that she had over-poured it, although the pub didn’t charge for that. This wasn’t a problem for me. It’s not my normal beer style, but experimentation is the key as I’m sure someone once said, and this was delightful. I’m not used to the flavours in this kind of beer, but there was a sweetness, pineapple (which isn’t in there and no-one else noticed, so I’m likely just wrong on that), citrus and even some biscuit. OK, I think I’m going overboard here again, but there was a decadence and richness to this that was rather lovely.

The staff member was friendly and engaging throughout, although she got a bit behind as she was trying offer table service, which meant that two tables walked out without ordering. I felt that the atmosphere was relaxed though and I felt really welcome, this is definitely one of my favourite pubs in this area. It’s not a large pub and Monday is the day that they don’t serve food, so I imagine that it’s often quite hard to get a table. It was also clear that many of the customers were regulars, but the pub didn’t have a cliquey feel.

So, I liked this pub and I very much like this chain. It might not be the cheapest, but I like the innovative choice of beers that they have. Nice.