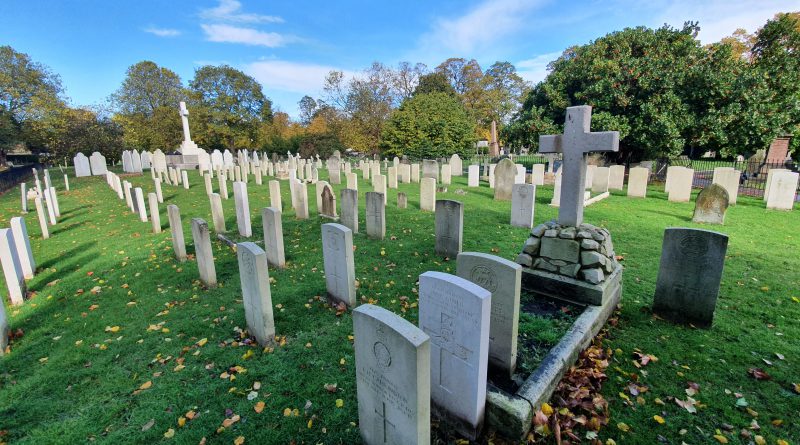 Located at Brompton Cemetery, this is the grave of Geoffrey Donovan Hadley. Geoffrey was born in Brixton (then in Surrey) in 1893 and he served in the 4th Dragoon Guards (Royal Irish), with service number D/7987. His sign-up papers have survived, he was working as a clerk when he volunteered to join the army, but this was before the First World War, on 19 March 1913 having completed his medical on 17 March 1913 and he went to Seaforth Barracks near Liverpool on 20 March 1913.

The records give lots of information about what he looked like, he was 5″7′ tall, he was 11.6 stone in weight, his waist was 35 inches, he had blue eyes and brown hair. He was Church of England, he had a pulse of 100 and he had a linear scar on his face, on the left-side of his forehead.

He died on 12 November 1914 at the age of 21 at the First London General Hospital in Camberwell, so he must have been injured on the battlefield and transported home although the records don’t give information about this. He was in the military for a total of one year and 249 days, which was carefully worked out by the authorities. His next of kin was listed as his father Edwin James Hadley and his step-mother, Mary J Hadley, who lived at 37 Comyn Road in Clapham, a residential property which is still there today.