It was my final day in Poland and Lukasz’s suggestion to go on a pirate galleon to Westerplatte didn’t seem like a bad idea. It required very little energy and involved sailing the high seas. Well, the Baltic Sea.

The company operating the trip has two boats that they use, which are quite different in design, but both look the part. We got to go on both of them, the Czarna Perła (the Black Pearl) and the Galeon Lew (the Lion Galleon).

They had live music with a man playing sea shanties, he was surprisingly good.

We had a little visit to Westerplatte, with the monument in the background. We only had an hour there which would have been insufficient to actually see the entire historic site. It was certainly much busier than when I had gone before in November 1996.

Our galleon arrives into Westerplatte, ready to sweep us back into Gdansk. We enjoyed watching some of the visitors trying to barge their way up the gangway to ensure that they got first entry to the boat…..

Watching the other galleon go sailing past us as we headed back into Gdansk.

The final trip was over as we arrived back into Gdansk.

I’d never noticed this sign before, but it’s on the entry to the central harbour area.

Lukasz, surveying the high seas and wondering what life would have been like as a Polish naval commander.

Me, wondering what free gift Greggs will be sending me this month on the app. 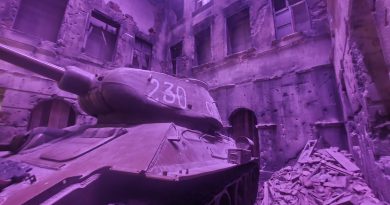