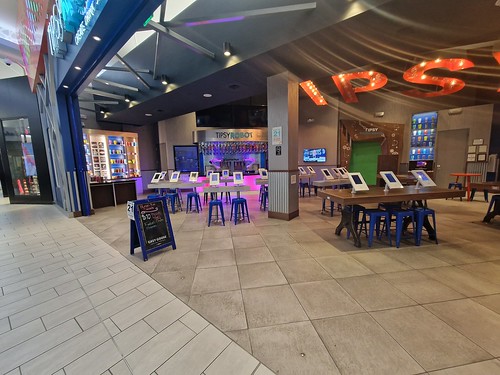 I’ll confess that I didn’t get one of the cocktails at this location at the Miracle Mile located within Planet Hollywood resort and casino, but I was suitably intrigued. It has been there for a few years and it’s a cocktail bar where the drinks are poured by robots which take bottles from hundreds that are hanging down from the ceiling (robots and bottles are visible at the rear of the photo). Customers order drinks from tablets located around the bar and then they are updated via the screen how their drink is progressing. I suspect that there might be more of these operations in the future, not for their novelty factor but instead to try and save on staff wages. Cocktails appear to be around $18 each which seems expensive to me, but is in keeping for prices on the main strip.

The venue is well reviewed, although there are the occasional ridiculous reviews such as one saying their were appalled that they were asked to leave as they had brought a small baby in. Nevada state laws are quite clear and I’m not sure that the licensing authorities accept an argument of “it’s OK as they’re too young to possibly be drinking” as I can see what will go wrong there. A few reviews say that they drinks were mispoured or not served and oddly customers have to wait 24 hours to 7 days to be refunded, if they’re refunded at all. There’s a lot to be said for human servers as if they malfunction midway through the drink the situation is usually recoverable to some degree.

2022 US Trip – Is this a Las Vegas scam on Fremont Street or did I miss something?