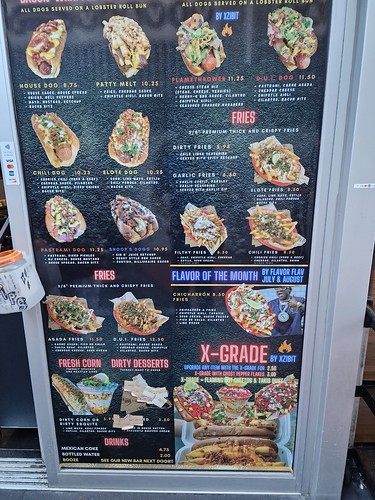 I had a plan to get a hot dog from the highly rated Dirt Dog and their bar, but I realised that the set-up is a little more complex insomuch that the food outlet is separate from the bar area. They’re neighbouring but at the time I could see no evidence either at the venue or on Untappd that the Dirt Dog bar actually sold decent craft beer and so I just got the hot dog. I wasn’t going to have a decadent hot dog and discover that I would have to choose between Bud Light and Miller Lite or something to go with it. Standards and all that. When I visited the bar element had only just opened which was why I couldn’t find out the drinks selection, but I’m pleased to note that there’s evidence now on Untappd that there are decent beers.

Anyway, I digress, the hot dogs were reasonably priced given the strip location and I liked the options available on the menu. If my friend Nathan had been there, I might have accidentally got the X-Grade extras for him as he likes hot food and surprises. And I mention this as it neatly segues onto my writing that the hot dogs used are Nathan’s Famous beef dogs, perhaps some of the best in the United States. Clever link there I thought. 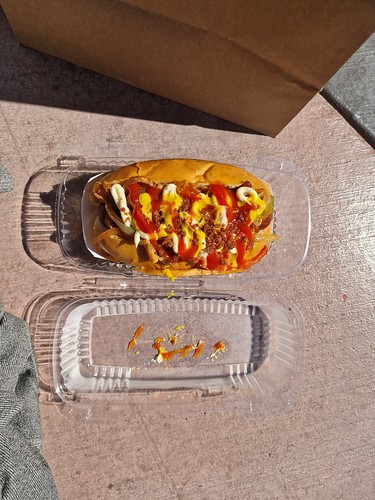 That’s some of the best packaging that I’ve seen for a takeaway hot dog, none of this rubbish of trying to serve it in paper. Very classy, although there was a lot of packaging waste to be fair, although it meant that the toppings were pretty much unimpacted. I had gone for the house dog with onions, bell peppers, house sauce, mayo, mustard, ketchup and bacon bits, with the whole arrangement being delicious and suitably meaty. It was a larger dog that the photo might suggest and so was as filling as I required for a quick lunch stop. I also had a delicious drink of Dr Pepper Cream soda to enjoy with it that I had picked up at Walgreens. And my friend Richard was so excited to read about this drink in my previous blog post that he’s ordered some cans to be delivered to him, I’m sure that he’ll be delighted at them.

I’d happily recommend this location and would probably go to the bar next time, as the staff at the food section were friendly and engaging. It was quite busy, but the service was prompt and everyone was given a number so they knew when their hot dog was ready and I think mine took around five minutes. Lots of choice on toppings, but the main part of the show – namely the hot dog – was entirely appetising so I imagine that all the menu items are delicious.