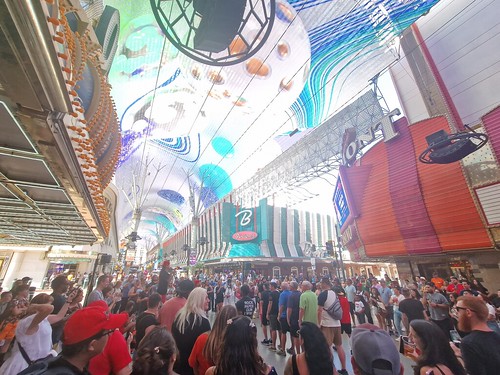 I wasn’t quite sure what to make of this little arrangement on Fremont Street and I have no idea whether it was something of a scam or not, although others at the location were claiming it was and I’ve seen some on-line reports saying the same thing happens. It’s a little odd as there seems to be quite a lot of regulation and organisation of pitches along Fremont Street, so I’m moderately surprised if there was anything that was seen as constantly damaging to tourism. And Las Vegas doesn’t like damage to tourism.

Essentially there was the announcement that “something big starts soon” and then nothing really did. There was a lot of calling for monetary donations, of which some people did, then a number of people were called from the crowd to stand in a line. They then were told to hold notes up which seemed to be taken away quite promptly and this was all part of the build-up to the main event. Indeed, even I was getting quite excited as to what decadent showmanship was taking place in front of me. But then two people from the line walked away, one quite angrily, and then the audience started to move away. This all took around ten minutes, so there was some considerable anticipation to the event. There had been some minor acrobatic performance, which received little crowd acknowledgement, but I thought that was some warm-up element. However, with the audience drifting away the event was then clearly over and there wasn’t much effort made to bring them back. But, maybe we all missed what would have been a spectacular event and maybe there was no scam at all.

I had forgotten about this until I read that there’s a problem with people doing exactly this in Times Square in New York, so perhaps I hadn’t just missed the point of the whole thing, perhaps the entire aim was to just build up anticipation and then never quite deliver anything. But, if there was something impressive that took place, others in the audience also missed it and a number shouted different degrees of abuse at the performers. It was all very strange. I hadn’t donated anything to this effort though, so I left feeling it was all quite interesting, albeit didn’t make any sense to me. I’d better add as well that I’m claiming the arrangement to be a scam, just that it did rather give the impression of not being very direct entertainment for the immediate enjoyment of the viewers. And maybe I misunderstood it all, that wouldn’t be the first time that I’ve got muddled up.