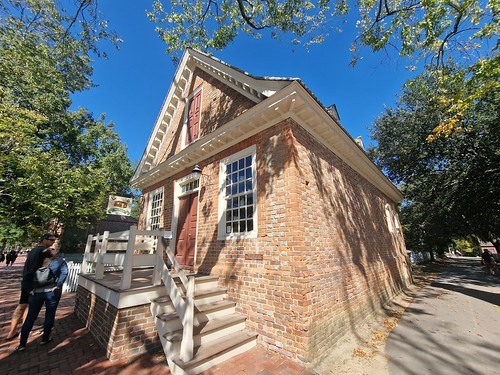 Known as Prentis House, this is the oldest commercial premises in Williamsburg, an original building which was constructed in 1740 under the supervision of the merchant William Prentis. He ran a general store here until his death in August 1765, with his family continuing to run the business until 1779. Prentis was English and had been educated at Christ’s Hospital in London because his mother had died, and this charity school gave what his father John, who worked as a baker, considered to be the best chance for William. William decided to go one step further and decided to travel the long distance to take an apprenticeship in Williamsburg under Archibald Blair, eventually taking over the management of the general store. His eldest son, also named John, served as the Mayor of Williamsburg between 1759 and 1760, whilst his youngest son, Joseph, became the Speaker of the Virginia House of Delegates and a judge in the General Court of Virginia.

I’m quite taken by the bravery that William must have shown in moving to Virginia after he left school in 1715 to try and make his fortune, or at least, have more opportunities than he would have done in England. I imagine that his father John never saw him again, that must have been a challenging situation for them both, but it seems that William did very well for himself and many of his descendants took important roles in the affairs of Virginia. And here’s a portrait of him….. Back to the building, which was used by many different businesses after the Prentis family left it, with it being used by numerous traders until the early twentieth century when it became part of Colonial Williamsburg.

2022 US Trip – Day 8 (Visiting Williamsburg Instead of Jamestown)