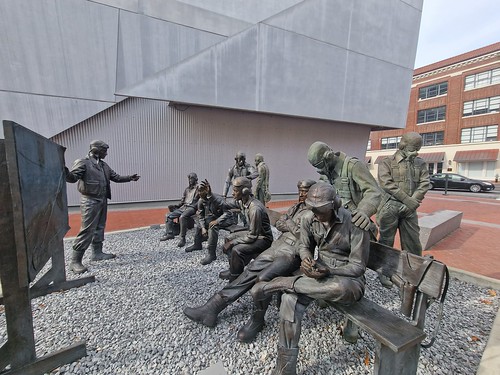 This sizeable sculpture is located outside of The National WWII Museum in New Orleans and depicts a pre-flight mission for pilots, commemorating the 88,000 US airmen who died during the conflict. It was designed by Major Fredric Arnold, himself a former combat fighter pilot who completed the art commission at the age of 94 and who died two years later on Memorial Day. He spoke honestly when saying he was worried that he might not live long enough to complete the work, but he did and he certainly delivered a masterpiece. 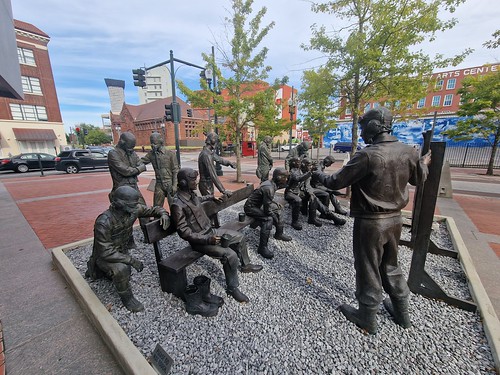 The empty place on the bench is designed to represent the place of the sculptor as he survived the conflict and it also symbolises the other survivors from the Second World War. 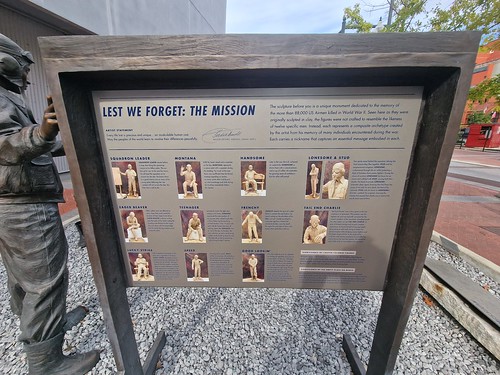 The display board which gives further information about each of the characters depicted, which aren’t designed to be specific people but instead to represent all those who died. All of these characters are emotive because they are based on various traits from people the sculptor knew, but perhaps no more so than ‘Frenchy’ who depicts the spirit of the pilot who died the previous day, “gently touching his comrades with a bond that cannot be broken, even after death”. It is all very powerful and I can see why they’ve chosen this to be outside of this nationally important museum.

There’s a web-site to this sculpture and some FAQs answered by the sculptor and this is a striking and eloquent piece of prose:

“When asked to visualize scenes of WWII aviation, many think of the aircraft of that era or stylized dogfights unrealistically portrayed by Hollywood. Almost none of the public stop to think, however, about the daunting challenge which faced these young (typically 19-21 years old), ill-trained (90 hours total flight time) pilots prior to each mission.

During much of the war, the death rate among fighter pilots was so high that, statistically, it was a certainty that none of us would survive 50 missions to come home. In spite of that knowledge, each pilot made the conscious decision to board their aircraft and leave the safety of their home base to fly toward the battle. Day after day. The scene depicted by this sculpture is intended to capture a poignant moment in time when the mission is laid before the squadron and each pilot recommits himself to go again, even as they feel the presence of pilots already killed and not yet gone or forgotten. In truth, we faced a harrowing real life example of Russian Roulette.”

The scale of the help of the American forces is explained by the Imperial War Museum:

“Over two million American servicemen passed through Britain during the Second World War. In 1944, at the height of activity, up to half a million were based there with the United States Army Air Forces (USAAF). Their job was to man and maintain the vast fleets of aircraft needed to attack German cities and industry. Working with the Royal Air Force (RAF), their aim was to severely weaken Germany’s ability to fight. This was a central part of the Allied strategy for winning the war. American women also served, working for the American Red Cross or as members of the Women’s Army Corps.

Over 200 airfields were occupied or newly-built by the USAAF. Each one would house around 2,500 American men – many times the population of the nearest village. Thousands more were based at smaller sites. Halls and country houses became headquarters for commanders and planners. Some were converted to hospitals or rest-homes for combat-weary fliers. Barns and outbuildings would house teams of truck drivers and their vehicles. Even specialist bakery units were dotted around the UK, providing fresh bread for the airmen.”