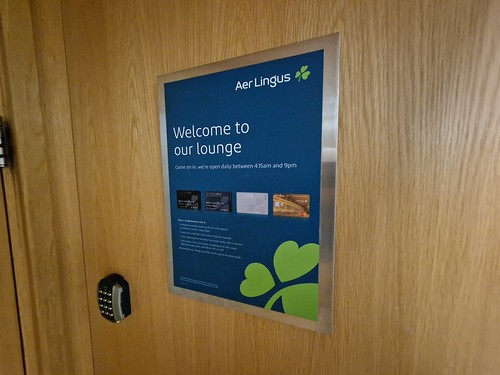 I had thought that the Aer Lingus lounge opened at 05:30, but it actually now opens at 04:15 which I thought was something of a result for my needs. The entry system here is a bit complex as Aer Lingus isn’t part of Oneworld, despite being owned by IAG who own British Airways, but they do allow entry to silver and gold BA card holders going to Heathrow and Gatwick when flying Aer Lingus. Although I had read this on Flyertalk, it’s noted on the door as is visible on this sign. 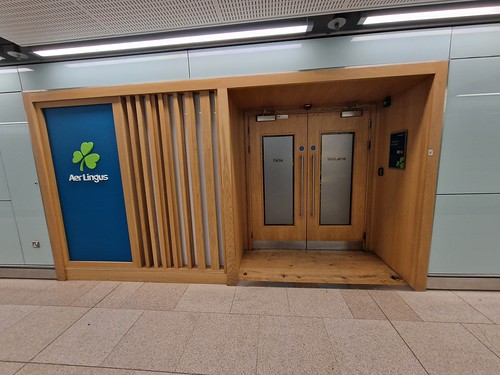 I arrived two minutes before the lounge opened and patiently waited outside, with the lounge opening dead on time. The member of staff seemed quite hostile though, which was unusual and I can’t recall that at an airport lounge before. Her welcome was “yes?” which seemed odd, I thought the little queue that had formed, and which I was heading as the earliest to arrive, were all likely to want to come into the lounge. Perhaps they get some sight-seers though and she was just checking.

I mentioned I had a BA flight to Heathrow, flying with Aer Lingus and had my Oneworld card. She then replied that this didn’t allow entry into the lounge as Aer Lingus weren’t part of Oneworld. My digital card has Oneworld on it, not BA, so I mentioned again that I was flying to Heathrow with Aer Lingus and had my BA card in case that made things better. She told me again that Aer Lingus weren’t part of Oneworld, before I apologised (as I’m British and assumed it was my fault) and then said as politely as I could said that I just wanted to gain access in accordance with what was on the door. She then let me in, but then started on the next person saying that his lounge card wasn’t valid. Whatever happened, he too arrived in the lounge about fifteen seconds later. I imagine it would be quite entertaining watching this, I might move a chair into the reception area if I visit again.

I have a slight suspicion that the lounge management have told the staff to try and minimise the number of entrants, as by the time I left an hour later it was very busy. It’s probably not a great strategy though. But, that matter to one side, I was in. 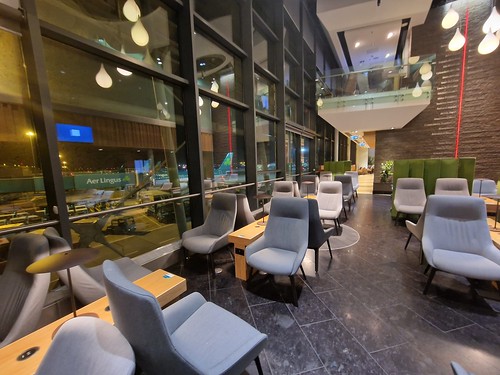 It was spacious, comfortable and there were plenty of different seating types. I like high seating so I can use my laptop and that was available by the food, so that was my seating arrangements decided. Also, it was the second time in two days that I was first into an airport lounge, I think I must be a bit desperate for airport entertainment at the moment. 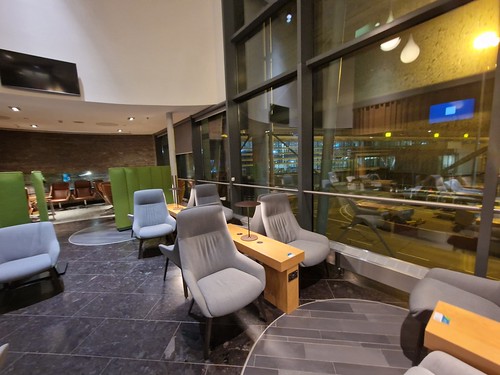 The lounge was also clean and tidy, although perhaps that was inevitable given that I was the first person in, but everything was well maintained as well. 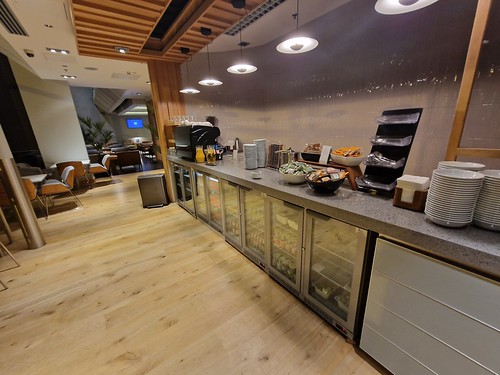 The food area, where there were yoghurts, biscuits, cereals, fruit and the like. It was all self-service and although relatively basic, it was handy to get coffee and biscuits to start the day with. I say “start”, although I’m not sure that I had finished the day before at that point. 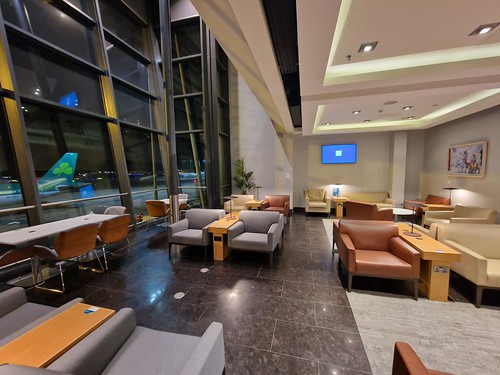 Very pleasant and there were views onto the runway as well for those who wanted to spot aircraft. 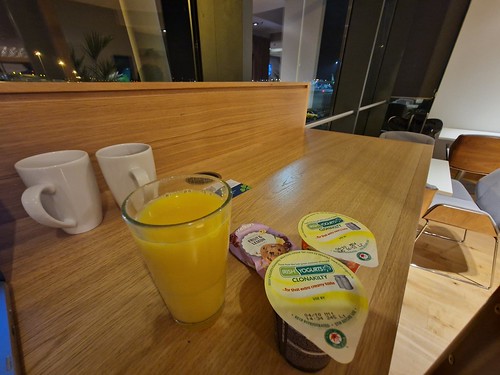 That was a perfectly nice way to start the day and I was delighted that Aer Lingus had opened their lounge early as it meant time seemed to progress much quicker before my 06:30 flight to Heathrow. It’s not a hugely impressive lounge in terms of the food offering, but it was more than sufficient for me and I understand things get a bit more substantial later on during the day in that regard. It felt a modern and well designed lounge, better than I had expected.

As a repeat of the rules, BA silver and gold card holders can use the lounge if flying with Aer Lingus to Heathrow or Gatwick. The rules are though complex, but I did think the staff members could perhaps be slightly less confrontational, as someone who wasn’t sure of the rules would have likely just left without going in. But, I left happy, so all was well with the world.