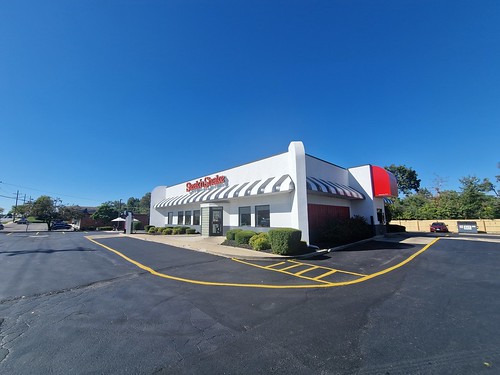 Deb had heard good things about this chain, which I must admit that I hadn’t previously been aware of, despite them having over 600 locations across the United States. Note the recently tarmacked exterior, they’d been getting some complaints about trips and falls. One customer noted:

“That being said, it’s dangerous just to come here! There are Giant potholes EVERYWHERE. It’s litterally not safe for your car to come through the drive thru. And if the outside is this bad, it makes me question the integrity of the inside and it’s standards.”

I was a little disappointed to not actually see this showcase of potholes. 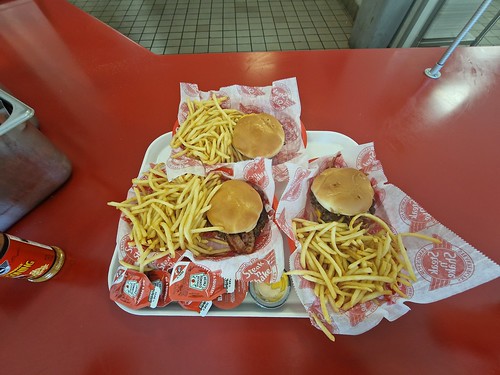 I’d note firstly that this was food for three of us, not just me. I had to look up the difference between a steakburger and a hamburger, with the latter being made up of minced beef rather than individual cuts of beef, although I’m unsure if there’s much differentiation here. Anyway, I really liked this, the beef was juicy and rich in flavour, the fries were thin and crispy and the Dr Pepper was bottomless. The prices were reasonable and there were plenty of special offers available, with the whole offering being better than McDonald’s in terms of quality and not much more expensive.

The environment was generally clean, although the floor was one of the stickiest that I had encountered which I think is down to the presence of lots of spilled drinks rather than some overly adhesive cleaning product. The service was friendly, with customers ordering via a self-service machine and then the staff member calls out the order number when it’s ready.

I’d definitely go back to this chain if I was in the United States and I see that they’re trying for an expansion into Europe. The real problem here is potentially their name. They don’t serve steaks, they’re a fast food burger restaurant, but that’s not what the company name suggests to a European market at least. They did open in Chester in the UK in 2016, but that restaurant closed after two years and I’m not sure that this concept is easily transferable. It also seems that the company have spent years battling their franchise holders, something which rather did for Quiznos, my favourite sub fast food chain.