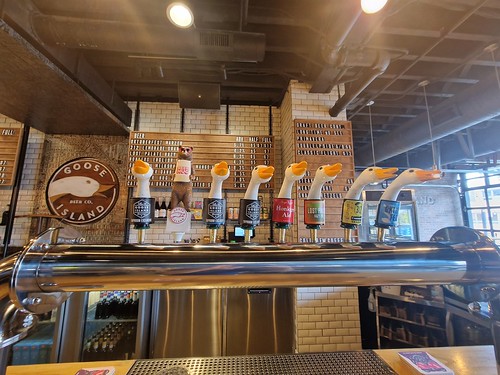 I’ve already mentioned that my first impressions of this bar were positive as a staff member was welcoming and immediately moved my brewery tour forwards without any issues. That gave me an hour to try some of the beers before the tour and then I could spend longer at the bar after the tour. If I still sound excited about this tour, that’s because I was rather looking forwards to this. 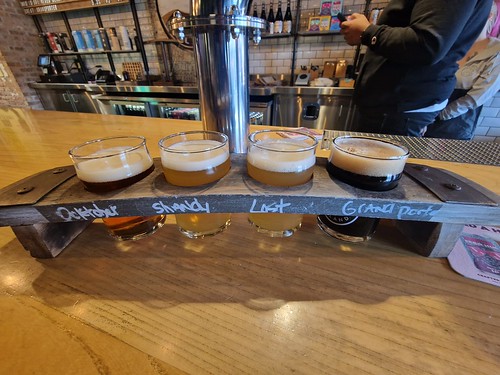 The bar doesn’t really do flights other than of their four core beers. I asked if any of these would be in the tour and the manager went off to check with the tour guide and it was apparent that one would have been duplicated, so they merrily gave me a different beer on this flight to avoid duplication. I appreciated that they didn’t find it odd that I didn’t want to have the same beer twice, but I have an Untappd account to keep varied…. 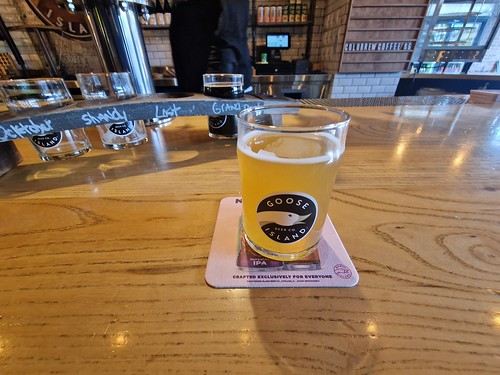 I wasn’t expecting overly exciting from these four beers because they’re designed to be a little generic as part of their core range, it’s the dark beers which Goose Island is perhaps best known for. However, this is the Lost Palate NEIPA which I very much liked, not least because I like mangoes and cinnamon and they’re the ingredients that power through. All very pleasurable and I liked how clean the whole bar was, the staff seem very proud of this venue. 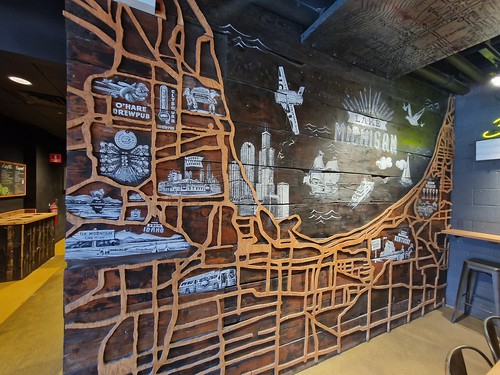 The service was impeccable, personable and timely. Despite being run by a large corporate business, this feels on-trend and slightly edgy in an exciting way. It’s at this point that I went off to the do the brewery tour, which I’ll post about separately. 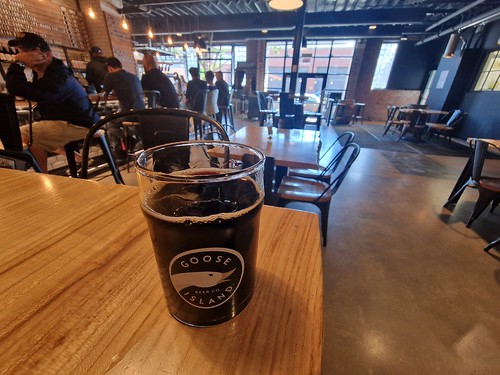 Back in the taproom, the bar gave me this beer, but I can write with confidence that this didn’t impact on my next comment. And that’s because this is perhaps the best beer that I’ve had. This beer has an Untappd rating of 4.72 and the best rated beer in the world is sitting at 4.77, so that puts that a little in perspective. At the time of writing, this is the 13th best rated beer in the world and it’s the Rare Bourbon County Brand Stout 2015 edition.

I’m going to struggle to describe this 14.8% beer in a manner that gives it justice, but this is a barrel aged stout where the flavour is rich, smooth and every sip has an impactful taste. It’s also complex, with a sweet flavour but yet being full bodied with hints of chocolate, vanilla, fudge and heaps of bourbon. It might be thought that a 14.8% beer would be just too high in alcohol, but there was no sharp edge to this and it almost had port like richness. Intense, exciting, decadent and as perfect a beer as I can possibly imagine.

I’ll leave this post here, I think I’ve made sufficiently clear that this is one of the best bars that I’ve visited. Pitch perfect service, environment, cleanliness, customers, beers and surroundings.