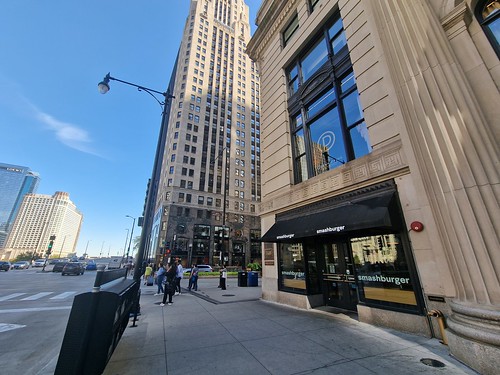 En route back to the airport, I had a little pop into the Smashburger at Michigan Avenue in Chicago. I had intended to look at the menu online in advance, but for reasons known only to Smashburger they’ve blocked it to UK phones. The company were purchased by Jollibee in 2015 and they’re planning a rollout in the UK both for their main brand and also for Smashburger, although they haven’t got very far with either yet. 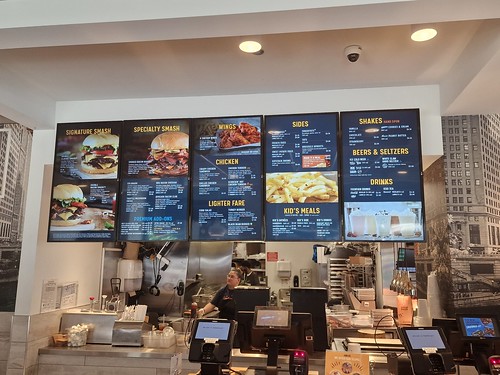 The menu board, with customers ordering at the counter and then a staff member brings over the order. The chain are meant to be noted for their craft beer, but one look at the generic rubbish they were serving put me off that idea. I was also just slightly annoyed as I headed to the toilet, which was a hike of the like that JD Wetherspoons require in the UK, before I saw there was a code required which they hadn’t listed on the receipt. I then had to trek back to the counter whilst obviously by now being concerned that my food might be ready. I’d hate to think that I was late for food…..

As a positive though, the dining area was clean and well presented, with power points available which was particularly useful as my phone battery had started to get lower than I would ideally like having spent several hours meandering around Chicago. 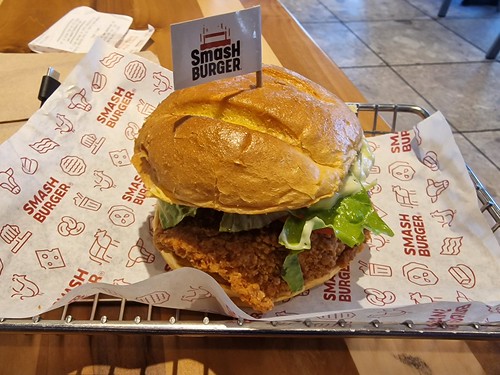 It took around ten minutes to arrive, so I was back in time. I just had the burger as I thought I’d get a snack at the airport and this was all entirely adequate, but not particularly exceptional. The chicken was more firm than moist, all really quite run of the mill. The highlight of the visit was watching someone drop a cup full of ice all over the floor and they then patiently tried to recover every piece despite the logistical challenges of going under tables to find them. I was impressed at their effort to be complete in their task, as I think I would have left the ones under tables. But, I digress. I wasn’t sure that I could see anything of particular interest in the chain, so I’m content to have ticked it off my list of fast food restaurants without needing to make a return visit.