One railway museum is likely enough for one day, but in addition to visiting the Head of Steam in Darlington, it seemed worthwhile to get off the train en route to Bishop Auckland to have a look around the Locomotion museum. This name change confused me slightly (actually quite a lot), I thought that it was known as the National Railway Museum at Shildon, which seems rather more appropriate to me, but there we go. There are more photos at https://flickr.com/photos/julianwhite-uk/albums/72177720302071941 should anyone be catatonically bored. 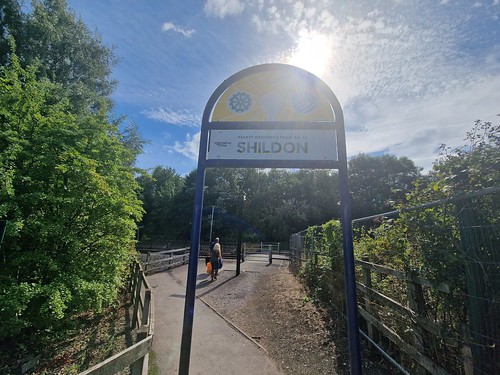 It’s a short walk along the track (not literally along it, there’s a path to the side) from Shildon railway station to the museum and I thought I’d visit for an hour before catching the next train that would take me to Bishop Auckland. 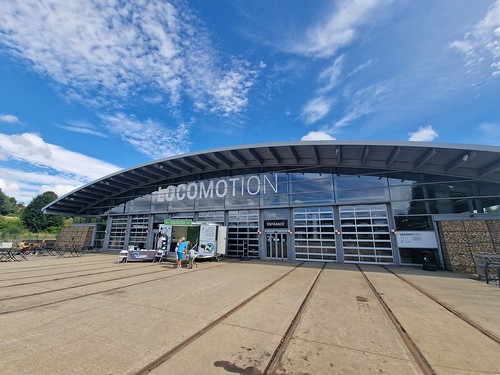 The museum, opened by the  then local MP and Prime Minister Tony Blair in 2004. They’re undergoing a large modernisation project which will see more exhibition space given how popular the museum has become. I very much like how easy it is to access by rail and as part of the modernisation project they’re restoring some of the other station buildings. There’s more about this project at https://www.locomotion.org.uk/about-us/our-future-vision-2025. 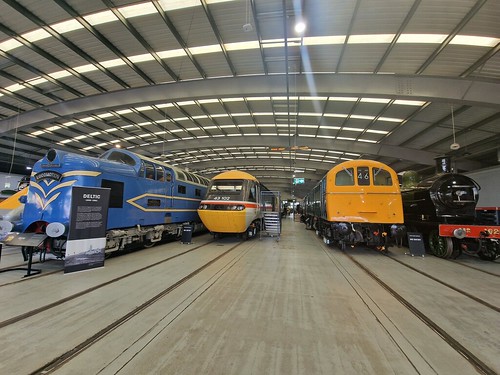 At the moment the museum is effectively a large shed full of locomotives, carriages and some other related items. They have very few smaller items relating to railway history, they’re mostly at the National Railway Museum in York. 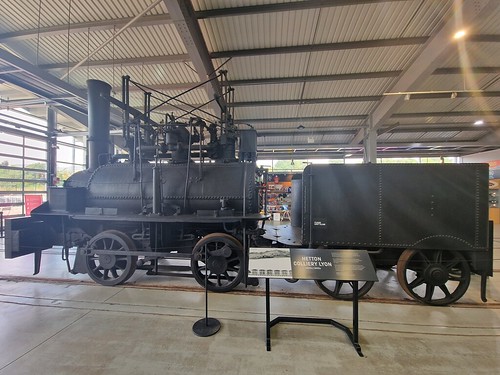 This is Lyon, the Hetton colliery locomotive, although I feel that I’ve introduced it as if it’s something from Thomas the Tank Engine. It was probably built in 1852 and improved a bit in 1882 when they rebuilt it, remaining in service until the early twentieth century. It was an important part of the 1925 centenary of the Stockton and Darlington Railway, an event organised by LNER, but I think they thought at the time that it was older than it was. The museum is hedging its bets by having both dates on there, the 1820s and the 1850s, with a possibility that this is a genuine George Stephenson locomotive. 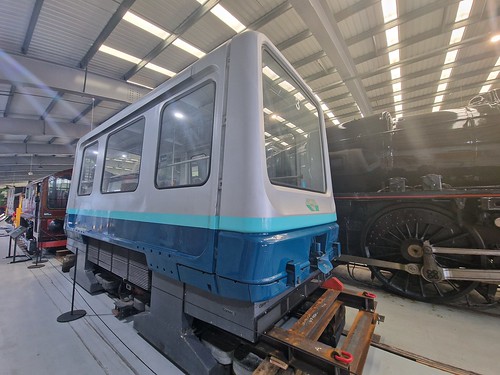 A Maglev railway car from 1984 which glided from Birmingham International Airport to Birmingham Exhibition Centre and it’s hard to think of anywhere more glamorous that they could have installed it. Quite excitingly, this was the first Maglev railway in the world, although it was a bit rickety and expensive to repair so they decommissioned it in 1995. As an aside, I’ve been on the Shanghai Maglev train, which is quite phenomenal at 268 mph (431 kmph) and is so fast that by the time it reaches full speed it has to start slowing down again. If that train fell off the track, it would launch itself hundreds of metres away. Well, that’s my best guess, I’m not an engineer to make such calculations, but as a journey I remember it being very smooth. I digress though, I don’t think the Birmingham one went as quickly. 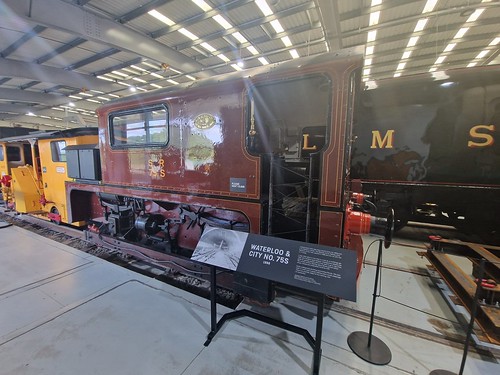 I hadn’t planned to take so many photos, although that is usually the case, but there were plenty of shiny things to distract me in the museum. This is a Waterloo & City carriage from when the line opened in 1898, which is handily my favourite London Underground line. This carriage was constructed in Woolwich by Siemens Brothers, relations of the founders of the German company. It remained in use on the line until May 1968 and it was only retired then because of electrical burnout. It then apparently went to Brighton, for reasons I’m unaware of but perhaps they just thought it deserved a little holiday, before becoming part of the national railway collection. 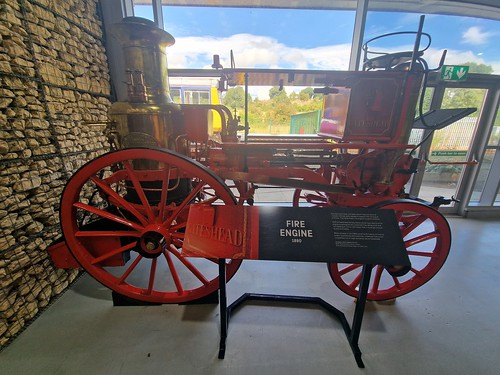 Here’s a nice red fire engine, dating from 1880 and this was used by the staff at Gateshead Railway Works. 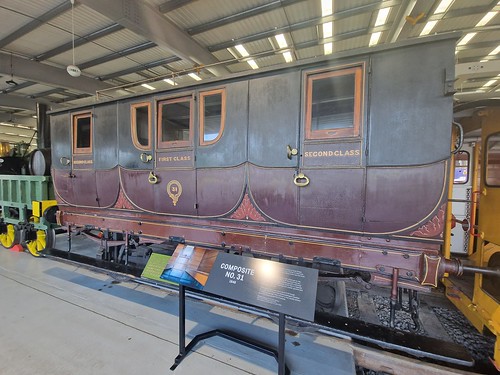 Composite 31, which sounds like a discussion point at Labour’s party conference, dates from 1846 and there’s a first and second class section. The board notes that anyone in third class would have a much worse journey, as the carriage often didn’t have a roof, didn’t have seats and was packed full of people. Perhaps I won’t moan quite so much when Greater Anglia put the Stansted Express rolling stock on the London to Norwich mainline. Although I probably will. 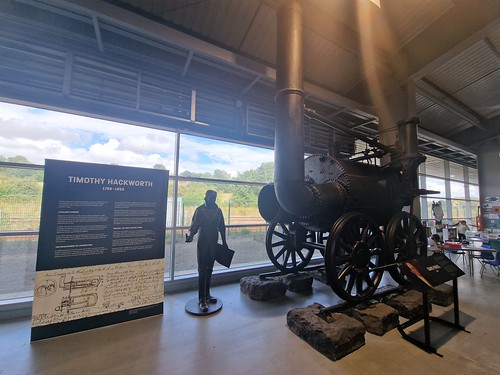 Timothy Hackworth, who lived locally and who was important in building the local railway (more at https://en.wikipedia.org/wiki/Timothy_Hackworth), with what is left of his Sans Pareil original locomotive. This was presented to the Patent Office Museum in 1864, which in turn became the Science Museum and then it went to the National Railway Museum. It’s interesting how these things evolve, there was a lack of foresight in creating a national railway museum in the late nineteenth century and they were partly inspired by Nuremberg’s railway museum which had just opened. GWR got bored of waiting and after having saved their early North Star locomotive for display, they instead cut it up in 1906. They realised this wasn’t ideal when a museum opened, so in 1925 they stuck some bits of the original they found back together as part of a replica. That replica is now in the Great Western Railway museum in Swindon and I can’t remember if I even knew there was such a thing, but I now want to go there. 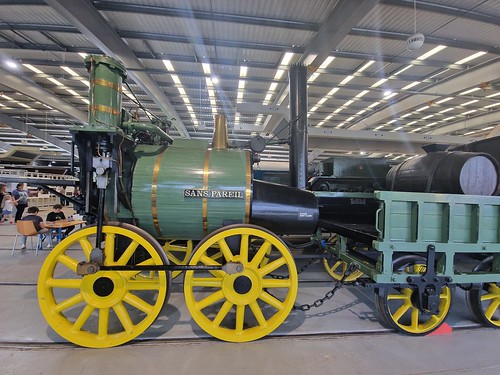 A prettier version of Sans Pareil, a replica which shows how colourful the original might have been. The locomotive means “without equal” and the original dates from 1829 whilst the replica is from 1980. 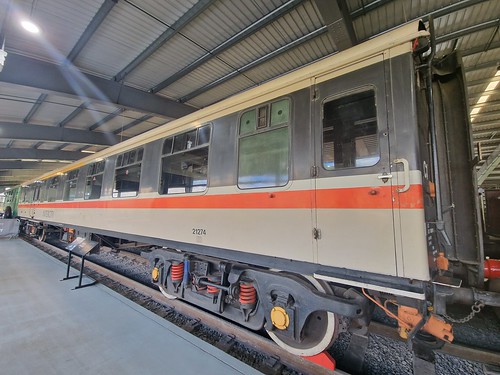 A good old Intercity branded British Railways Mark 1 carriage, although it dates from 1964 which predates that branding. 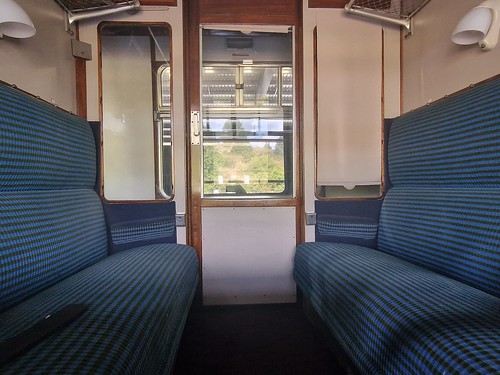 I don’t like corridor trains and I’m glad British Rail got rid of them and there aren’t any on services today in the UK (other than on heritage, preservation and private railways). They still have them in some European countries, including Poland and Ukraine, although I think they’re being phased out in Poland. I think the Ukrainians are busy with other things at the moment to be fair. 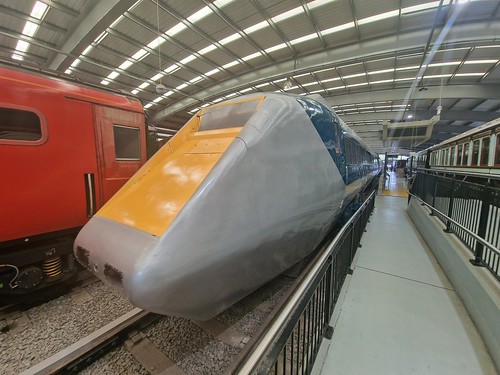 This is an early tilting train, the APT-E (Advanced Passenger Train Experimental) produced in 1972. ASLEF were horrified at it and their drivers were banned from using it. British Rail decided they’d test it for a few years, which they did and in 1976 they sent it to the National Railway Museum for preservation. But, they didn’t stop there and didn’t give up, the engineers then developed APT-P (Advanced Passenger Train Prototype) which was tested until the mid 1980s when it was scrapped due to a lack of money in British Rail. They did sell some of their technology to Fiat Ferroviaria for use in their development of the Pendolino train, so we helpfully supported another country’s tilting train technology. 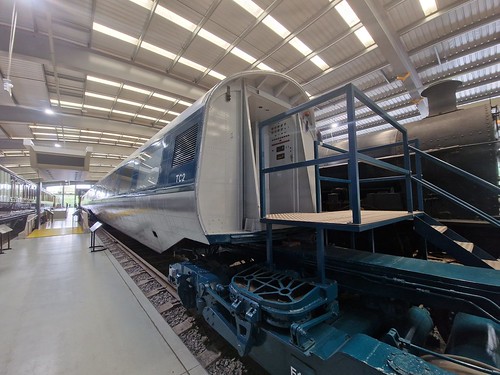 TC (Trailer Car) which was attached to the APT-E, more of which at http://www.apt-e.org/onthemove/tc2.htm. 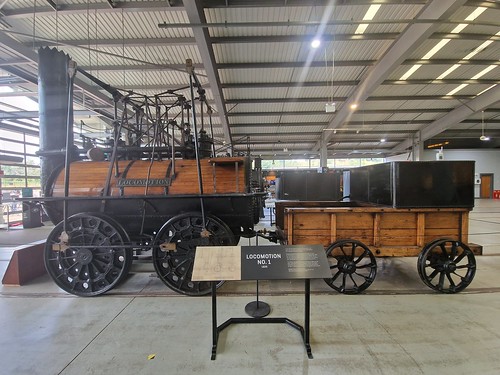 I mentioned that earlier in the day I had been to the Head of Seam Museum at Darlington North Road railway station and there was some sadness when they lost the Locomotion No. 1 locomotive which had been there between 1975 and 2021. I thought it was a little unnecessary of this museum to call it back from loan so they could put it on display here, as they’ve got rather enough trains of their own to play with. It did though mean I still got to see this early steam locomotive which was built by George Stephenson and Robert Stephenson in 1825. It’s heavily restored now (I often wonder how much of the original I’m ever looking at with these things), but some bits of it are original and from when it pulled the first train on the Stockton and Darlington Railway, making it the first locomotive on a public railway anywhere in the world. I think that’s some claim to fame. It sped along at 15 mph, which I think is about the speed that the Greater Anglia train manages on the East Suffolk line today. 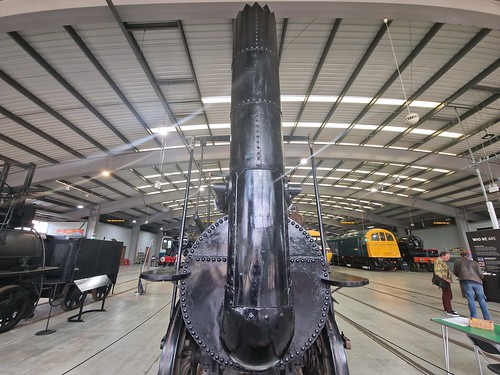 I was of course impressed at this historic piece of metal, but the museum has just placed it amongst their other trains and I don’t think they’ve made much of it. The Locomotion museum seemingly upset a fair few residents of Darlington over this and they’ve promised to lend it back to the Head of Steam museum in the run-up to 2025 when it’s 200 years old. Anyway, enough of my stirring up a local argument about where to store an old train…. 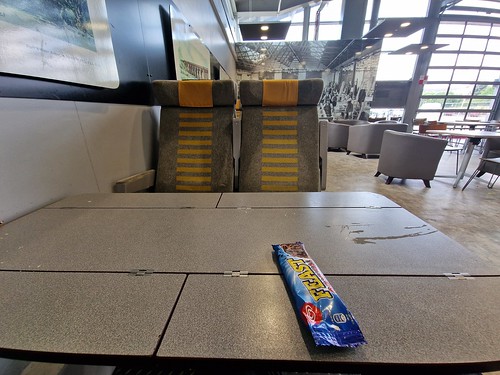 As it was very hot, yet again, I decided to go to the museum’s cafe where they have reclaimed train seats to get a Feast. Such decadence….

Anyway, I very much enjoyed this museum, although I only had less than an hour there, although that was enough to see a good selection of locomotives and other exhibits. There’s no admission charge, a policy in common with the Science Museum and the National Railway Museum, so that was a bonus. I took far more photos than I had expected and there was certainly enough to see to make a visit last a couple of hours. BTW, the Feast was delicious if anyone wondered.