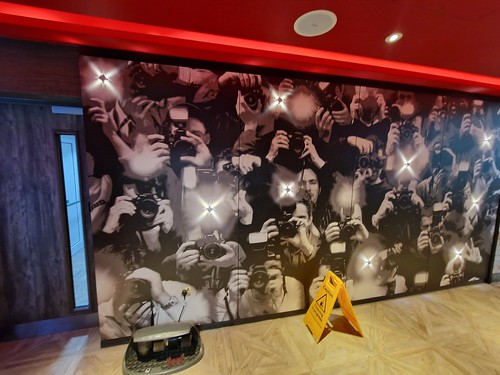 I liked the Ealing Ibis Styles, my first time there and it was a quiet and peaceful hotel with some strong movie related theming. The reviews aren’t great for the hotel and some are complaining that the hotel is charging for luggage storage, which is odd as I’d have thought that should have been included. I was fortunate to get this hotel for a reasonable price, the cost of staying in London is becoming ridiculous at the moment, well above pre-2020 prices. I hope for selfish reasons that this trend doesn’t continue permanently otherwise I’ll hardly be coming to London at all. At the moment, a single night at a city centre Travelodge is the same price as seven nights in an Accor hotel in some parts of Poland. 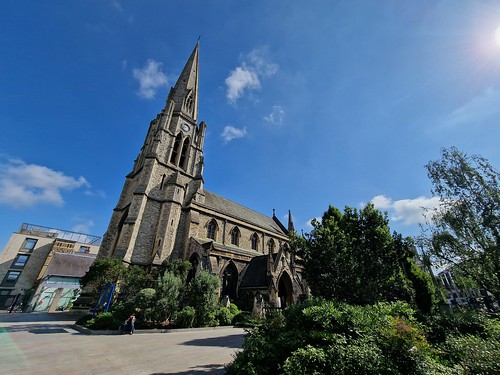 It was a pleasant day (well, too hot really, but I nearly always think it’s too hot as soon as the sun comes out) and this is Christ the Saviour Church in Ealing. It’s not that hard to guess the designer of this beautiful building, it’s Sir Gilbert Scott. Built in 1852 when Ealing’s population was starting to rapidly increase, it was damaged during the Second World War, but sensitively reconstructed and there’s plenty of foliage today around the building. 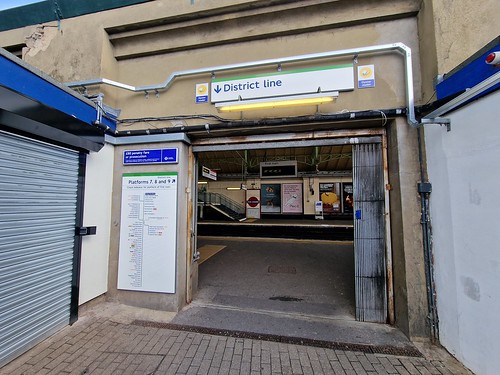 Fortunately, the underground strike of the previous day had come to an end, so the District Line was open again at Ealing Broadway Underground station. Note the old style signage of the station in the background. 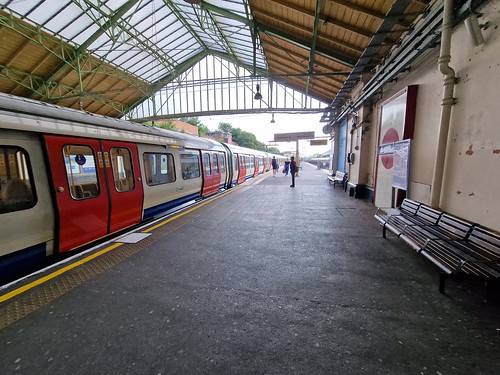 It’s visible on the right hand side of this photo as well TFL note that these are originals, with the design dating to the early twentieth century. As an aside, you can buy original signage from the Underground at https://www.ltmuseumshop.co.uk/vintage-shop/underground-signs. It’s the kind of thing that I’d like, but it’s far too expensive and it’s not clear to me why I’d want a sign from London Liverpool Street in my flat. Although I would, I’d even appoint my friend Liam as the civil engineer responsible for the installation work. 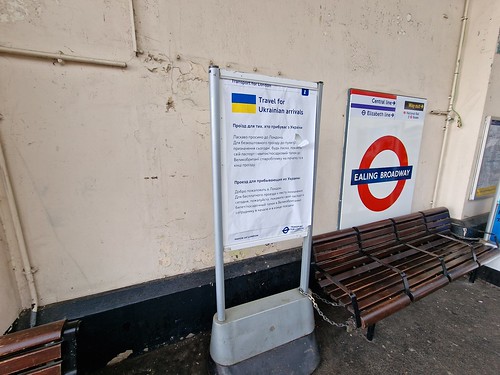 All credit to TFL for this signage to help those coming from Ukraine. 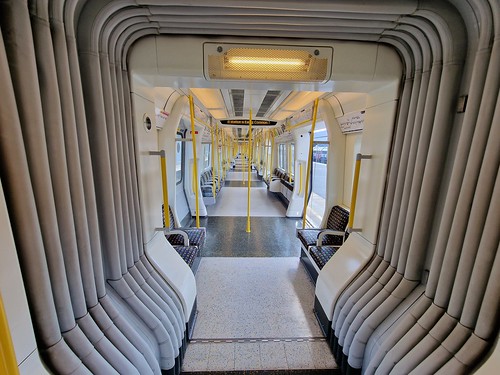 Not many commuters on the Tuesday morning District Line service into central London. They try and paint the poles the same colour as the train service, so yellow for the Circle Line. It doesn’t always work out though, the District Line is green, but sometimes the lines share trains. 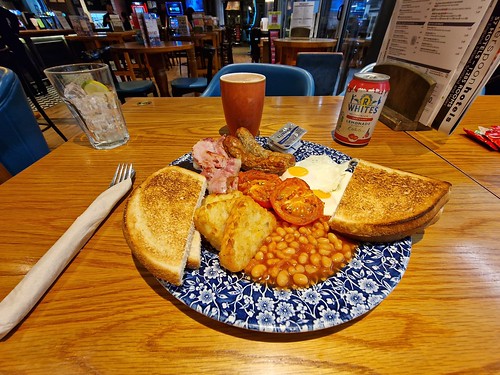 A quick Wetherspoons breakfast alongside countless refillable coffees, although it’s not entirely clear to me what they had done with the sausages, but I’d probably be best not knowing. I’m very productive in these surroundings and the coffees were delicious. 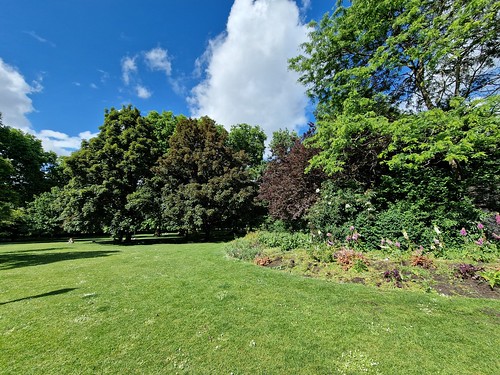 It was too hot so I went to St. James’s Park for a little while, a 57 acre park which was once land owned by the Palace of Whitehall. 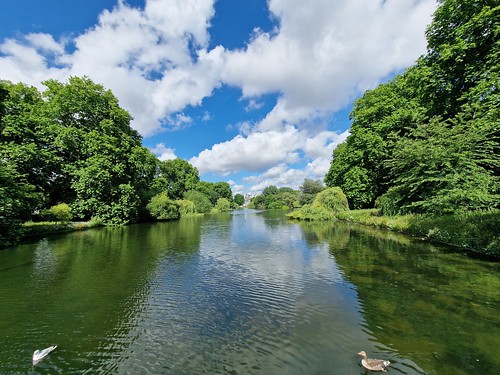 This canal was added in the seventeenth century, although it doesn’t really go anywhere and is now more of a lake, they just diverted the Tyburn I think to fill it. 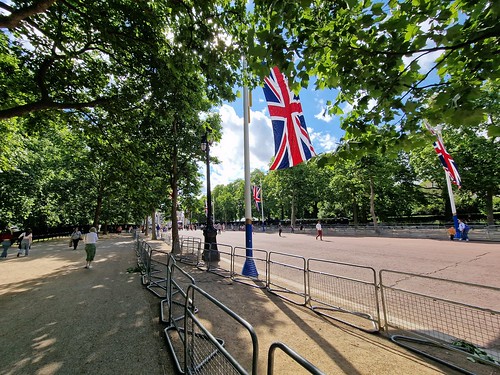 I was here a couple of days after the Jubilee weekend, so a lot of the barriers were still present and endless flags, although they might be permanent. The Government seem to be trying to put the union flag in as many places in London as they can and Priti Patel seems to spend most of her time standing in front of one. Anyway, I mustn’t get distracted back into politics. 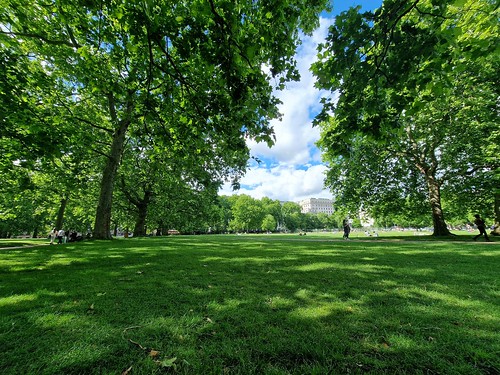 I was annoyed at the heat so sat in Green Park trying to avoid the sun. The park was landscaped in 1820, but is one of the plainest of the parks, just lots of grass, but that suited my needs on this boiling hot day. Bloody global warming. 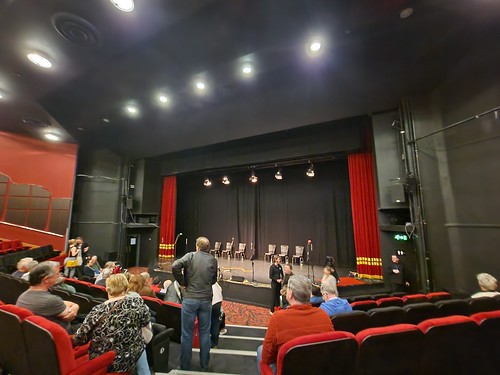 I had free tickets to the recording of Alone, which is a BBC Radio 4 comedy. It’s been going for a few years, but I’d never heard of it and half the audience also put their hands up saying they hadn’t heard the show before. This was by far the quietest of the shows that I’ve been to, the audience were only in the first few rows, although I think they had enough people to make it all work. 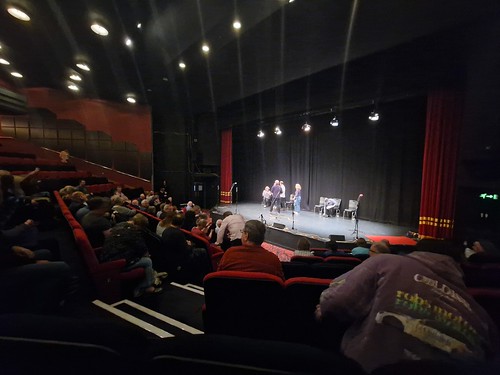 Another one of my hopeless photos, but this was the break and the performers (or whatever the word is) were just leaving the stage. There’s Angus Deayton, Pearce Quigley, Abigail Cruttenden, Kate Isitt and Bennett Arron. I like watching the process of recording these shows and how much of it has to be re-recorded because someone has made a mistake, there’s been a sound issue or something else went wrong. I hope the others wouldn’t be offended (although it hardly matters, they’re not going to read this) but I’d only heard of Angus Deayton and Pearce Quigley, the latter from the Detectorists. Anyway, it was all very entertaining. 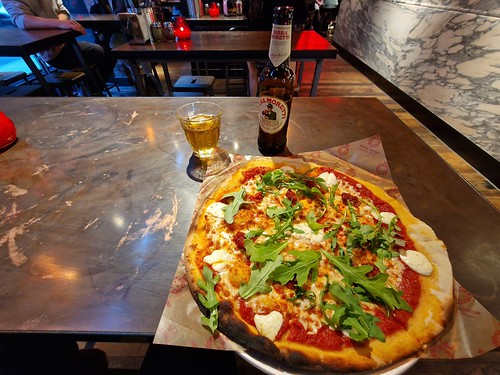 A pizza from the very reliable and affordable Pizza Union chain, although I was conscious at this point that I should really get a move on to get to my hotel in Heathrow. I always have a slight fear that my hotel room will be resold and that would be a faff to resolve. 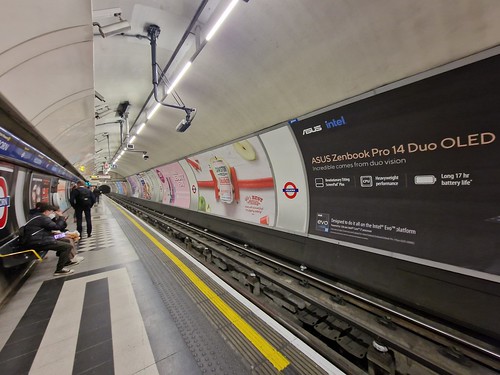 I had an hour’s journey on the Piccadilly Line from Holborn to Hounslow Central, where I would get a bus to the hotel. To my great annoyance, Heathrow still haven’t reinstated the Free Travel Zone around the airport, so I thought I’d get a bus from Hounslow instead of faffing about at the airport. 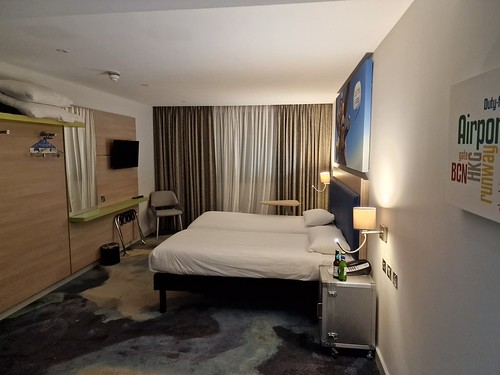 The Ibis Styles Heathrow Airport room, where I stayed a few weeks ago, and I’m conscious that I need to work on my Accor web-site that is getting only slightly bigger very slowly, so I’ll write more about this stay there in due course. The room has a modern feel and I tolerate the lack of desk as that small table is sufficient. That also isn’t an oil slick on the floor, it’s the design of the carpet, which is clever as it hides any stains that guests might leave by just looking like it’s stained anyway. No problems though with my stay, quiet and comfortable with everything as expected. 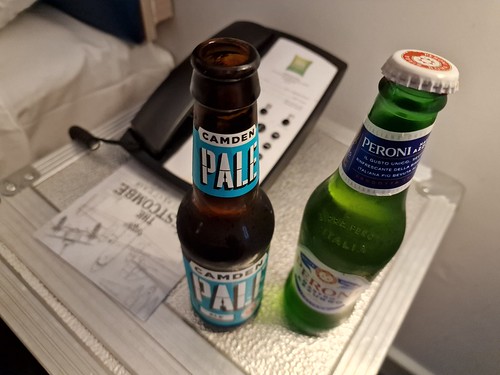 The free welcome drinks, with the excitement for me that I was going overseas the next day. I never tire of that excited feeling and I wonder if I ever will.