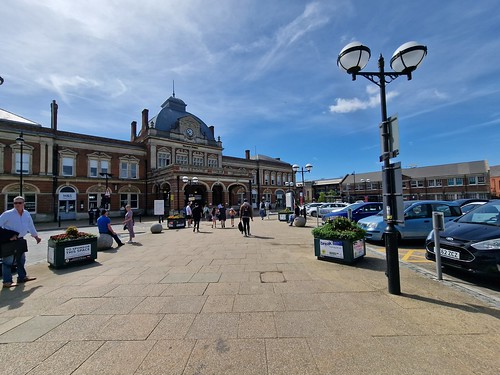 Using the railways seemed exciting a few weeks ago, there was a rail sale, the network seemed in good shape and I got a ticket to go from Norwich to Peterborough for just £4. Rolling forwards, there looks like a summer of turbulence on the rail network with strikes and other outages, it’s really not ideal for those without cars. On a brighter note (for me, as I’m not sure anyone else would care), this was the first day with my new phone, so the photo quality may, or indeed may not, be marginally better. Just to show how unobservant I am, this is the first time that I’ve noticed you can sponsor a flower box (or whatever they’re called) in front of the railway station. 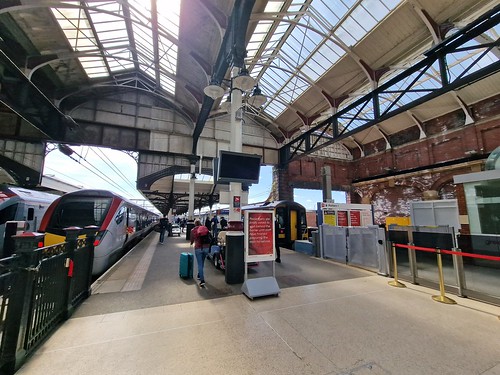 The train on the left is going to London Liverpool Street and the train on the right, which I was catching, was going to Liverpool Lime Street. I mention this as the conductor made three announcements on board about the difference, so there must have been a number of passengers getting confused. It made me wonder which destination I’d prefer, and I’d be happy with either, but I think it’s time that I go to Liverpool again. Although there’s a direct train there, it’s usually cheaper and even quicker to go down to London and back up. Actually, it’s a shame that the conductor didn’t give some numbers about how many people got on the wrong train, to spice the story up a bit. Is this a regular problem he has? 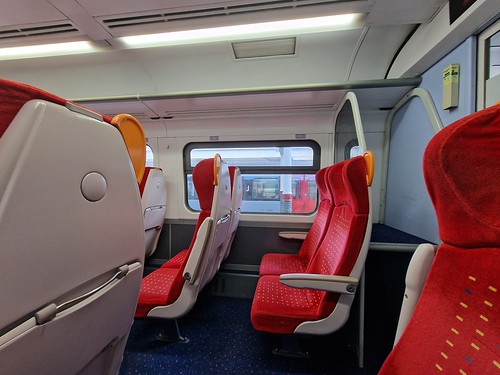 It was a relatively quiet service and these trains must be some of the last not to have power sockets of some kind. The conductor, who seemed quite chatty with his announcements, also mentioned at Ely not to be worried that the train goes into the railway station in one direction and then back again in reverse on the same track. I have mentioned to people in the past not to be worried about this (not pro-actively, I don’t tell people on the off-chance they don’t know, they have to look concerned for me to intervene) so I liked that the conductor explained the reversing technique used here. 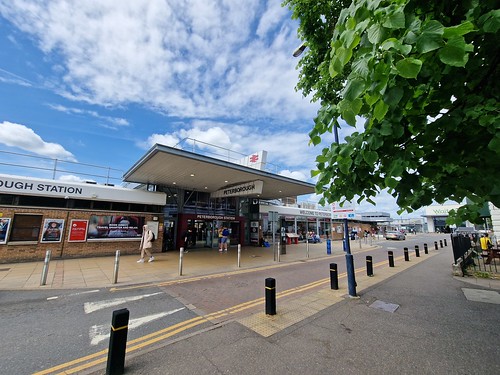 We arrived on time into Peterborough and this pleased me, as there’s little point in hoping for Delay Repay when the ticket only costs £4. I’ve been to Peterborough on numerous occasions before and surprised and delighted my readers (or reader) with stories of the previous expeditions, so I won’t linger unnecessarily. 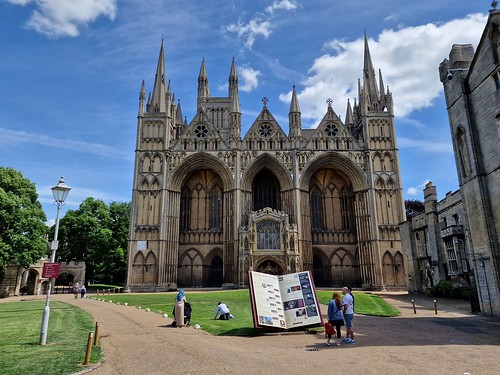 The frontage of Peterborough Cathedral, one of the more underrated religious buildings in the country. Incidentally, I was pleased during lock-down to be asked by the cathedral if they could some of my previous photos on their blog, always useful to know someone is reading something on here. 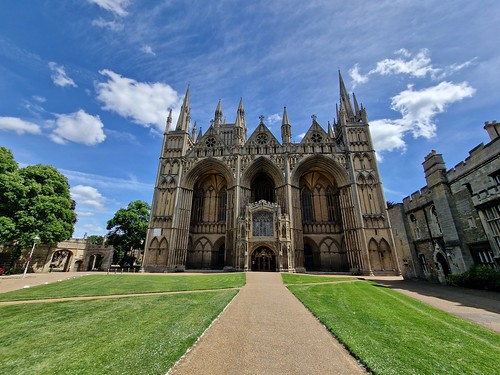 I didn’t go in again, but I’d recommend going in as it’s free of charge, and the guided tour is only £5 and that gives an extra depth to the history of the building. 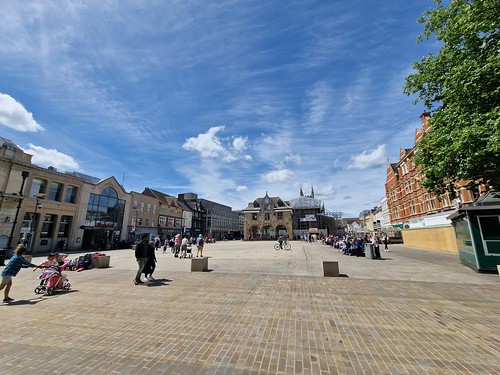 The main square in Peterborough, with the sun still shining. 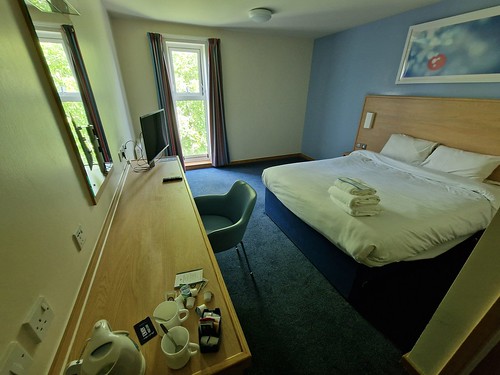 Back in the Travelodge at Peterborough and they kindly gave me a heap of milks and decaff coffees on request. Richard decided to come to Peterborough for the evening, reliving his nearly weekly trips to London last year to hear what gossip was going on about him, and we were both highly amused (admittedly one of us more than the other) when he found that in his room they hadn’t put any cups, coffees or teas, although they had remembered the kettle. 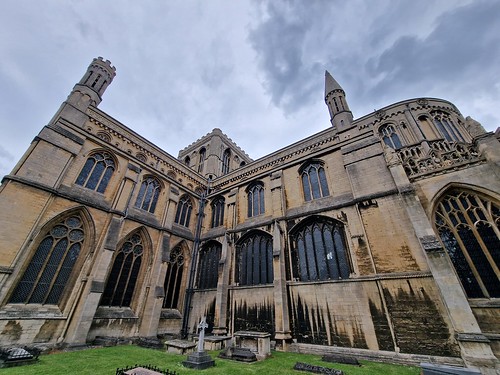 After Richard had arrived into Peterborough and had a good laugh about his room (and got replacement things at reception), we had a quick walk around the Cathedral. 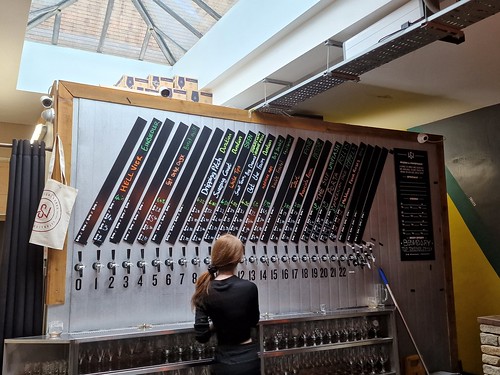 When I visited Peterborough before a couple of years ago, my favourite bar was Stoneworks. The service here was excellent again, but I don’t like entirely their way of displaying beers, it’s not easy to read like that, but they also don’t mention what type of beer each one is. The staff member did offer recommendations, but it’d be much better to display whether it’s a sour, porter, IPA, or whatever. 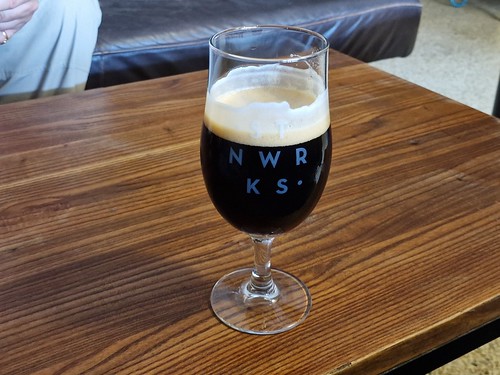 Trying to unpick their menu, and they really should be on Untappd, meant I ended up with the Sup from Whiplash, which was fine, but I’d had it before, and I suspect there were better options on the menu. No doubt Nathan would have been able to tell me what every beer was, since he seems to have stored most of Untappd in his memory. The bar has quite a rustic design to it and it’s also one of those places which feels ideal for a relaxed Sunday afternoon, so I still like Stoneworks and would recommend it. And I also like the effort they’ve made in having branded glasses. 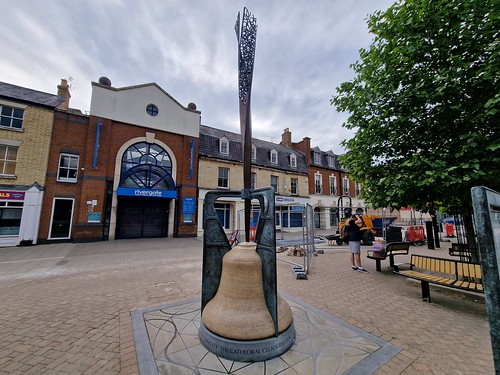 A perhaps slightly over-engineered sculpture which is meant to commemorate Henry Penn, a local man who cast bells in his foundry. There’s plenty more information about this man and his work at https://www.pennhenry.co.uk/. And I can’t really complain about this artwork, even though I just did, as it taught me something new and that can’t be a bad thing. By writing that, I more mean that artworks should educate or inspire in general, not be specifically designed to teach just me things. I have to clarify, as otherwise someone will email me. 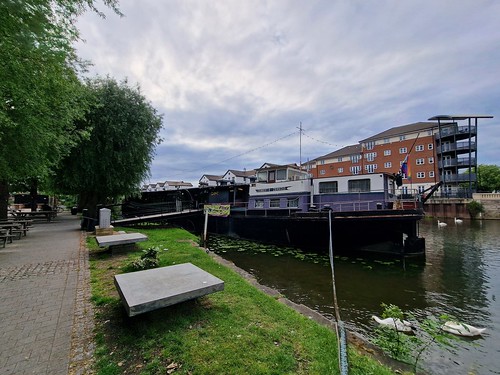 Next was a repeat visit for me to Charters, which has a bar and restaurant on different floors. 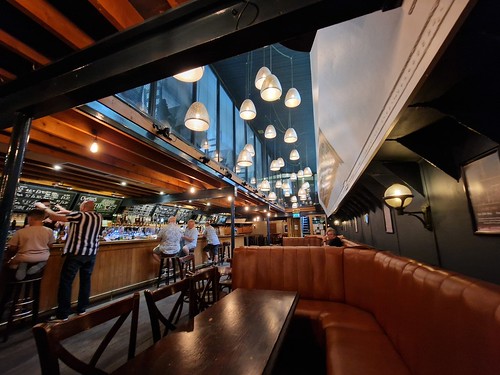 I’m pleased to say that Richard didn’t get seasick, although I think the boat is pretty rigidly placed in the water and doesn’t much move at all. 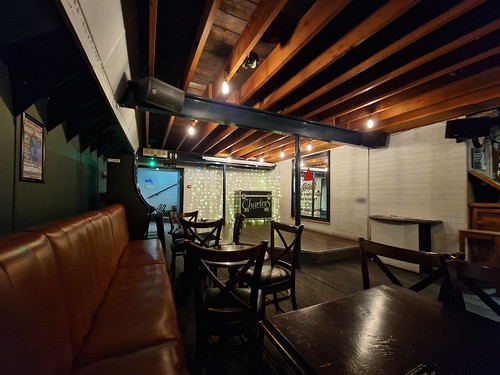 As a comment more about my phone camera, I’m pleased that it doesn’t blur the light around bulbs and the image quality is much cleaner than my previous phone. Technology is moving on quickly and it’s hard to see how phone cameras will be able to improve in the future, although I’m sure that they will. 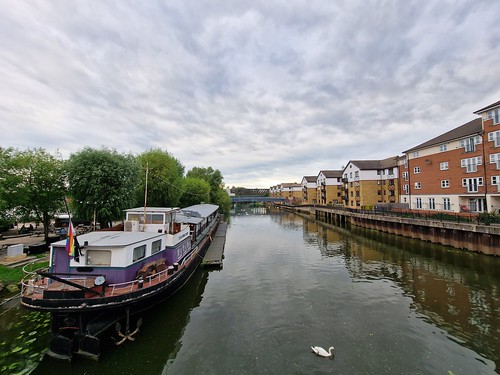 The boat sitting (I’m not very nautical, I don’t know the official term) happily in the River Nene. 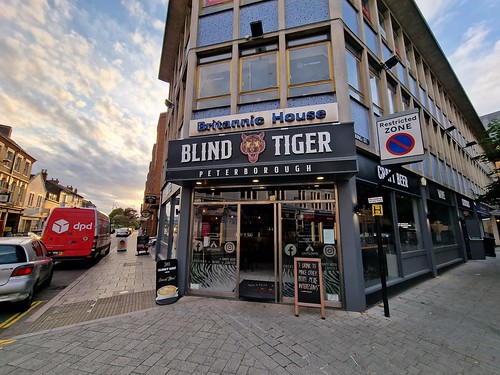 I made a mistake here as I was excited to see a bar in Peterborough where I hadn’t been and listed its beer on Untappd. We decided to spend some time here after popping into the Wetherspoons next door where I could choose what beers I wanted from their Untappd listings. To cut a long story short, we entered Blind Tiger and they then told us that they were closing so couldn’t serve us. In fairness, they closed at their advertised time of 20:00, I just hadn’t guessed that they’d shut so early on a Sunday, which is my fault, not theirs. I was disappointed, I was already expecting to write in some detail (it’s relatively rare to find any venue in provincial towns that list their beers on Untappd, and rarer to find their logo on the window) about the bar, but, it wasn’t to be. It also meant that I didn’t go anywhere new during the evening, but there we go, this was near to being a venue that I would have perhaps returned to on many occasions. 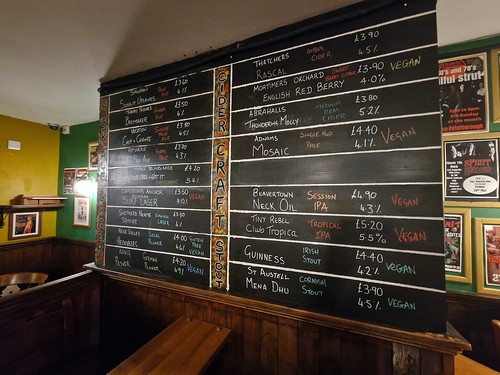 It was too early to go back, so we went to the Ostrich Inn pub where the service was friendly and attentive. I’m puzzled by the placement of this board, as I couldn’t read it when we got to the pub because people were seated in front of it. It’s a nicely laid out board when visible though. 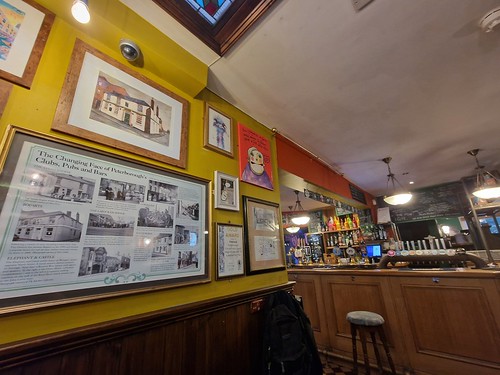 I won’t linger writing about the pub given I already have in the past, but I went for the Chop & Change from Vocation Brewery which was well kept. There’s an informal atmosphere to this pub and although its live music isn’t my thing, it’s clearly got a strong backing from the local community. Some interesting decor, history about the venue and a laid-back vibe, all rather lovely. 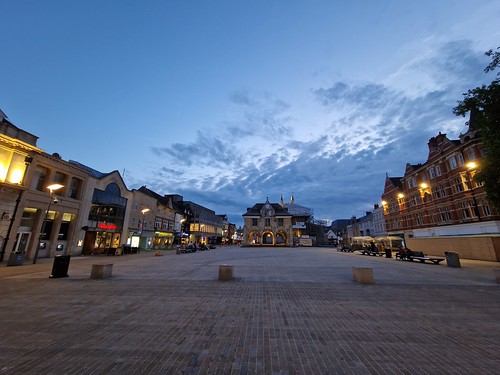 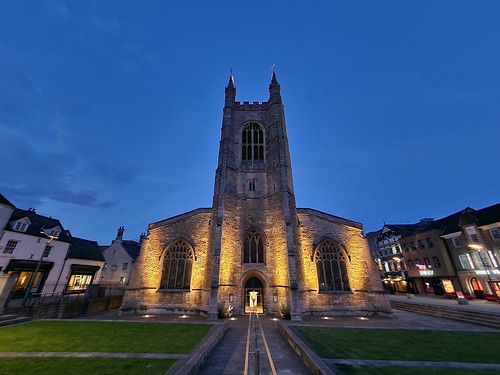 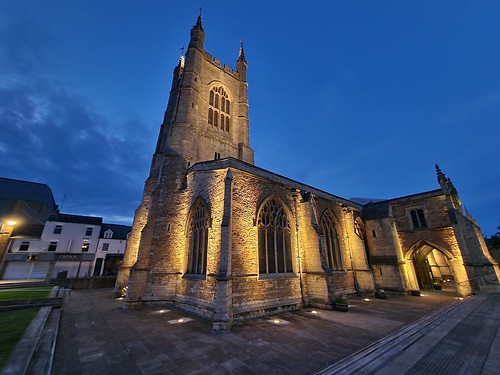 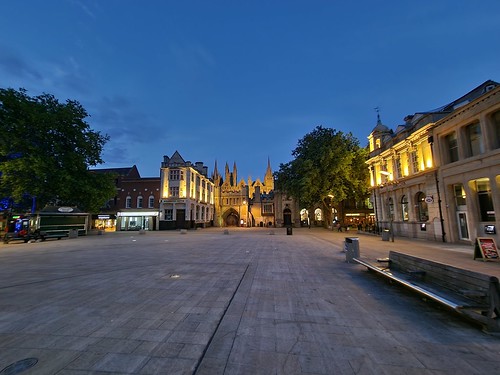 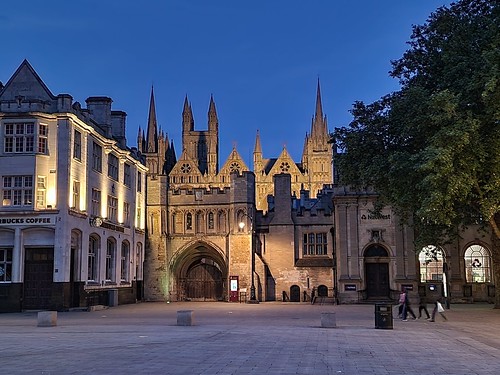 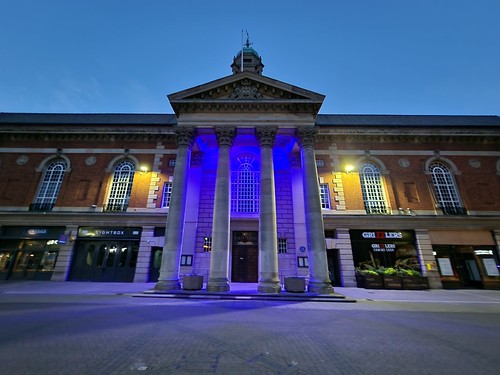 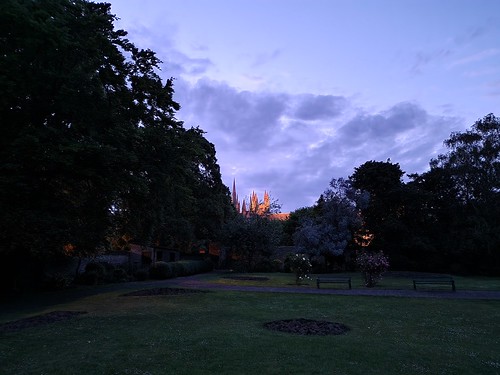 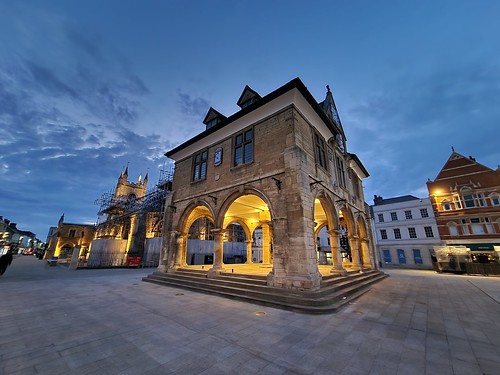 And photos of Peterborough whilst playing with my new phone, checking how they came out in the dark, and I thought the photos looked OK. Expect to see lots more photos in the near dark over the coming weeks until I get bored on testing the image quality. 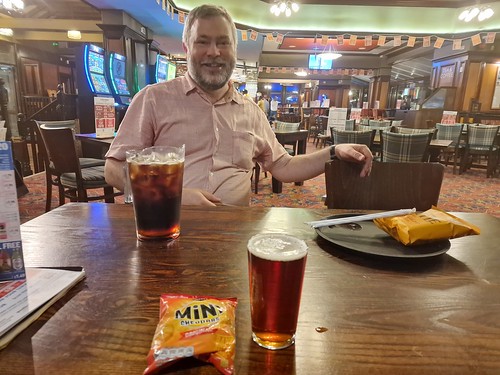 And a final drink of the night in the College Arms, a JD Wetherspoon pub, where I went for a well-kept Benchmark from Bedlam Brewery, alongside a rather delicious pack of Mini Cheddars. It shows how decadent Richard is, not only did he order a jug of cocktail, but he also then complained when he didn’t get a glass. I think many of their customers would have happily drunk their cocktail either directly from the jug or by using the straw, but Richard was having none of it.