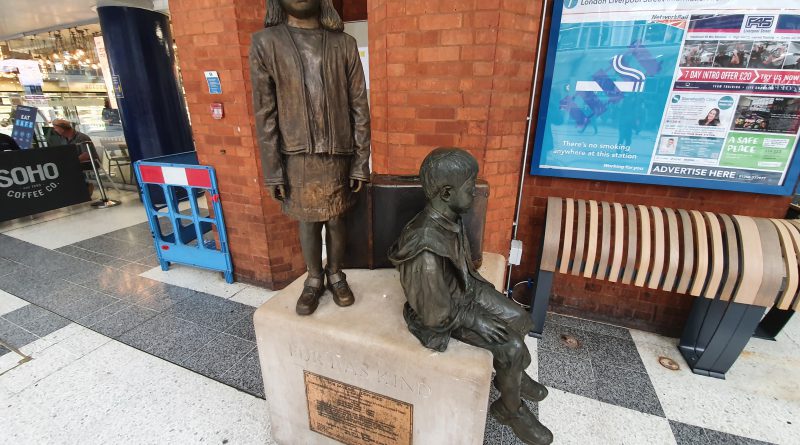 I’ve wanted to take a photo of this numerous times before, but there have always been people sitting either on the sculpture or perched on the seat like thing next to it. Since London is suffering from a lack of visitors and workers at the moment, the railway station is quiet and there were few people around at all. The sculpture is designed by Flor Kent and not by Frank Meisler as I had thought, although he designed the sculpture on the main concourse and the one in Gdansk. They commemorate the same thing though, the Kindertransport which saved thousands of Jewish children from death. Unfortunately, the transports were brought to a halt by the start of the Second World War, but the lives of 10,000 children were saved.

Originally this sculpture was placed on the main outside concourse of the railway station, but just the girl, which is a life size cast of one of the survivor’s grand-children. Along with the girl was a large perspex case of actual items that had been brought over by the children. Today, the figure of a child has been added and the case is no more, and they have been placed in the railway station as a reminder that this is where many children came on their rescue mission. I’m not sure that it’s best placed by the entrance to the underground station as it’s easily missed because of the people who often stand in front of it.

There are other similar sculptures across Europe which note other parts of the journey that children went on. It’s a very emotive piece and a reminder of what went on here.