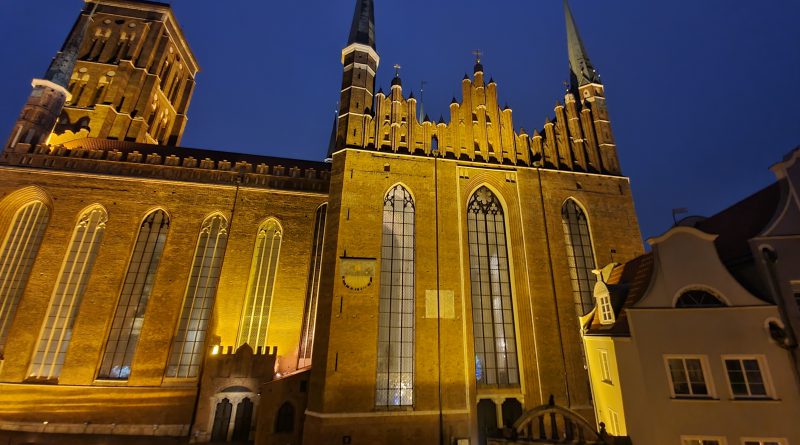 Leaving my usual IHG and Accor options for the night, I booked into the Hotel Artus in Gdansk city centre, opposite St. Mary’s Church. I noticed that the Genius Level 3 offer for this hotel gave a free room upgrade, so I thought I’d try that, especially given the low prices. Positive first impressions, I don’t think that brickwork is particularly old, but it adds some character to the room, as do the big windows. The sitting area of the room, all modern and contemporary. The light at the rear didn’t have a bulb in and the bathroom sink didn’t have a plug, but I didn’t let these factors concern me. And that was the view from the room, quite spectacular and a complete delight to look out onto. There was regular noise from the church bells and the usual sounds of a city, all of which I thought were charming and added character. The hotel has picked up some negative reviews about the noise from the church bells, which is ridiculous as far as I’m concerned, what’s the point in staying next to this historic building which is one of the largest brick built structures in Europe and complaining about the noise from it? Anyway, I thought it was all really rather lovely. The breakfast room in the attached cafe, my first impressions were positive. This serves as a cafe which is open to the public during the day and the surroundings are a well thought through mix of modern and traditional. The latte was dusted with cinnamon, this was a decent coffee. I was disappointed to discover that they’ve scrapped the buffet breakfast arrangement and are just serving plated breakfasts. I’m fairly sure that this is just because they’re quiet, but I don’t like penny pinching like that as they could just put a few items out and refresh as appropriate so that guests can have what they want. The rolls, peppers and salad elements here were nice, as was the yoghurt. What I assume is pork was bland and tasteless, and the cheese tasted of cardboard. I was initially pleased to see toast, but it was some sort of odd and inedible toastie. Annoyingly, there was no orange juice, jams or gherkins, which are my staple diet at Polish hotels, along with salamis and the like. I must admit to missing the breakfasts offered by IHG and Accor hotels, and these shouldn’t really be better than smaller hotels like the Artus, especially given it has its own cafe. The hot options were limited to sausages and scrambled eggs, which is a shame as a decent poached egg and toast is one of the nicest things. The sausages were poor quality and things like this are far better just placed on a buffet arrangement so that guests can choose if they want them or not, perhaps just trying a small amount. The onions were nice, although it’d be difficult to get that wrong. I felt quite guilty about how much of the food here had to be chucked in the bin, this is a wasteful arrangement from the hotel. I’m not convinced that their penny pinching actually saved them anything here either.

Anyway, this room was cheap, at £20, so absolutely nothing to complain about there, although the breakfast was extra. As room views go, this was one of the best that I’ve had and as a lover of city noise, the ambient sound of church bells and pedestrians worked nicely for me. It was a shame the hotel served some cheap items up for breakfast, otherwise this would have been a near perfect review. Breakfast aside, I liked the atmosphere in the hotel and there were no annoying noises either internally or externally. I’ll also remember that lovely room view for a long time, so I’m glad I stayed here.