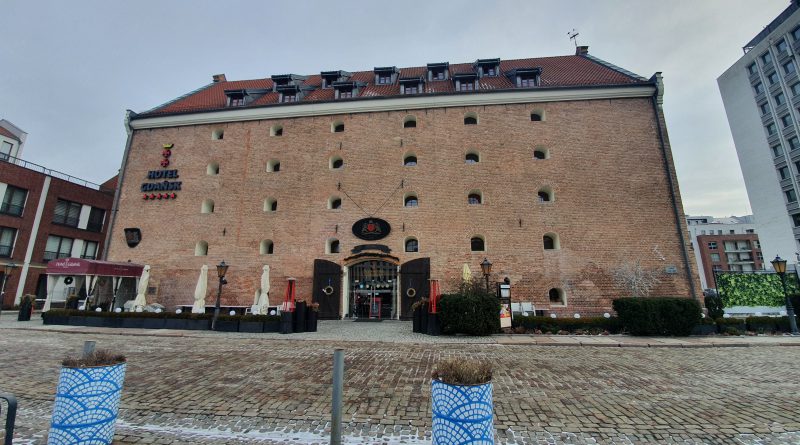 Before I start with this, I’ll mention that this series of posts is all a bit random (but random is good) and my only little aim is to generate locations in GeoGuessr that I walk to. There’s no point in this other than being a useful way to see different parts of the city that I wouldn’t otherwise think of going to, and it gives some structure to posts such as this.

The location randomly selected by GeoGuessr was ul. Mariana Seredyńskiego, 80-753, a short distance east from the city centre. I was staying at the Novotel (which is behind me in the above photo) which was the starting point. This is Brama Stągiewna, or the milk jar towers because of their shape. This was once part of the city’s fortifications, but they were badly damaged during the Siege of Gdansk in 1813 and then again in 1945 when they were set on fire and their roofs collapsed. The building was repaired in the post-war period and is now in private hands. Usually I’d go over to the bridge which is to the left of the Brama Stągiewna, but they’ve taken it down for reconstruction, so there’s this temporary metal structure a little further down the river. More about this temporary bridge in my second post, as it’s been constructed on older foundations. Once on the other side of the Motława River, there’s a better view of Brama Stągiewna. More on this later because another GeoGuessr location brought me back here, but this Granary Island which has been heavily developed over recent years. The number of cranes visible is testament to how much more construction is taking place here. I’ll see if I can find my photos of Gdansk when I first came here a few years ago, before any of this modernity was here, it was just the remains of the old buildings. The grand Hotel Gdansk which is located in a former granary building overlooking the river. The name is just slightly fiddly to find in search engines, as it just comes up with a random list of hotels in Gdansk, but it’s a prestigious name that apparently they had to get the permission of the City Council to use. One of the old cranes by the side of the river. S/Y Korsarz, a sailing ship built in Gdansk (or the Free City of Danzig at the time) STS Generał Zaruski, a sailing ship built in 1938 in Sweden and they had to remind the Poles in 1945 that they needed to pick it up as it was completed and paid for. It’s still in use and has now been acquired by the City of Gdansk. At the back of the photo is the iconic crane (zuraw) which was once one of the largest in the world. Badly damaged during the Second World War it was reconstructed and is now an interesting museum. The grand 5-star Hotel Podewils Old Town Gdańsk is in an eighteenth century building that was once next to the drawbridge to the Ołowianka Island. There’s an interesting history of the building at the hotel’s web-site at https://www.podewils.pl/en/hotel-podewils-in-gdansk/hotel/history. The 50-metre tall Amber Sky ferris wheel on Ołowianka Island is visible in the background. Without being rude to the residents of ul. Angielska Grobla, it was notable here that the modernity and grandness came to something of an end, with things suddenly feeling a little more derelict. I mention this street as it means the English Dike, or the Long Gardens, and this dates back to when King Henry IV visited the city, something he did twice. Traders came to the Hanseatic City and the authorities gave the English their own area, ostensibly for their own protection, but more likely as they kept getting drunk and upsetting the locals. This was separated by a river, which was then turned into a road and dike, and the name has lingered on. This looked like an interesting building, although it’s now mostly derelict. It’s on the land formerly occupied by the meat works and there’s a history of the structures at https://historia.trojmiasto.pl/Dawne-kino-Piast-Co-z-niego-zostalo-i-w-co-sie-zmieni-n134052.html. This whole area is gated off and there’s a large construction project expected to take place, which I assume will be primarily residential. This part of Gdansk is just two minutes walk from the central tourist area and I can imagine in a few years the whole area will have been entirely modernised and renovated. And just across the road from the derelict building in the previous photos, here we are. I didn’t spend much time trying to line up the GeoGuessr shot exactly, but it’s visibly in the same area.