As a minor confession, not that it much matters, but the coach in the photo above isn’t the one I got from Warsaw to Gdansk, it’s the one that was at the platform before. But, I didn’t get a photo in Warsaw of the actual bus, so it’ll have to do. The coach departed from Warsaw West Coach Station and it turned up on time, which was fortuitous since it was getting cold.

For anyone who ploughs through the rubbish that I write, I don’t really like Flixbus as they’re generally hopeless in some shape or form. However, things seem to have been improving, whether that’s because they are as a company, or because I’ve just become a little more fortunate.

Anyway, the bus turns up on time and it’s modern and clean. The coach driver didn’t burden himself with being polite or helpful, but perhaps he was concentrating on his drive ahead. It’s a relatively long journey, we set off at 13:30 and arrived in on schedule at 18:40 in Gdansk. The coach started at Warsaw West, but it went on a little further to Gdynia, with stops en route at Warsaw Młociny and Elblag (somewhere I keep meaning to go at some point).

The coach, quite amazingly, had working wi-fi and power, which isn’t usually the case. It also doesn’t have those horrible leather seats, but instead fabric seats which were clean and looked modern. I’m not an expert on coaches, but it seemed relatively new and well looked-after. The temperature on board was just right and there was a ten-minute break en route, with everything running according to the timetable. The driver made announcements in Polish, with a pre-recorded safety and welcome audio recording which was in English. This isn’t a great photo, but it’s of the actual coach after we arrived into Gdansk coach station, which is centrally located and just a few minutes walk away from my hotel.

For this journey, I don’t really have any complaints as it cost £5 and it got me safely and on time from Warsaw to Gdansk. It was an easy journey and if the driver had been a little less grumpy to customers, then this would have been my first perfect trip with Flixbus. What a time to be alive…. 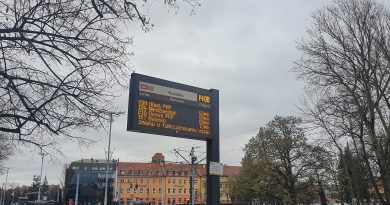 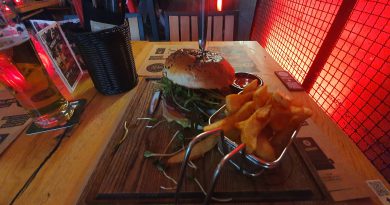 Gdansk – Whiskey in the Jar