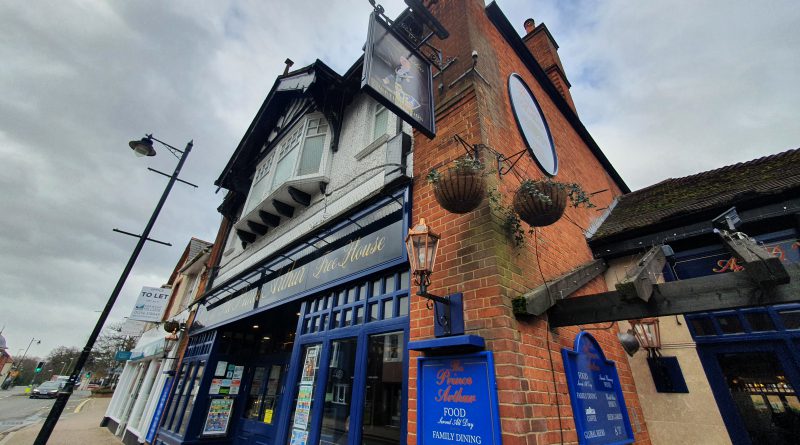 I’ve now completed all the Good Beer Guide listed pubs in Farnborough, although there are only three and one of those is effectively in a shed that the council has stopped the public from visiting. Going to Fleet for the day, there’s only Good Beer Guide pub listed there and it’s the JD Wetherspoon outlet, Prince Arthur.

I’ll use JD Wetherspoon’s history of the reason for the pub name:

“Fleet’s development as a town was due, in large measure, to the nearby army camp at Aldershot. In the 1890s, its commanding officer was Prince Arthur, third son of Queen Victoria. During his time in charge, Prince Arthur lived in Fleet. This was the first shop in Fleet with two entrances and had ‘a good turnover of groceries, including butter and tea’.”

There’s an odd thing about JD Wetherspoon pubs that you can, after several years of training by going in them so regularly, get the vibe almost as soon as entering. There are the glossy new pubs with shiny plugs, dimmer switches, every style of menu at the door, then there are the pubs that look as though they’re near to falling down, mostly the older ones in London that they’re straining to use every inch of space as they’re so busy. There are fabulous interiors in historic buildings and then pubs such as this, mostly from the turn of the century, when they were a little less decadent in the design amidst a wave of new openings. And these ones tend to have the best staff, they’ve almost moulded into the community in which they serve, the staff knew the customers and most of these are locals. These pubs are not flashy, but they’re reassuringly present and it’s noticeable that some of their most loyal older customers sit near to the entrance excited to see their friends come in. I like these pubs. That egg looks far from ideal and I’m not quite sure why they’re serving them over easy in some attempt to perhaps replicate dining in the United States, but fortunately, the yolk was still runny. I’m not saying that my morning would have been ruined if I couldn’t dip the toast in the egg, but I would have muttered quietly to myself (and would have probably sent the egg back as I’m annoying like that). All else was fine with the breakfast and for the money it was entirely fine, we’re looking at under £5 for unlimited coffee and a traditional breakfast. Half a pint of Illustrious from Irving & Co Brewers, a small brewery from Portsmouth. Quite a fruity pale ale, this one had a pleasant aftertaste, was well-kept and was priced at the ridiculously good value of £1. The staff here were friendly and personable, with more conversations between team members and customers than I’ve seen in a JD Wetherspoon outlet for quite some time, it had the feel of a community pub.

It’s a relatively large pub which stretches back some way, with numerous power points dotted around the place which is quite handy.  The online reviews of the pub are quite reasonable, although they’ve annoyed the usual selection of customers over the years, including the:

“Shoddy short shelf life beers which often run out due to them buying up leftover stocks. Poor quality, end of life produce.”

Which is a persistent lie that only recently seems to be dying out…..

I’m conscious that some people dislike JD Wetherspoon, but the quality of the service, the range of the products, the cleanliness of the venue and the value combines to form a reliably positive experience. This particular pub does need a refurbishment at some point as it’s getting a little tired, but it seems a very sensible addition to the Good Beer Guide to me.