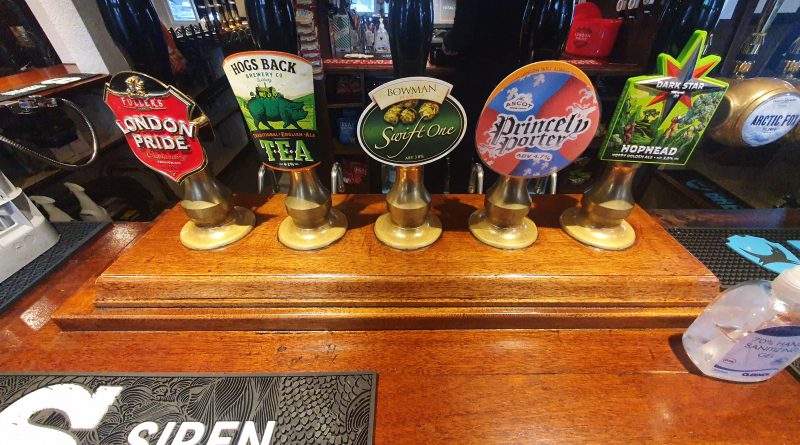 On my continued trek around pubs listed in the Good Beer Guide, the Prince of Wales is located around a fifteen minute walk from the centre of Farnborough, although is quite near to Farnborough North railway station. There’s a mixture of traditional and modern design in the pub, I think it all works well. The cask and keg options. There was a friendly welcome from the member of staff at the bar, with the surroundings being warm and peaceful. Some effort has been made with the bar snacks, I approve of this arrangement. The selection of real ales, a colourful and well presented bar. Interestingly, there are Siren Craft Brew and Brewdog bar mats, another touch of modernity. The Princely Porter from Ascot Brewing Company, a decent porter with a pleasant chocolate flavour, although I’m not sure that I got much of the dark berry fruits that the brewer mentioned. The Roast Ox crisps complemented it beautifully.

I can’t say that the situation with dogs here is ideal, although it’s not really for me to criticise as pubs at the moment can’t really afford to turn away custom (I more mean dog owners rather than dogs themselves). However, the dogs here were being unruly, jumping on tables and barking loudly and for a prolonged period. The environment soon switched from cosy and welcoming to a place which was considerably less appealing. There was a craft beer that I was going to have from Brew York, but I decided to leave it as the environment lost its excitement for me.

There were no particular problems with the pub, as the staff members were polite, the surroundings were clean and comfortable with the beer range being really quite decent for a pub on the edge of a town. They’re not currently serving food, but I’m not sure it would be ideal for customers trying to eat a Sunday roast whilst navigating around the dogs. It’s also well reviewed on-line, so they’re clearly consistently pleasing customers. They do seem to have abandoned their social media accounts though, leaving Twitter untouched and deleting Facebook, and they’re not responding to reviews, so it’s difficult to get an understanding of what is going on here in terms of events and menus.

The pub is though not just in the Good Beer Guide, but it has been in for over forty years, it has won numerous local awards and their offering craft beer is a really positive development for such a pub with long cask traditions. Dogs aside, this is a very decent pub and I’m sure that it’ll remain in the Good Beer Guide for some time to come. 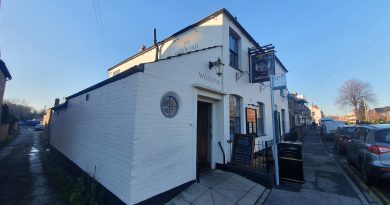