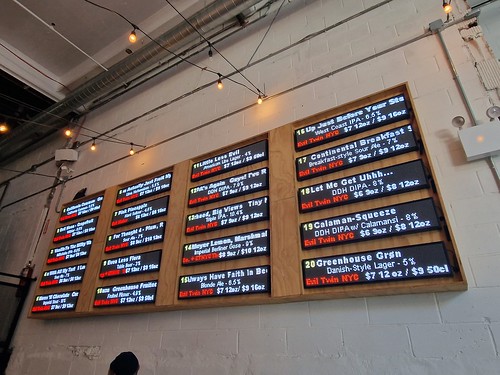 Next on the brewery list for me to visit was Evil Twin Brewing in Brooklyn, which has Danish origins that I didn’t know about (although I can imagine my friend Nathan knew that and will tut that I didn’t because I’m sure he’s told me before that the other twin founded Mikkeller and they don’t get on). Fortunately they also served in smaller sizes that are shown on this board, which meant that I was able to try six different beers. It also makes number 20, the Danish-style lager, feel more in keeping with the brewery’s heritage than I had realised at the time. 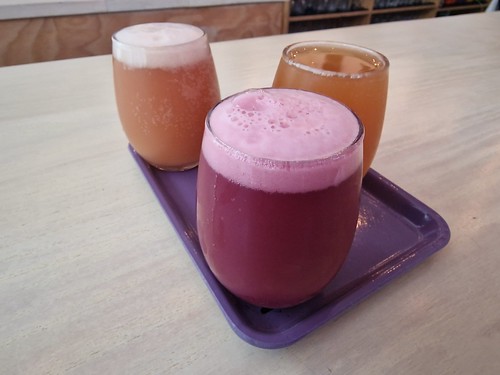 The first three beers that I went for and look at those beautiful colours. The one in the front is ‘I Love You With All My Tart’,a fruit sour with rich tastes of blueberries and strawberries. There are apparently graham crackers in there as well, but that passed me right by. The one on the right is ‘Continental Breakfast Sour – Peaches ‘N Cream’ which was one of the best fruit sours that I’ve had, so smooth and hiding its 7% ABV, it was effectively a peach fruit smoothie with some syrupy tastes as well to add to the whole arrangement. The other beer is ‘Fruit For Thought – Plum, Red Currant, Apricot and Dark Sweet Cherry’ although I was mostly getting plum. Perhaps a little too sweet, but still delicious, just not quite as decadent as I had hoped. 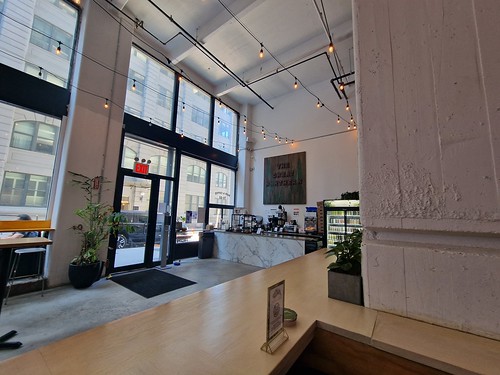 There’s a separate coffee shop bar set-up in the corner which opens in the morning, with the central bar then taking over from lunchtime. The service in the bar was pro-active and friendly, with the staff immensely knowledgeable about the beers. It was all laid-back and there were plenty of power points around which I only noticed as I was leaving. I was a little transfixed with the beers to have noticed them earlier on, that’s the excuse that I’m going with. 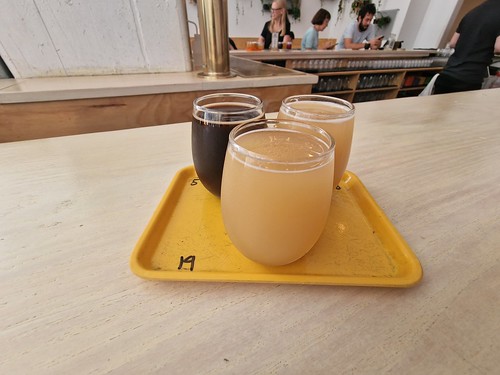 And then the next three and I liked that they had written the beer numbers on the tray so that I didn’t get muddled up. It’s the one at the rear left that I want to particularly mention, the ‘Cookies ‘N Cream ‘N Smores and ‘N Chocolate‘ which was also my 2,000th check-in on Untappd (woooo!! and here’s my Untappd link). And, let’s be honest, stouts don’t come much better than this. 10% ABV but not feeling like it, all of the ingredients in the beer’s name were evident by taste and this was very much packed with complementing flavours. For anyone scared of flavour in their beer, then avoid this. I had to sip at this as it was so rich, but it had as much depth of flavour as any food dessert that I’ve had. This one really was pure decadence, although perhaps a bit sweet for a lot of tastes, but I do like my imperial stouts.

As for the venue, I’d entirely recommend it, there’s a choice of sitting at the bar which I did, or sitting at the tables, although I can imagine that this must get full relatively quickly as it’s not that large. I’ll leave this post by linking to some brilliant advertising that Evil Twin did a couple of years ago.