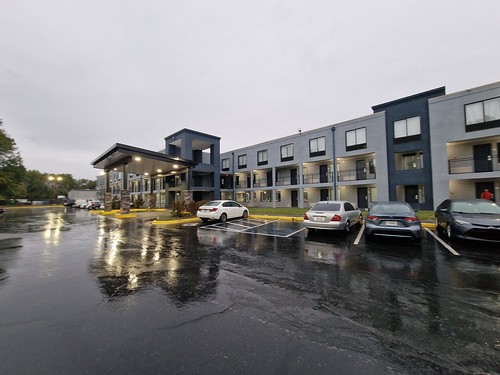 I’ve already posted about my experiences at the Baymont, a hotel I left during heavy rain feeling content about my stay, unlike apparently everyone else. 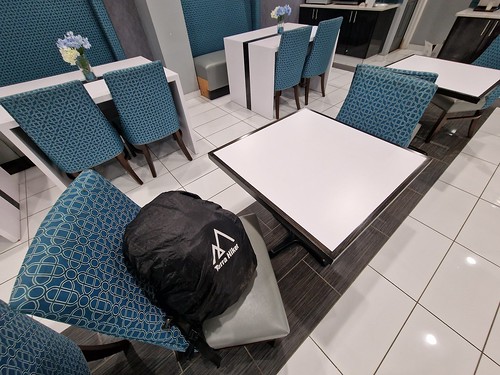 I had tried to minimise what I carried during my time traipsing around the United States for a month, but I did have a waterproof coat and a bag cover, so I was as prepared for rain as I possibly could be. Here’s my bag, ready for whatever weather was thrown at it.

Although I had no complaints about the hotel, I did have a complaint about the road system in Charlotte. Or, at least, the crossing the road system in Charlotte. My planned route into Charlotte had to be abandoned as I couldn’t cross the road. This isn’t ideal, but there were no pedestrian crossings and I wasn’t going to run across a road with such poor visibility in the rain. 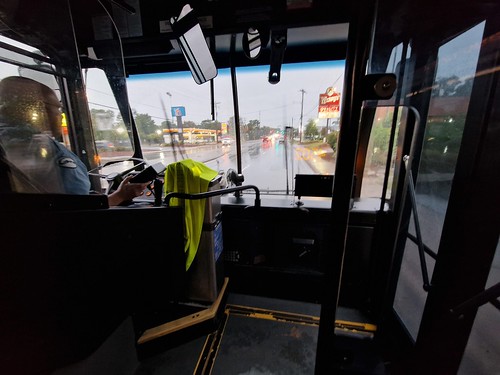 Instead, I decided to replicate the journey that I had made the previous day and was fortunate to catch the bus just as I arrived at the stop. It was clear that the day was going to be a good one. 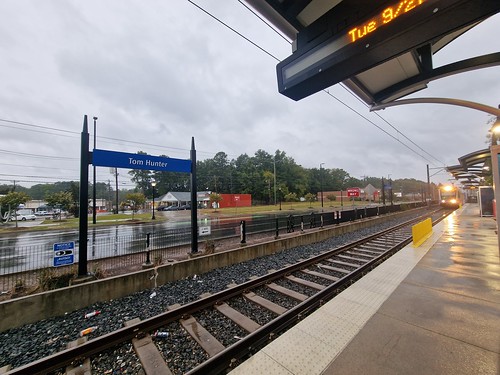 To my great annoyance, I was busy messaging on my phone (I’ve looked back and discovered the culprit was Nathan, although it seems hard to blame him for my not paying attention) and missed the bloody tram stop and so had to traipse about 200 metres back down the road. However, I remained positive despite missing the tram by thirty seconds and then having to wait twenty minutes as the next tram was delayed. 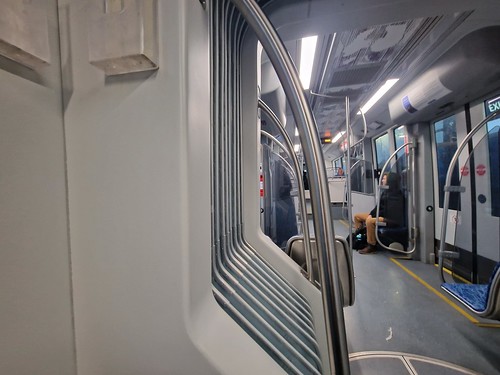 Slightly soggy, but safely on the tram and heading towards the centre of Charlotte. I decided at this point that I wouldn’t spent the morning exploring Charlotte as I had intended, the rain was torrential and I thought it would be sensible to get to the airport. This was the tailend of Hurricane Ian and although it was nowhere near as bad as it had been in Florida and South Carolina, there didn’t seem any point in staying out in the rain and wind. 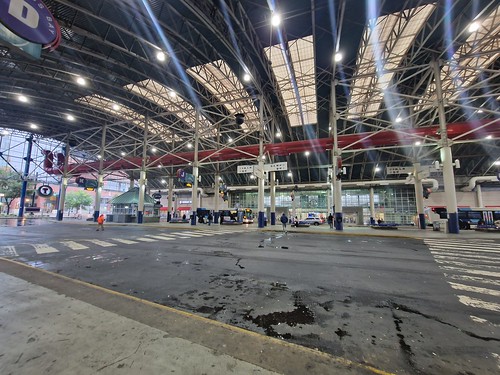 There are moments when travelling can be frustrating. I urge anyone reading (both of you) to zoom in on this photo of the bus station. I needed to get a bus to the airport from Bay V. Yes, the one stop not listed anywhere. 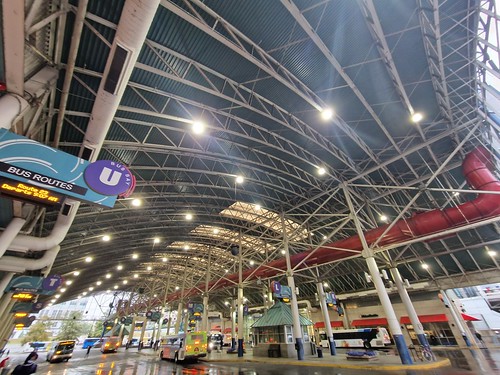 I went and asked a bus driver and he politely told me that the stop I wanted was outside. Outside in the rain. Great. 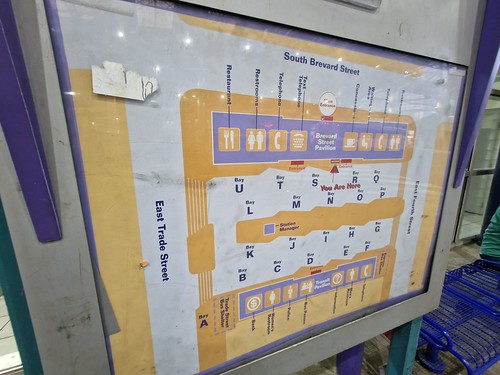 I don’t want to go on about it, but can anyone spot Bay V here? 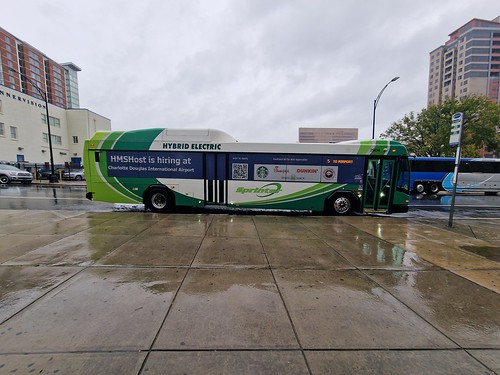 I stood at the outside bus bay trying to avoid the hurricane and whilst waiting I purchased my ticket using the bus company’s app. I was highly annoyed to discover that I had likely bought the wrong ticket, as there’s a small extra charge for airport routes and I hadn’t realised that before committing to my purchase. I decided to act stupid and show my incorrect ticket to the driver and hope that he thought British visitors were likely thick. But, being British, I worried about my possibly incorrect ticket for ten minutes whilst waiting for the bus to arrive. 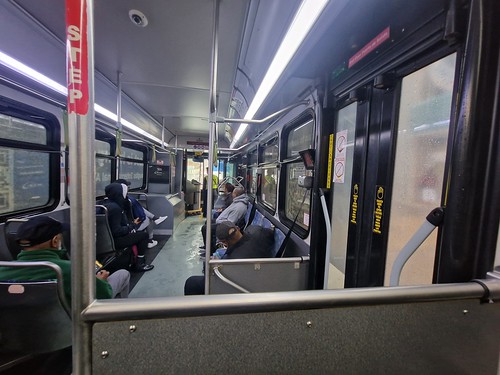 The driver didn’t bother with tickets, he said loudly “it’s too wet to check” so I got away with probably having the wrong ticket. I was delighted to get going on my journey to the airport and then five seconds later the bus broke down. The driver told everyone to get off and we all traipsed down the bus to disembark, whilst one woman pushed her way through the emergency exit. At that point a mechanic got on and fixed the bus within fifteen seconds, commenting slightly negatively to the bus driver about his incompetence. I was highly amused at the woman who had pushed her way out now looking quite angry at why no-one else had also disembarked, but that’s just my sense of order kicking in. 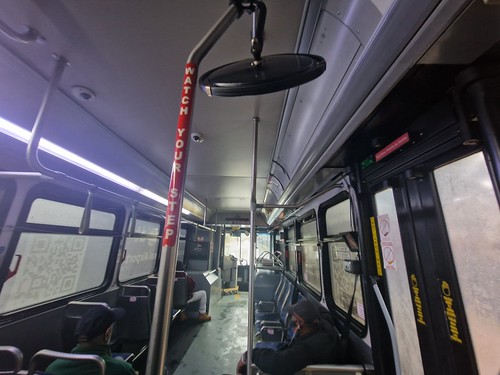 I had expected the route to be busy with people going to the airport. It transpired that I was the only person. I mention this as it really isn’t ideal to be sitting on a bus where it’s difficult to see out because of a hurricane and wondering why no-one on the airport bus is going to the airport. But I’m a fearless traveller (terms and conditions apply….) and so I bravely sat there getting slightly stressed. I never said travel was easy. But, I digress, I was safely at the airport which was being hit by a hurricane, so all seemed well with the world.