I’m relying on a public domain image for this post as I didn’t realise how historic this building was when I visited the museum which is located on the ground floor of the Briggs Hardware Building. The backdrop to this is that Raleigh was a planned city, one of the few state capitals that was, and it didn’t really start getting developed until the early nineteenth century. This building is later, constructed in 1874 and it was the city’s first skyscraper and remained the tallest structure in the area for over three decades. Today it rather blends into the streetscape, although it has a sense of architectural beauty to it. 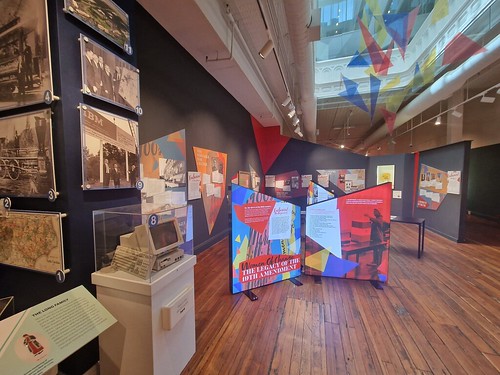 This is the ground floor of the building today, the home of the marvellous City of Raleigh Museum. The reason I mention all this is that it seems to me to be a pivotal moment of the history of the United States, when new cities were being laid out and expanding fast as migrants moved to the country from around the world. Of course, this was a difficult time because of the American Civil War, but there must have been a sense of wonder as this structure was constructed. There’s a story that the whole construction was paid for by gold and silver coins that had been buried by Briggs at the beginning of the war, although that’s now a rumour that is unlikely to be proved.

It was built for Thomas H. Briggs to house his hardware store and they used it for this purpose until 1995, when after a period of not being used it started its new life as a museum. There’s a skylight running through the centre of the building which ensures it’s well lit throughout, necessary given that there was no electricity when it was constructed. The building is the only remaining one in Raleigh from the nineteenth century that still exists in something like its original form, a survivor of the city’s early days when excitement for the future must have been running high.