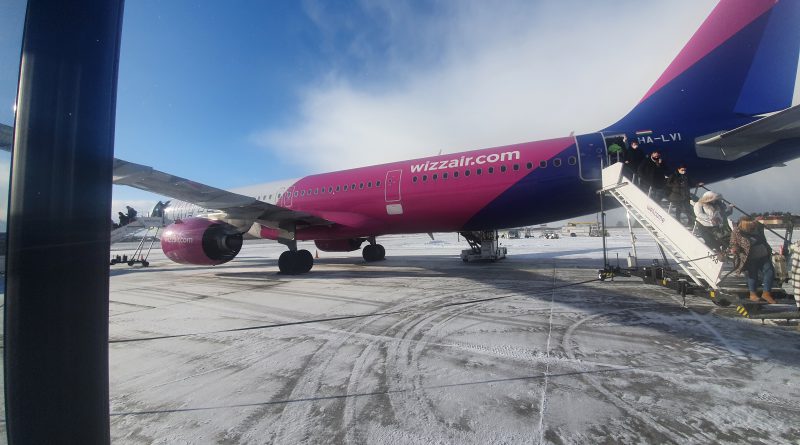 This is the delights of Luton airport at 05:45 this morning, after the ten minute walk from the nearby Holiday Inn. There’s the Wizz Air flight to Gdansk, with boarding information at 07:35. I didn’t fly with British Airways on this occasion as they have currently dropped the later flight to Warsaw and they’re dropped Krakow entirely. The Wizz Air flight cost a ridiculous £7.50 each way, which was another handy factor in this little arrangement. The boarding information didn’t ultimately come until 07:50. Incidentally, the security process at the airport was efficient and I was airside within five minutes of entering the terminal building. The boarding process was chaotic and ill-tempered, although I just let them get on with it. The boarding gate is on the lower level and so there is a flight of stairs between the corridor upstairs and the boarding gate, with customers waiting to join the queue. What is poor is that there are very few screens or boards to show customers that they’re in the right location as they’re going to their gate, this is in my view shoddy from Luton Airport, which feels a mismanaged set-up in general, as there were numerous confused customers about the place. I’m reminded just how well Heathrow T5 manage this.

The set-up here is that there’s a short priority queue and so the staff member called up to ask non-priority (people like me…..) customers to come down as there was a separate waiting area. A woman rushed down the steps, barged me out of the way and announced loudly “I’m priority, let me though” to the staff member. The staff member rolled her eyes and said “I called non-priority, I was very clear” which led to lots of muttering from the annoyed customer. There’s no real reason to need to rush to board, there’s plenty of space for bags and seats are already allocated.

There was an element of just bad planning here though, as we were in the holding area between the aircraft and the passports being checked for around thirty minutes. I found a seat and read a book on my phone, but there were no seats in the priority area, so those customers were all stuck standing up. It just felt muddled and there were three arguments between staff and customers over bags. I do like the drama to a degree, but some customers were getting quite het up. Oddly, the only customers getting het up seemed to be British, even though the vast majority of the customer on the aircraft seemed to be Polish. We were finally allowed out to the aircraft, around twenty minutes later than scheduled. The aircraft is HA-LVI, a nearly new Airbus A321 Neo which has been used by Wizz Air since June 2020. The aircraft had a busy day, it came from Warsaw this morning, then went to Trondheim and back after it arrived in Gdansk. It’s off to Oslo tomorrow and I’m sure it’ll have a lovely time there. The flight was absolutely fine. I hadn’t paid to reserve a seat and I was automatically given a window seat, but there was no-one in the middle seat as the aircraft was only about 60% occupied. The announcements from the pilots and cabin crew were polite, but broadly inaudible and the safety announcement was given way too fast to be of any use. However, the cabin crew were friendly and their service was efficient and unobtrusive, with the flight being perfectly relaxed and comfortable. I had forgotten that it was winter in Poland, so this snow and ice everywhere was a slight surprise. The disembarkation process was a little sluggish, with everyone taken to the main terminal by coach. I was in no rush and lingered about, which meant that I was one of the last people to get on the coach. So many people rush about and I can’t be doing with all that stress. By chance, it also meant that as I was the last to board, I was the first off the coach and I was the first person to leave the security area which was handy.

The member of security staff at border control was helpful, although he didn’t want to see my negative test I got yesterday, but he did check my Covid pass and my locator form. Although I could have got away without paying £32 yesterday for an LFT at Luton Airport, there are two reasons that I’m glad I got it. Firstly, I would have worried all day if I didn’t have it, and secondly, it’s just best to do things properly rather than risk being fined or deported. And Gdansk airport terminal, safe and sound. I have to say that this was ridiculously good value for £7.50 and Wizz Air felt a safe and secure airline to travel with, with the cabin crew being friendly and the aircraft being clean. The boarding process was unnecessarily stressful for many customers, but I was quite happy with my window seat and bag near to me, all perfectly comfortable. I will no doubt travel with Wizz Air more this year, not least because of their range of destinations, but also because their flights are so often reasonably priced.