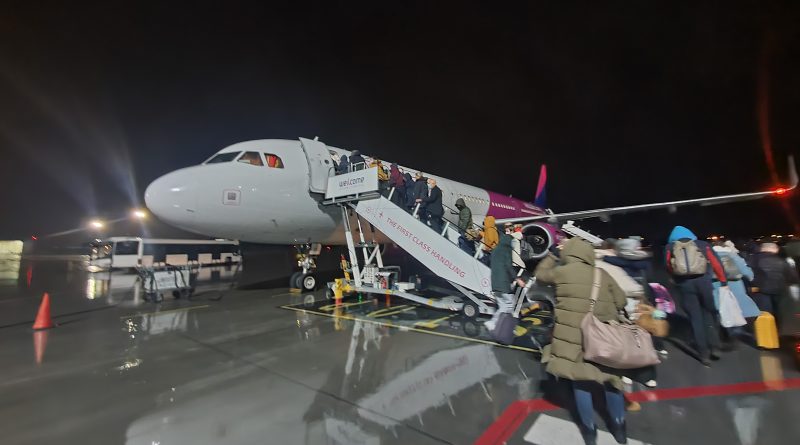 And it was time to come back to the UK, departing from Lech Wałęsa airport in Gdansk. As an aside, it must feel odd for Lech Wałęsa when he uses this airport to know that the entire place is named after him. I’m always slightly saddened to leave Poland, but I’ll be back in a few weeks and so can look forwards to that. Usually I’d just download my boarding pass on my phone and go straight through security, but Wizz Air don’t have any on-line processes in place to check the documents of travellers, so everyone is directed to the check-in desks first. It’s positive that they’re checking the UK’s Locator Form, although to be fair they’re legally obliged to, but a shame they don’t have a set-up similar to that BA have with VeriFLY.

I tried to get through a little earlier, but the friendly member of staff at check-in said they would only open the boarding desk for my flight two hours before the flight departed. She also helpfully mentioned that my mask wouldn’t be accepted by Wizz Air on any of their flights, although I did silently think it had been accepted on the Wizz Air flight out to Gdansk. But, I wasn’t sure on their policy and had a spare mask, so that was all fine. I was told to check the boarding screens around 150 minutes before the flight, which transpired to be useful advice, as that’s when the check-in desk for my flight opened. I was fortunate to be nearly at the front of the queue, as it snaked back to the entrance to the terminal within a few minutes. The member of check-in staff quickly checked that I had a passenger locator form confirmation and then my boarding pass was printed, which is a free service when customers can’t check-in on-line. Safely through security (where I was praised by the security staff for my efficiency, which I lapped up willingly) and into the lounge (more on which in another post) it was time to trek to the corner of the airport and Gate 1, located in the non-Schengen zone. There was a queue, but there’s always a queue with Wizz Air….. This process is the same with Wizz Air and Ryanair, they call passengers forwards to wait before the aircraft is ready for boarding. Which means a wait on the steps down to the tarmac, which is fine for me leaning against a wall reading a book on my phone, but less so for those who don’t feel quite as comfortable standing on steps for twenty minutes. And it started to rain quite heavily, but it was only a short walk to the aircraft. Wizz Air rarely use airbridges, which has the advantage of meaning that I can take photos of the aircraft. The aircraft was registration HA-LXS, an Airbus A321, which has been in the Wizz Air fleet since June 2017. I boarded via the back of the aircraft and the flight was clearly busy, and I think just about full. I had the middle seat, which is the first time I’ve had this in years, although the other passengers on each side were ideally behave which makes things easier. The leg room on Wizz Air really isn’t ideal, but the flight was only for two hours and so is bearable. The crew were friendly and helpful, although I couldn’t work out where they were from as their ability so speak so many different languages is really quite impressive. The pilot announcements were hard to hear, but we landed on time although the wind made the landing quite bumpy. Well, very bumpy actually, but it added to the excitement, although the babies on board decided at this moment that they really didn’t like what was happening.

It’s also fair to add here that this flight cost me £7.50, so it’s hard to fault Wizz Air for anything given that. The service ran as expected, the aircraft was clean, the flight was on time and everything was as comfortable as could be expected. The arriving into Luton Airport on time was fortunate as my friend Liam was there to pick me up, so he didn’t have to wait for endless amounts of time in an industrial park in Luton. Anyway, based on this flight I’d happily fly with Wizz Air again, they fly to a wide number of destinations that I want to visit and although I can’t claim the flight was luxurious, it’d be ridiculous to complain at the price that they charged.