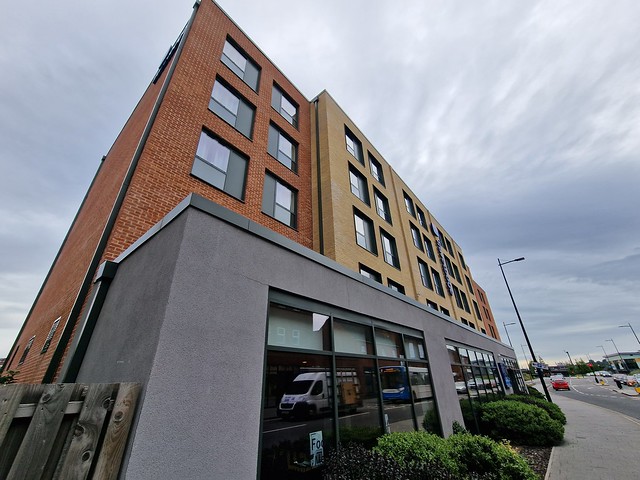 I wasn’t overly sad to wave goodbye to the Travelodge in Lincoln, although I’d add that I rarely actually physically wave to a hotel as I don’t want people thinking that I’m a bit odd. Being someone that clearly doesn’t have enough to be properly annoyed about, I focus on wanting to say negative things about hotels that refuse to have windows that will open. But, there’s more to worry about in life I accept. 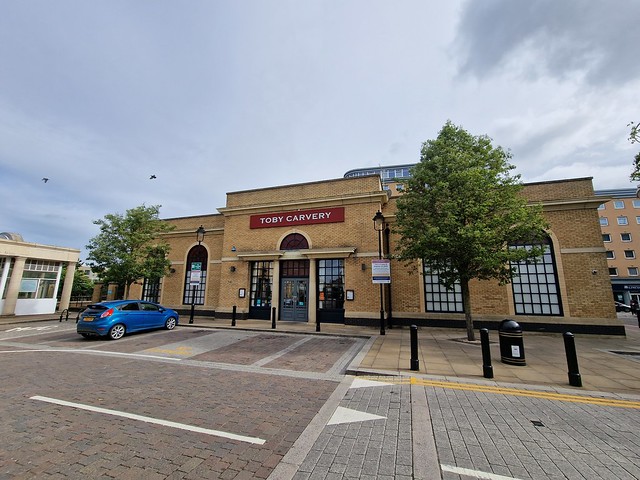 The breakfast at Travelodge was just under £10 per day and I’m not made of money, so I decided to come to the Toby Carvery where it’s all you can eat for £5.49. 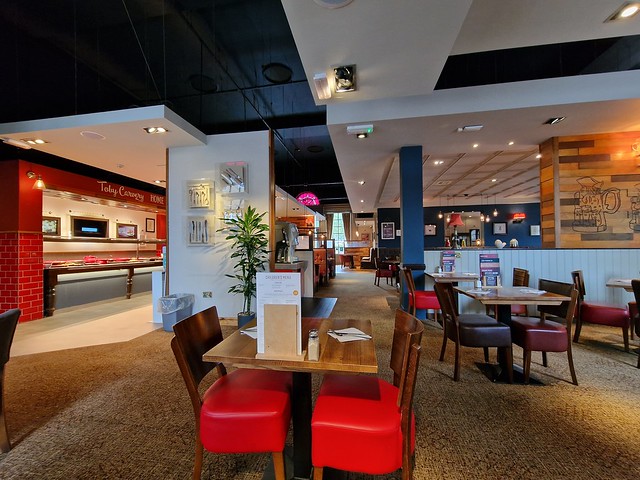 There was a friendly welcome from the staff member, but I can’t say that it was particularly busy, perhaps five or six other customers in the entire restaurant. But if you’re going to an all you can eat buffet, the fewer people the better, as it means uninterrupted food grazing. 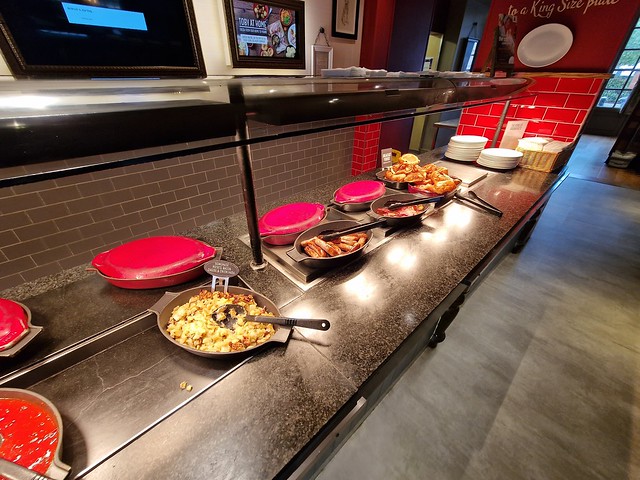 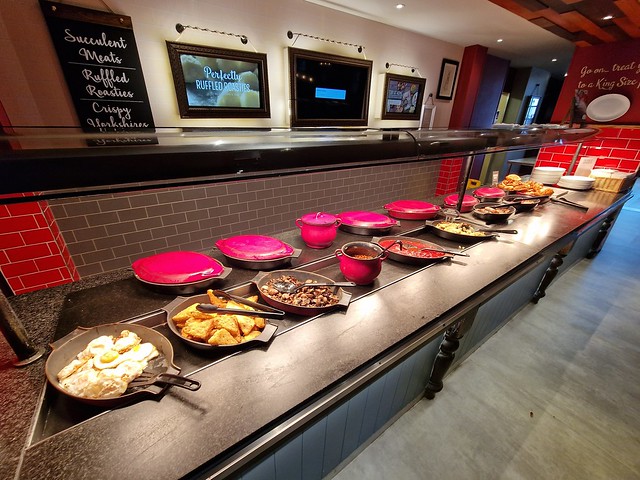 Alongside fried eggs, mushrooms, beans and plum tomatoes. I really can’t complain at just over £5 and customers can go back as much as they like. Which I did, on numerous occasions as I’m quite greedy. 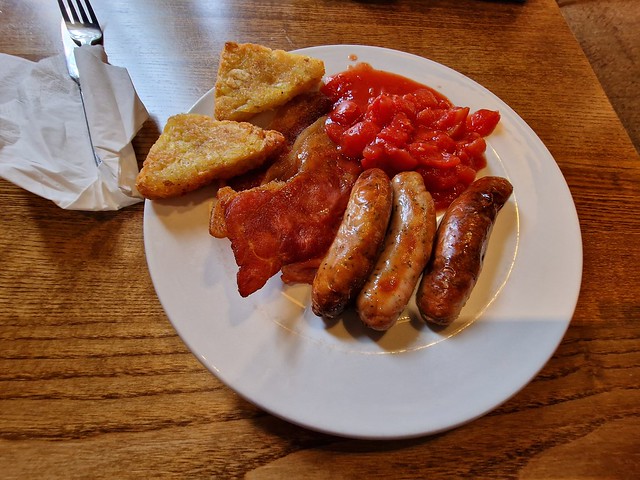 I’ll just link to one photo of food, as more than that is clearly excessive and arguably one photo is too much. The ingredients all tasted of a decent quality and I very much like restaurants which offer plum tomatoes as part of their breakfast offering. I also used the toaster here, which I’m normally scared of for fear of setting fire to the restaurant. Often these spit out bread which is still as raw as when it went in, but put it in again and it comes out blackened and smoking. The toaster arrangement here worked perfectly I’m pleased to report. 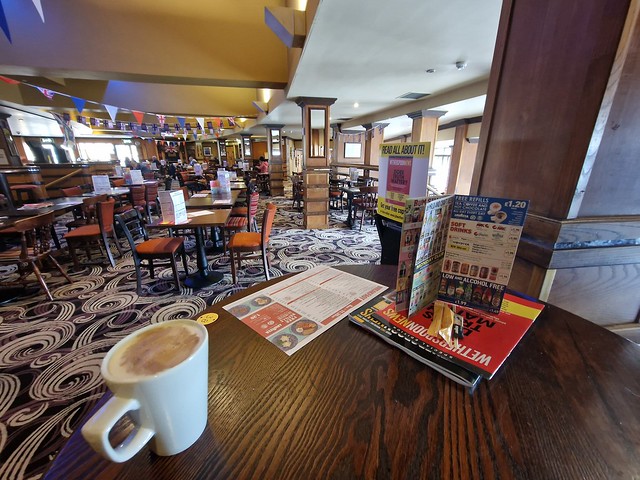 The only problem with the Toby Carvery set-up was that I was too thrifty to spend £3 on the unlimited coffee option, although that was partly because I prefer decaff and they didn’t seem to have that. That meant after an hour of over-dosing myself on salt from the bacon I had to rush to the JD Wetherspoon nearby to get about ten decaff coffees for £1.20. Bargain. 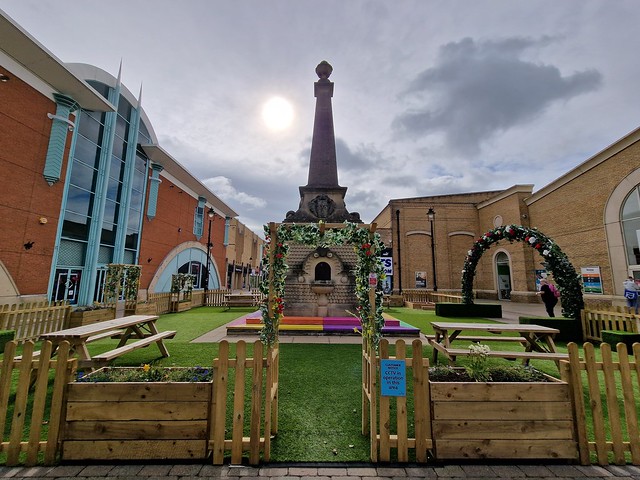 The former site of St. Mark’s railway station in Lincoln. As I mentioned in a post a couple of days ago, this railway station was demolished in the 1980s as it was really surplus to requirements. It dates back to when the railways were constructed, which was by rival companies rather than having an integrated transport plan in mind. This is St. Mark’s Obelisk which was originally built between 1762 and 1763 and was on High Bridge, being designed to be a water conduit. It was placed in storage before the Second World War, but was integrated into this shopping centre in the 1990s when the shopping centre was being constructed.

This map (clicking on the image makes it a little bigger) from around 100 years ago shows just how ridiculous the situation was and it’s surprising that the set-up lasted for so long. Two railway stations within a two-minute walk, which kept blocking road and pedestrian traffic trying to go down the city’s main road. I rarely say that removing a railway station is a sensible idea, but in this case, it was. 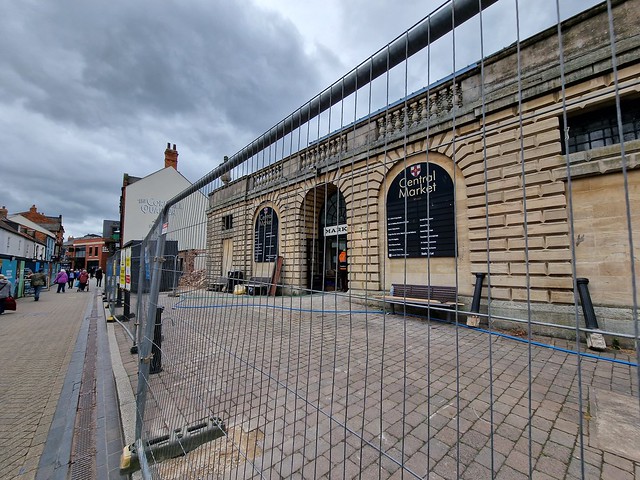 Central Market had lost its way a little over recent years and a decline in footfall has led to a decision to remodel and modernise the building. For anyone interested, there’s more information about that at https://www.lincoln.gov.uk/news/article/202/works-to-refurbish-lincoln-central-market-begin. 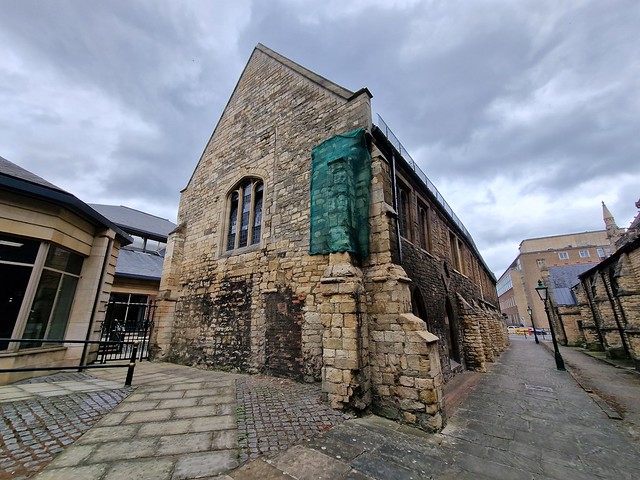 This is the Greyfriars building, or specifically the former infirmary of the Franciscan monastery. Most of the monastery buildings were taken down after the Dissolution of the Monasteries, but this one survived and was later used for numerous purposes, including a school and a Mechanics’ Institute. The building is now owned by the council who were using it as a museum, but for reasons unknown, they’ve decided to almost abandon this historic structure and stop people visiting it. There are though finally plans to reverse that decision and some of these ideas seem very exciting and interesting, with more information at https://www.heritagelincolnshire.org/projects/greyfriars-in-lincoln. 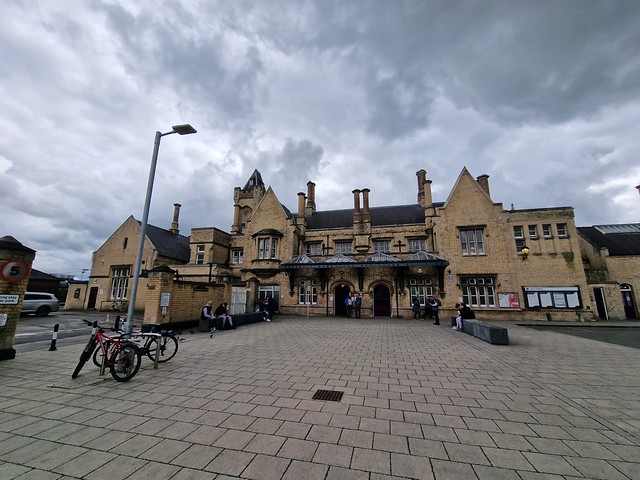 Back at Lincoln railway station for a cheap train to Norwich, changing at Peterborough. 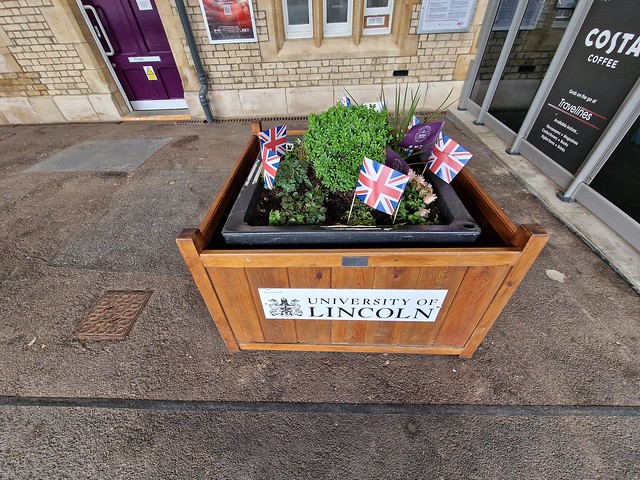 Every time I see signs for the University of Lincoln I think of the Inbetweeners. 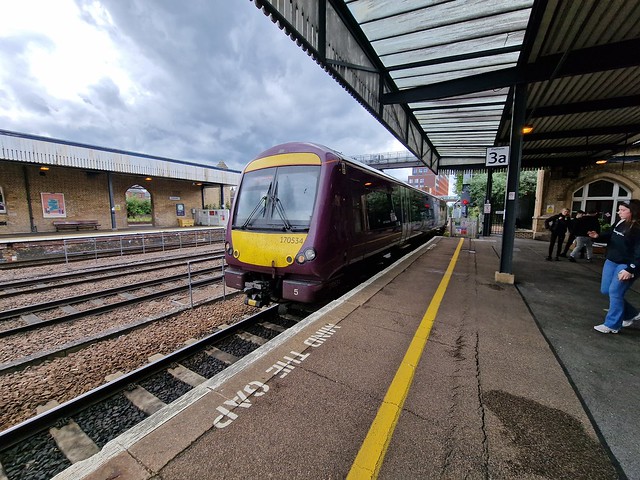 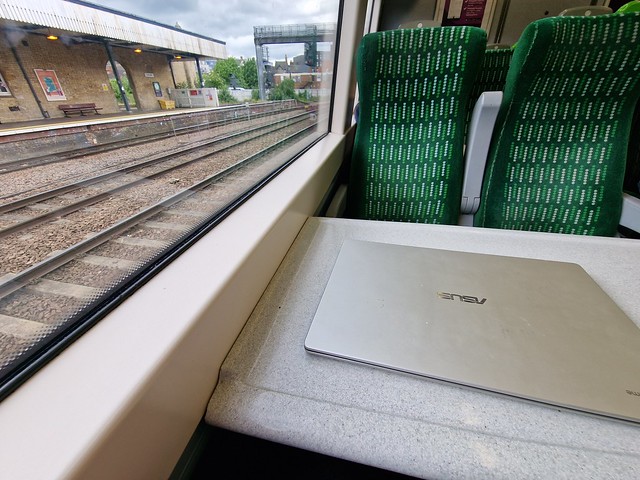 Table seat and laptop, what more could I need on a train…. 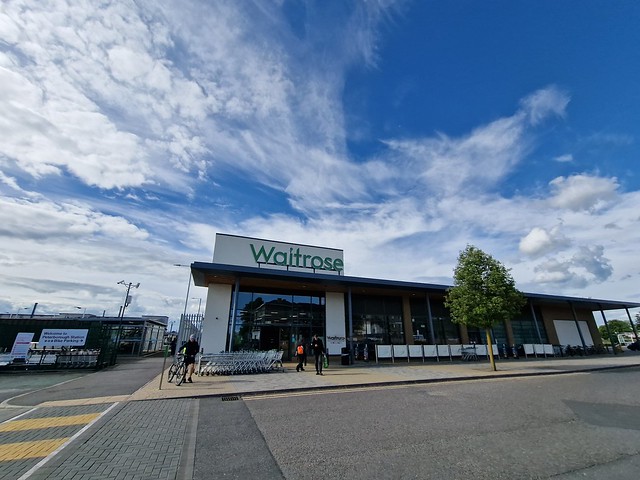 Feeling slightly decadent, and not having long to change train, I went to the Waitrose by Peterborough railway station. I spent 60p on flavoured water and also pondered how expensive everything in the store was. I think I’ve spent too long in Poland, if that’s possible (technically, it is possible thanks to the limits of my Schengen Visa, but I won’t get political again here). 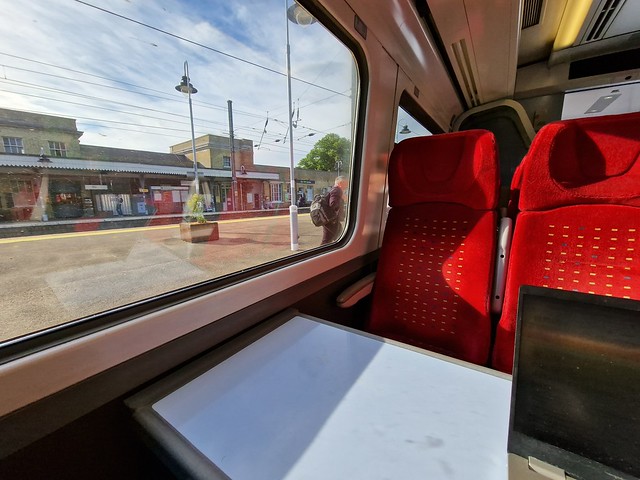 And the train to Norwich, another East Midlands Railway (or whatever they’re called, I get muddled up) service which wasn’t too busy, so I got a table seat. No power points that wasn’t entirely ideal, but you can’t have everything….. I enjoyed Lincoln, plenty of decent pubs, no shortage of history and a Toby Carvery in the city centre. I was fortunate to get cheap rail fares, and also a Travelodge at a reasonable price, because this is quite rightly a popular tourist destination.