I use London Underground a lot, so was strangely and frankly needlessly excited to use the Glasgow Subway, which is the third oldest network in the world. It’s also the oldest in the world still to be in its original form as there hasn’t been an expansion since it opened on 14 December 1896. It took them six years to build it and there are fifteen stations (and always have been since it opened) on the 6.5 miles circular route. What wasn’t entirely ideal was that in its first week there was a crash at St. Enoch station when one carriage ran into the back of another one. It didn’t discourage the locals though who were apparently mostly quite excited about this new service. There’s an Outer and Inner network, although they’re both the same other than they go around the circle in a different direction. There’s just the one line, so there’s not much chance of getting lost. The platforms, some of which are laid out differently so that there are separate platforms for each direction. And the train itself. Rather impressively, this is only the second set of carriages that the network has had, with the first ones in use between 1896 and 1977, and the second set from 1979 until today. There’s good news though, an entirely new set of carriages is being brought into usage from next year. The gap from 1977 until 1979 is that the network closed for an extensive modernisation and restoration, but there was talk at the time that it might not reopen due to falling demand.

This is a fantastic video of the period just before the closure in 1977 and it’s fair to say that it looks in a right old state…. The interior of the carriages, which felt comfortable enough to me. There’s the benefit that although it can get busy it’s unlikely that anyone will wait long for a seat given that no passenger is likely remain on for more than a few stops (unless they’re just sitting there going around and around which I assume must happen).

I paid £4.20 for an all-day adult ticket which allows unlimited use for the day, which isn’t an unreasonable price. It’s a shame that the network has never been expanded, but that does mean its retained its historic feel. The system is though easy to use, everything seems clean and the service is regular with trains every few minutes. 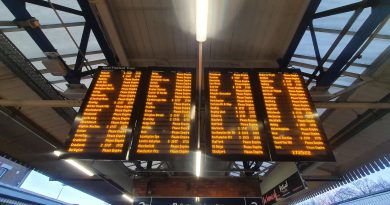