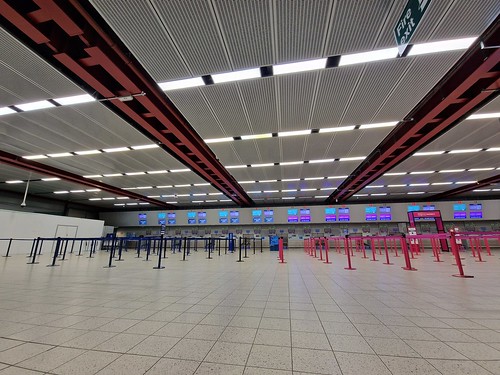 After my quite scintillating story of getting from Norwich to London Luton Airport (that in itself is a bit aspirational, Luton is hardly in London but I won’t go off on that tangent) it starts again in the airport terminal. I had enjoyed a pre-departure nap at home, so was planning to be hugely productive overnight in getting things done, which I’m pleased to say did work out. I know Dave Morgan will be once again surprised and delighted at hearing about these exploits of my very slightly odd travel. 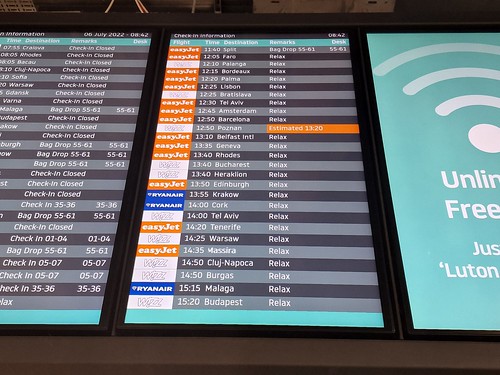 Two points. Firstly, I can’t relax before a flight, I have to keep checking the board. Secondly, note the only flight on the entire board that was showing as delayed.

So, what is there to do at London Luton overnight? Nearly nothing if I’m being honest. There is limited seating in the airport, although fortunately, I did find a space, not least as I got there so early. It’s a terminal which can’t really cope with the number of passengers it gets, and there were in the hundreds of people waiting at the terminal overnight for their morning flights, far more than when I was at Heathrow T3 a couple of weeks ago. I was pleased to note that the Pret landside opened early, so I moved there to enjoy a single can of Coke and three hours of charging my devices with their electricity. I’m not entirely sure they made much from my largesse. It wasn’t that busy though, I didn’t stop someone else from sitting down as it was never full.

Going through security was easy, other than my superglue was spotted in my liquids bag and they went off to test it. I’m not sure if there’s some odd drugs related use for it as that’s the machine they used, to swab it for drugs. The lady at security asked why I had superglue and I replied that it’s because I break a lot of things and want to fix them quickly. She seemed happy at that slightly odd answer. It’s actually because I was worried about my shoe breaking last year, which I’ve since replaced, but I’ve decided the superglue might be useful for all manner of reasons, so I’ve kept it. 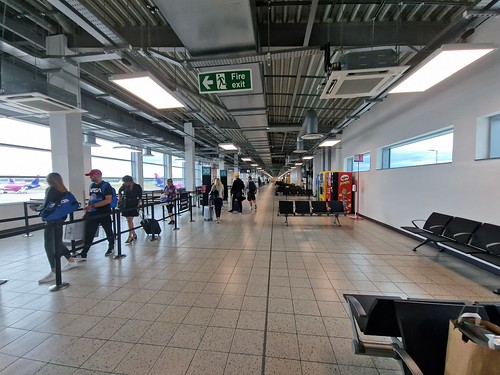 After lots of faffing about, and nearly entirely catching up on this bloody blog, gate 30 was announced for the Wizz Air flight to Poznan. I have no sort of priority on this flight and certainly didn’t pay for that benefit, so I meandered slowly around the back of the queueing system, whereas the people in the above photo are rushing to go through the priority line. I got to the front of my queue for unimportant people and a staff member waved me forwards. I mention I’m not priority and she shrugged and said she didn’t mind either way, which ironically meant I ended up ahead of most of the people who had been rushing. This had the exciting benefit and advantage of my being able to stand further ahead on the stairs down to the aircraft. 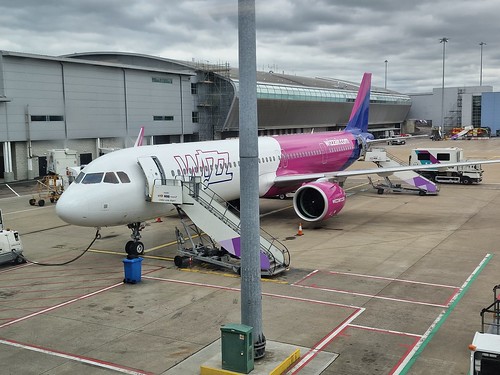 Here’s the aircraft, which had been slightly delayed on its inbound journey, hence why we were operating around forty minutes late at this point. It’s an A320 aircraft, registration G-WUKD, which Wizz Air have operated since new in 2018. 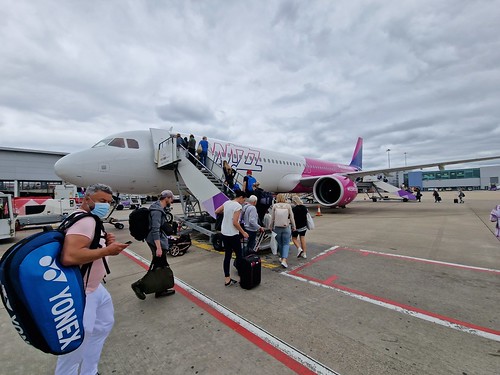 The boarding process. I had let people get ahead because I kept faffing about taking photos of the aircraft. I think people thought I didn’t get out much, but I just wanted to ensure this blog had some photos that weren’t blurry. Selfless I tell you, absolutely selfless of me. 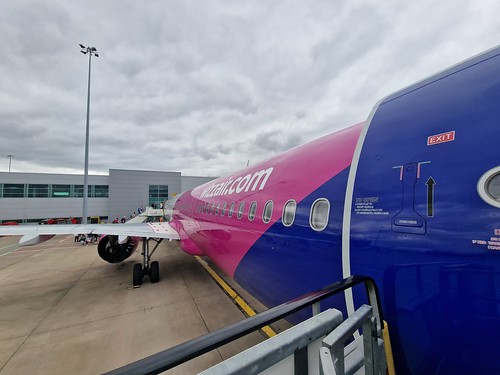 I could hardly deal with the excitement of being in a middle seat for two hours. But, I paid £8 for this flight, so there’s no way that I have anything to complain about. The aircraft wasn’t particularly comfortable, but it’s a short haul journey that isn’t much longer than some bus journeys, so it was perfectly sufficient. It was also just about full, although the lady in the row behind me was on the phone to someone in the terminal who had somehow missed the flight. She didn’t seem that concerned about the fact that her friend wasn’t going to get on the flight, I had hoped for a little more drama if I’m being honest.

I was quite embarrassed (although I’m not sure why, there’s a limited amount I can ever do about these things) at the British passenger who had a go at a Polish member of cabin crew, as he said he wanted to sit on the back row. The back row is often sealed on Wizz Air flights, sometimes for trim reasons of aircraft safety and sometimes because the crew sit there. Anyway, the helpful member of cabin crew politely told the man three times he couldn’t sit there. He replied “I’m sitting here, that’s the end of it”. It wasn’t the end of it, the crew member suddenly got bored of being polite and replied “Sir, you will need to leave the aircraft” and she clearly meant it. He argued, she stood there and asked him to make his decision. He grumpily moved back to his assigned middle seat further down the aircraft, but only after giving her some more abuse. It’s sad to see to be fair, but I’m pleased the crew member stood her ground, but I get the impression that she’s used to it, which is perhaps an even greater shame. The pilots sounded professional as well, we ended up arriving around thirty minutes later than expected, and they kept everyone updated. 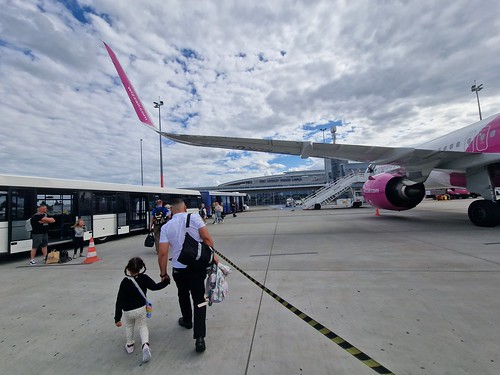 The airport terminal in Poznan is visible in the background, but we needed a bus to take us to the non-Schengen gates at the airport. I just held back, I was in no rush, but once again, fortune favoured me and I joined a queue which for reasons unknown moved so quickly that I was at the border control desk way ahead of those in the other parallel lines who had started queueing up before me. Then I got delayed because the border control lady, who was perfectly amicable and friendly, decided she would count my time in the EU. It seems this can only be done manually, there’s currently no way of them doing this using technology, so she carefully worked through all my passport stamps and it took her a fair while. I didn’t want to undermine this process, she was doing her job carefully, but I knew I was within the limits as I carefully use a Schengen calculator to ensure I’m not spending too much time in the EU. She thanked me for my patience and I was on my way, pleased to be back in Poland.

They were then stopping every traveller and asking if they had food. I clearly didn’t, I rarely keep food in my bag long as I’m too excited to eat it rather than carry it about (my food I mean, not the bag), but another man had his egg taken off him. I have no idea why he had an egg, I assume it was hard-boiled though unless he had been very careful during the flight. 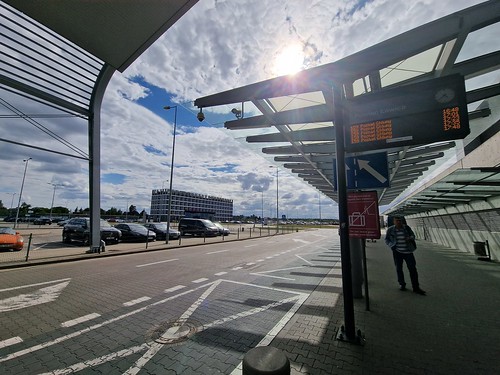 With all that excitement out of the way, I got a ticket for the bus. It’s possible to walk from Poznan airport to the city centre, but it’s a ninety minute walk and, frankly, I couldn’t be bothered, especially since the bus ticket is under £1. Dave Morgan would be horrified, I hope he doesn’t read this. I think he walks all distances of under 40 miles. 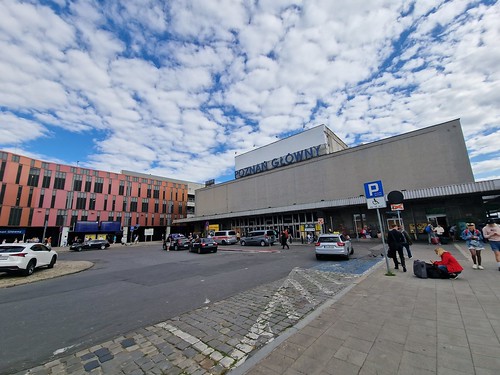 The bus went to the central railway station in Poznan, which is a city I’ve visited before I think on three occasions. I do perhaps need to start going to some new places, but I like the reassurance of these reliably excellent Polish cities. 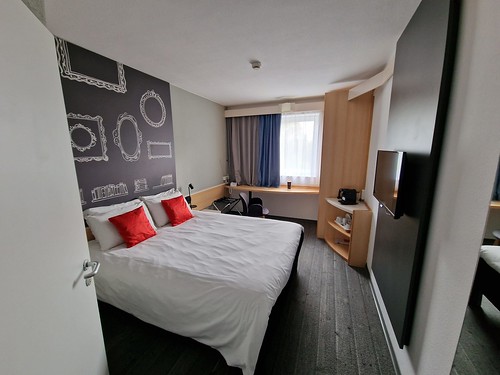 Back in the Ibis Poznan Stare Miasto, which I had forgotten I’d stayed at a couple of years ago. All reliable as ever, friendly staff, a functional room, working air conditioning (although, fortunately, it’s not too hot in Poland, unlike in Krakow a couple of weeks ago) and a window that opens. Just lovely. 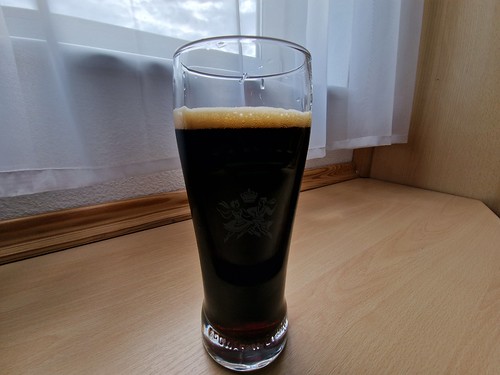 My welcome drink of a Żywiec Porter. It’s definitely good to be back. 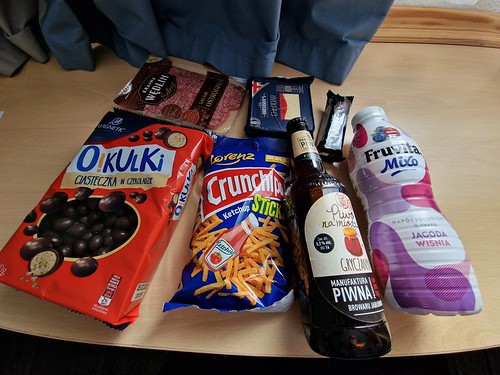 There’s a Biedronka supermarket next to the hotel and I was sufficiently tired not to have to want to go finding food anywhere else, so this was a handy option. So this little selection, which looks like a kid who likes alcohol has bought it (there’s a reason for that), just had to do. I’ve posted this so I can comment on the price, this came to just over £5. Note the British cheddar cheese at the back, which would have likely cost about £3 on its own in the UK. I probably didn’t need all this, but I hadn’t eaten all day and I felt I deserved a little treat.