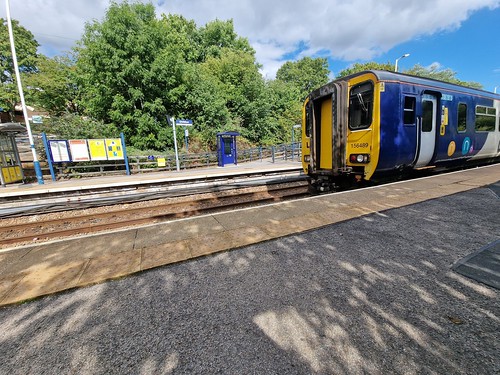 Setting off from Shildon railway station after my visit to the Locomotion museum, which has been here since 1825 and its siting here led to a great expansion of the village during the nineteenth century. Unfortunately, there’s not much here in terms of station infrastructure, even slow and steady improvements over just under 200 years should have seen more facilities. The nearby museum has though helped usage of the station and that is likely to increase from the expansion of Locomotion. 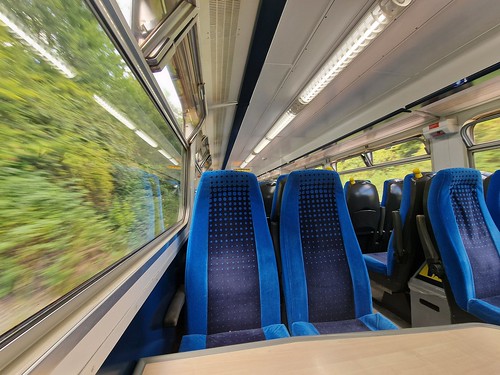 It’s a short rail journey into Bishop Auckland along the route of a line which is also original from the beginnings of the Stockton & Darlington Railway. 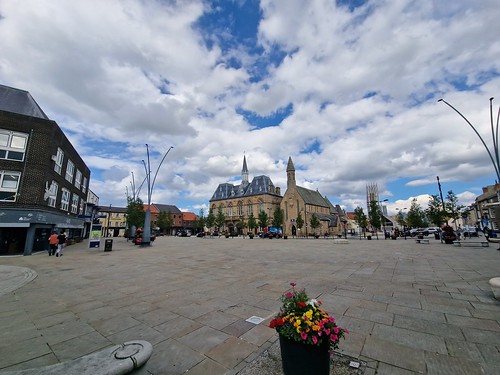 I don’t think that I’ve visited Bishop Auckland before and the main street from the railway station didn’t look anything particularly exciting, but then this rather grand and lovely market square appeared into view. 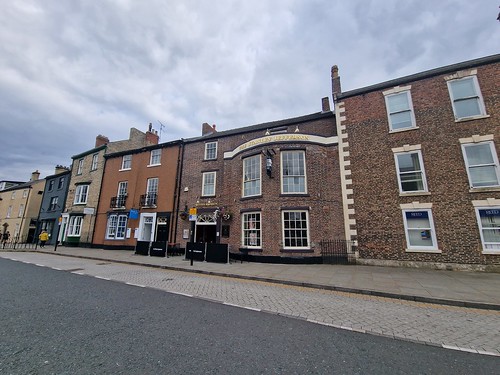 I thought as though I might as well pop into the JD Wetherspoon, the Stanley Jefferson. I clearly don’t know my comedy history as I assumed that this was some Victorian benefactor to the town, but instead:

“The Laurel Room, in Bishop Auckland Town Hall, is named after Stan Laurel. Born Stanley Jefferson, Stan Laurel is better known as the thin half of the famous double-act Laurel and Hardy. Stan’s parents managed the town’s Theatre Royal. Stan was christened here and, in 1903, attended the grammar school.” 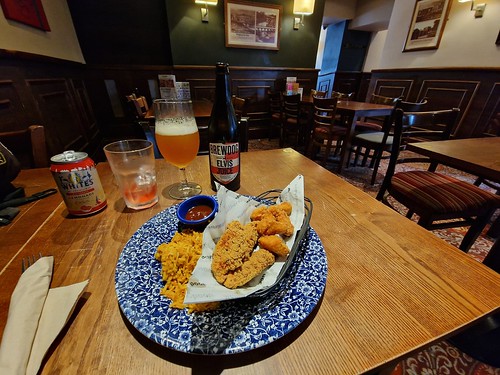 Not overly decadent, but entirely satisfactory and there were also numerous power points to keep my devices charged. I seem to focus too much on that, but I can’t be one of those care-free people in life who wouldn’t collapse into a state of nervous tension if their phone died.

The pub seems well reviewed, but of course not everyone is surprised and delighted. I liked this one:

“4 Regular Real Ale enthusiasts Abbott Ale being our favourite. Today, no Abbott next choice 2 were pulled then off. Next choice also off. When we questioned it we were told “Well we don’t sell much Real Ale on weekends it’s mostly SHOTS ” !!!. What a load of insulting rubbish!!”

I make no comment on Abbot Ale as that would be cheap, but I was amused about the “on weekends it’s mostly shots”. I know a pub that was run like that…. Ah for the days of selling Apple Sourz. 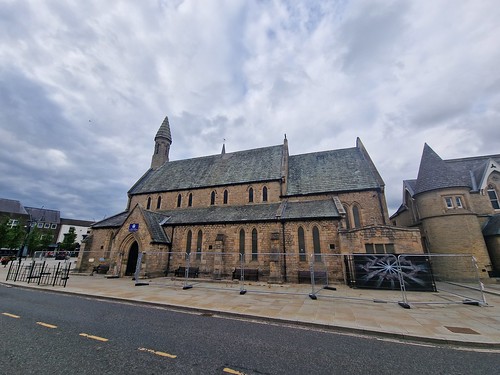 St. Anne’s Church which is Grade II listed, but is relatively late for a town’s main church, with the building having been designed by William Thompson and dating from between 1846 and 1848. It was though built on the site of a former medieval chapel, but it’s not currently in good shape and is on the Heritage at Risk Register. It received funding a few years ago from the National Lottery Heritage Fund and Historic England but another project is needed to secure the building. 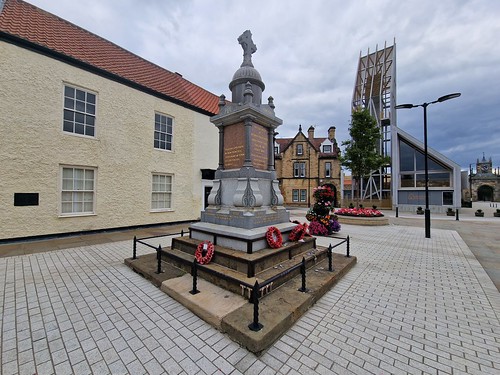 The town’s war memorial, which was moved a few years ago from its previous location on Station Approach. 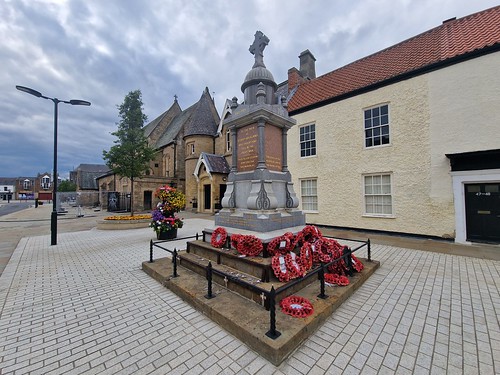 A line was added in 1982 to note the Falkland Islands war. It’s a beautiful monument and in a nice area of the town, although those steps could do with a bit of tidying up. 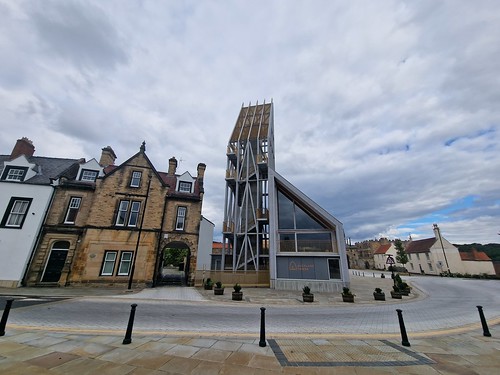 Auckland Tower, which I had though was something to do with the fire service, but it’s actually a 29 metre high viewing tower. It was designed by Nìall McLaughlin and is meant to look modern but also to reflect the design of historic buildings. It has sweeping views over the castle and the Wetherspoons. 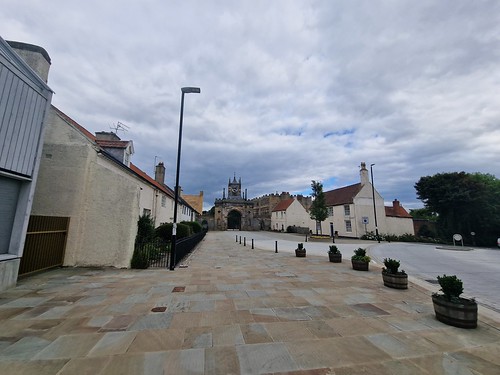 The town grew up from when in 1183 the Prince Bishops of Durham built their country retreat here, which later became Auckland Castle. 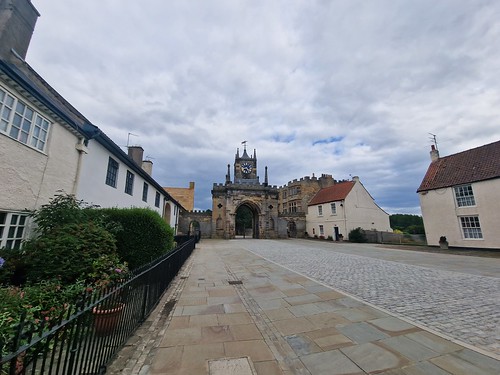 The entrance to the gateway, this area certainly feels salubrious. 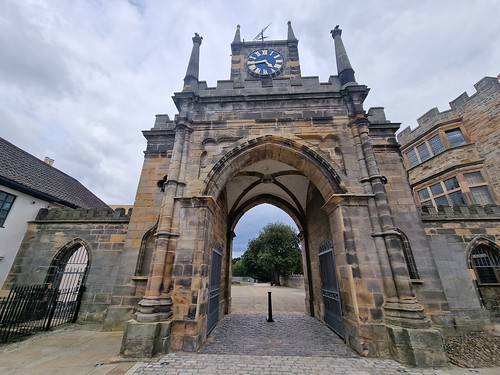 The gateway from outside. 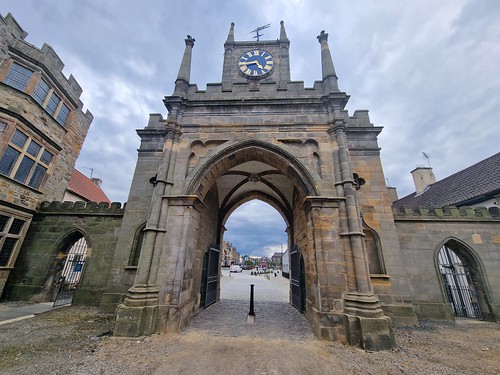 And a nearly identical photo of the gateway, this time taken from within the castle estate. The gateway was constructed in 1760 and was designed by Sir Thomas Robinson of Rokeby for Bishop William Trevor. 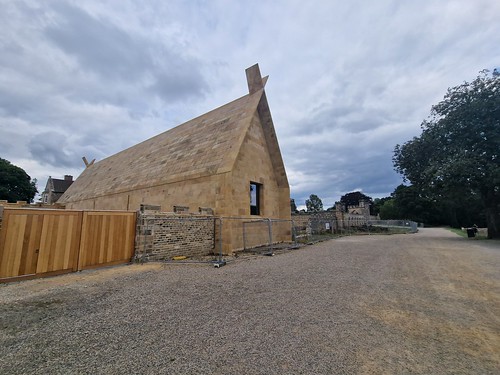 A rather glorious building, I can’t say I’ve seen one which has combined building materials like this. 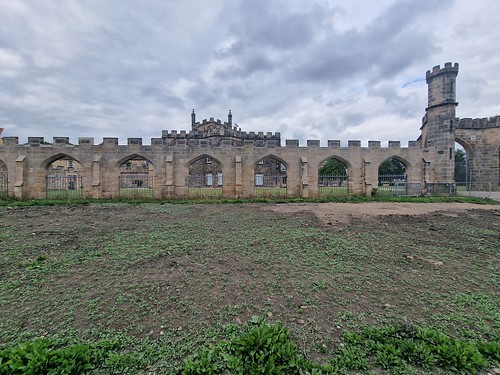 One of the external walls to the castle. 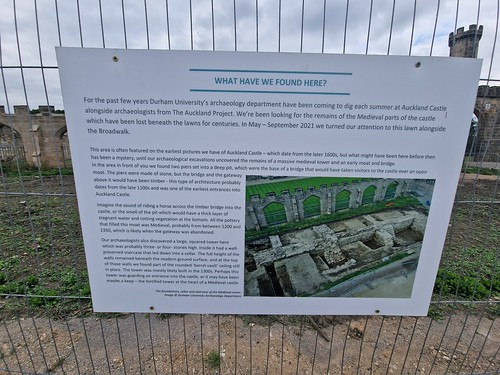 And the reason I took the previous photo is that this interesting heritage board shows what they discovered on this site during recent archaeological digs. 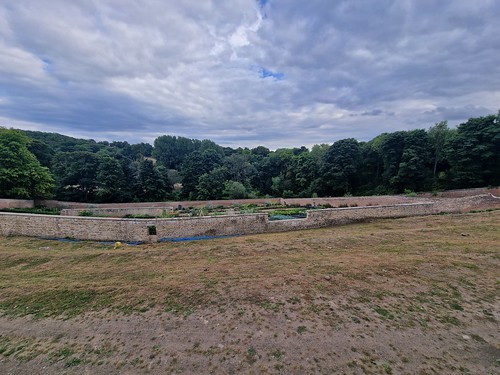 Looking over to the gardens. 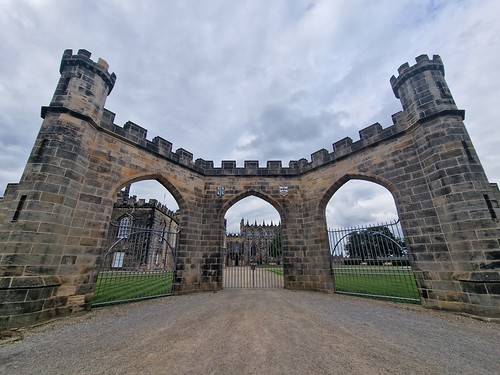 The entrance to the castle, which is open to the public during the day and there’s plenty to see during a visit looking at their web-site. If I come back to Bishop Auckland, I think I’d like to look around these buildings. I understand that the town feels it needs a major economic boost and it’s trying to create something of a tourist attraction of this castle, and other projects such as the aforementioned viewing tower and the gardens. They are aiming to encourage people to stay for a couple of days, rather than just briefly popping to the town. So, in short, trying to get people not to do what I did. The castle is still owned by the church and they use part of the site as offices. 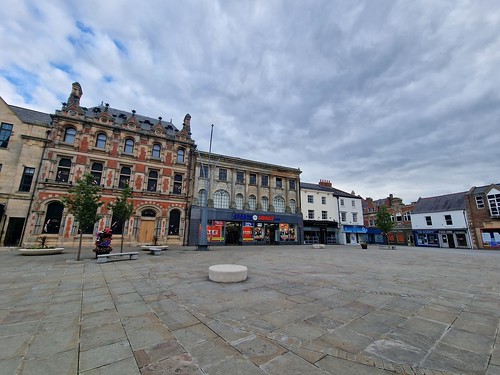 Back in the market square and I was slightly surprised seeing such a grand building being used by Sports Direct (not that there’s anything wrong with that, but in a wealthier town it would likely by tea rooms or something). There were a fair few empty shops in the town and it didn’t have a vibrant atmosphere, despite all of the heritage and history all around. 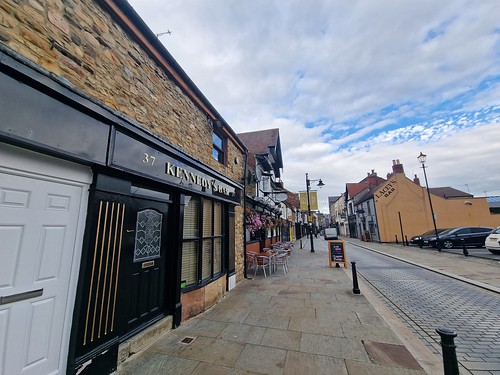 Bondgate, a quaint street which is more what I’d expect from a provincial town and this was once the retail heart of Bishop Auckland. Shops down here are mostly independent retailers, similar to The Lanes in Norwich, something a little different from the usual number of chains. 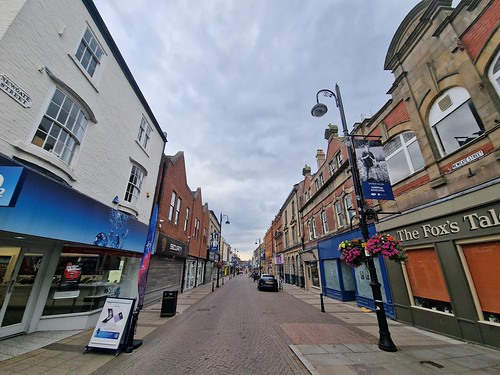 Back on Newgate Street, walking back to the railway station. 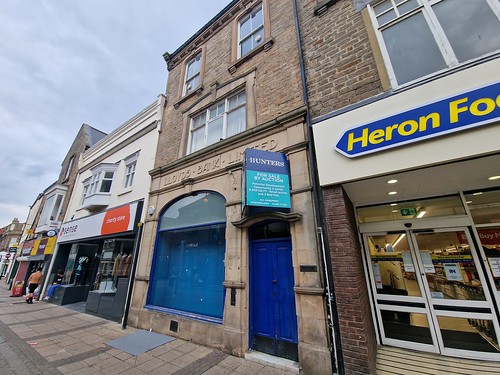 I was rather taken by this building (not Heron Foods, but the former Lloyds) and it would probably make an interesting place to live, especially if there’s access to the bank’s former vault. 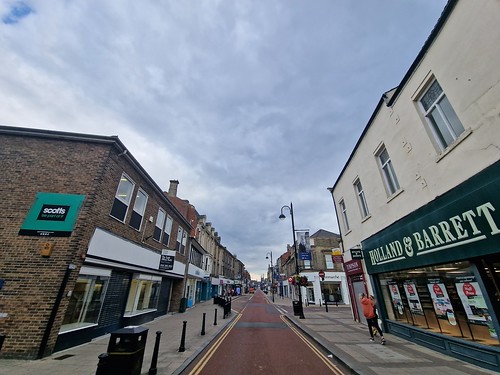 The number of shops to let is visible in this photo, there were probably around twenty along Newgate Street. 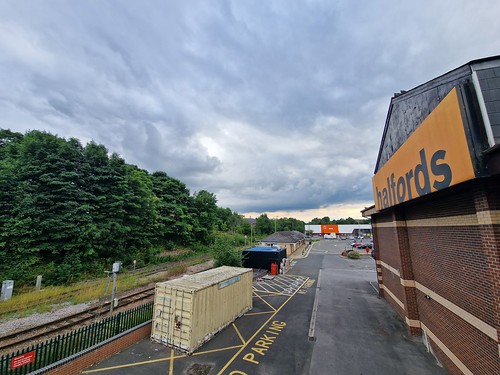 The town’s railway station (not Halfords, the building in the middle of the photo) which was opened in the 1980s after they had demolished the previous one. It was (in my view at least) yet another sad chapter in the history of British Rail, the demolition of a grand 1867 railway station to be replaced with a completely inadequate replacement. There are lots of photos of the old station, which is buried underneath Halfords and the other retail units, at http://disused-stations.org.uk/b/bishop_auckland/index.shtml. 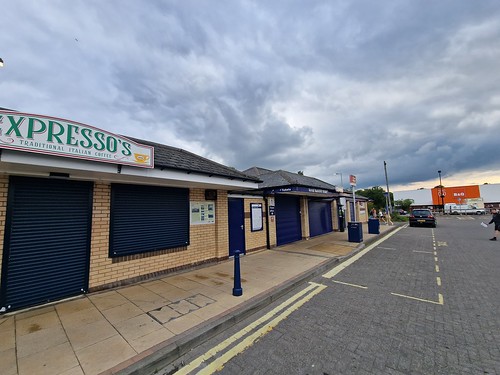 The inadequate station is open for limited hours and for the rest of the time, passengers have to walk around the side to get access to the platforms. 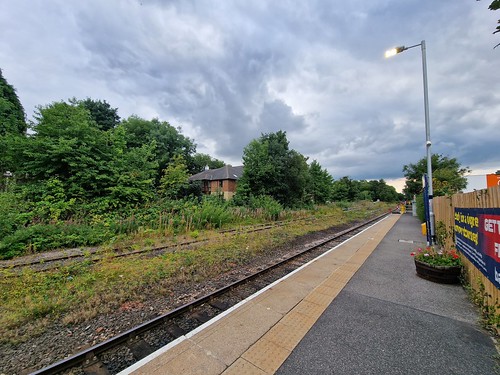 The end of the line for the rail network, although the line continues on for 18 miles to Eastgate station as a heritage railway set-up. It closed long ago for passengers, in 1953, but freight services continued until 1992 which is why the line wasn’t entirely lost. Full credit for the heritage railway keeping it open, but this should ideally be opened to passenger services once again, and that has been suggested as part of the Government’s Restoring the Railways project. As it’s a very marginal constituency, it has a decent chance and I understand funding has been made available for a feasibility study. 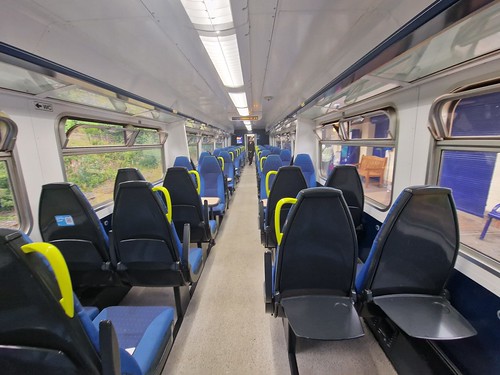 With that the train to Darlington came in, another efficient Northern service. I had enjoyed Bishop Auckland, but I had expected it to be wealthier and not have quite so many empty retail units. However, they clearly have lots of exciting plans for tourists and I’d like to spend longer in the town. 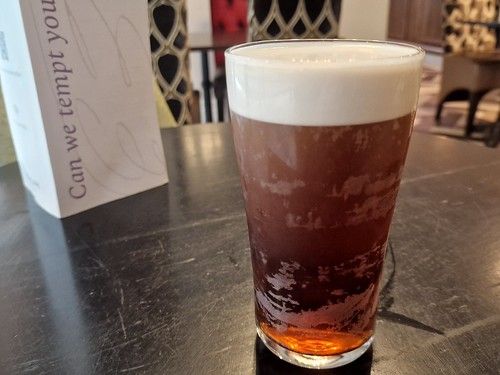 Back in Darlington, ready for another peaceful night in the Mercure with the drinks in my little fridge being handily restocked again. And I got to use my welcome drink on a free Extra Smooth Ale from John Smith’s, albeit a little belatedly. How lovely (well, quite lovely in terms of the drink).