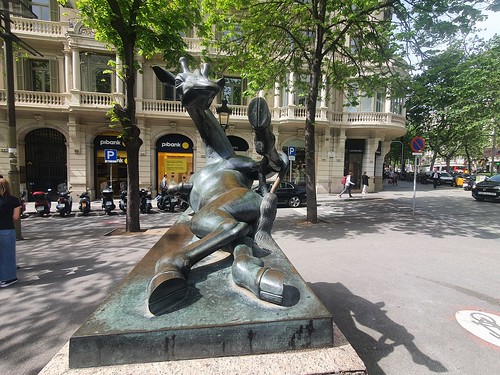 Sculptures aren’t often easy to define as cute, but this giraffe is winning the argument here, although it’s designed to look flirtatious. I wonder how that bid was put to the city planners, as a vision for a flirtatious giraffe is certainly something different. Known as Girafa coqueta, it was designed by Josep Granyer and placed here in 1972. 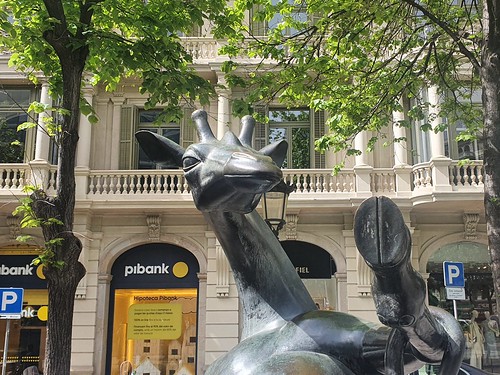 Perhaps Prince of Wales Road in Norwich could do with a flirtatious giraffe? We had quite a lot of meandering around in the morning as it was a ninety minute to our destination of the Sagrada Família. 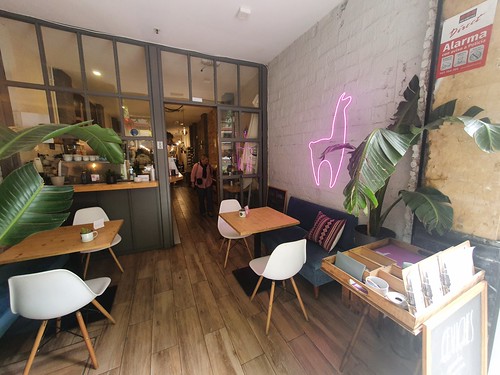 Lato Cafe, a rather pleasant spot for lunch. The service was attentive, but the beer selection was poor and limited to a choice of one. Not ideal, but the surroundings were delightful and the staff particularly welcoming. 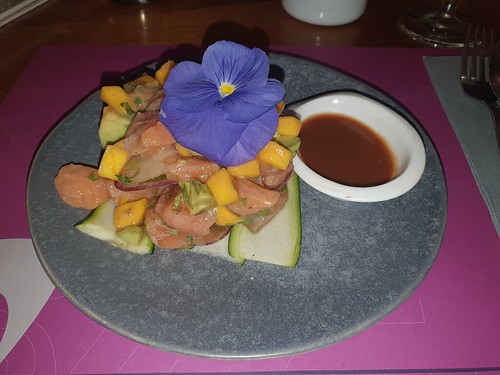 Beautifully presented, a sweet ceviche, which felt like healthy eating to me, an ideal way to complement the craft beers I was planning for later on in the day. 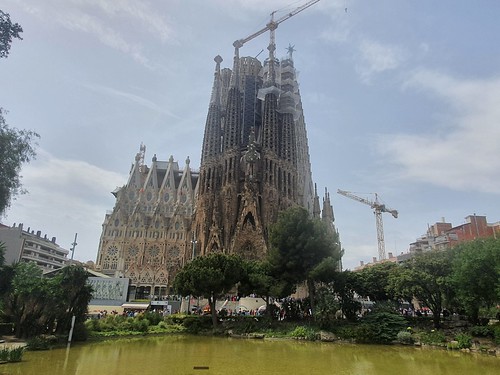 Ever the professional photographer, I’ve put a slight lean of the Sagrada Família in here. The new tower is visible on the right hand side with that star thing at the top. Work started on this cathedral in 1882, with Gaudi taking over as the architect the following year and it’s in his style which has made the building one of the most identifiable religious structures in the world. It is meant to be completed in the 2030s, although I can imagine that the timetable will slip somewhat as it’s already one of the longest running architectural projects in the world. 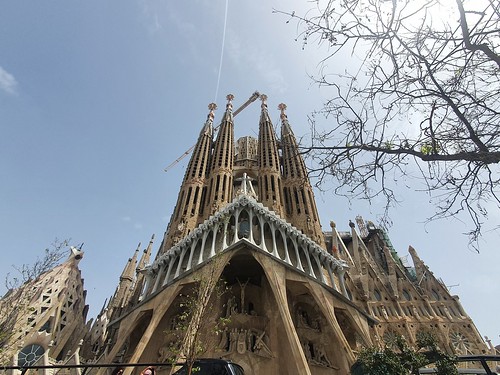 I didn’t go in because I’ve been in before and the admission charge is expensive, at over £20. I climbed the tower last time and the building is certainly a work of art. I’ll go in again when they’ve finished it. 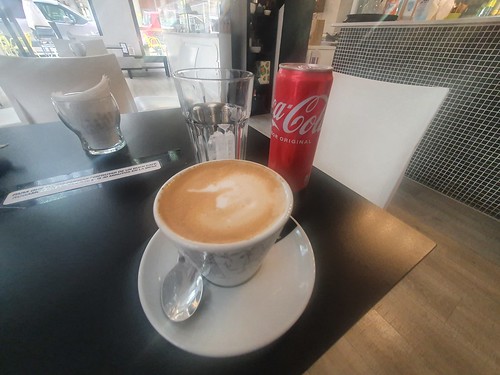 Whilst Bev was inside the cathedral, Ross and I popped to a local cafe. They had signs sellotaped on every table saying that visits should be limited to thirty minutes and although I approve of the general passive aggressive nature of the messaging, it did make it feel unfriendly. The service was warm and friendly, but we were the only customers in there, so I decided that we could safely have a stay of over thirty minutes. 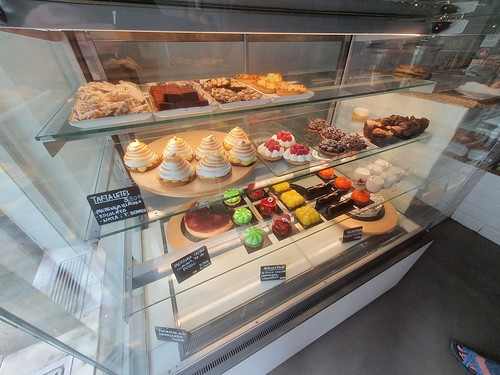 When I return to Barcelona, which is now nearly certain, I will spend more time investigating the cake options. 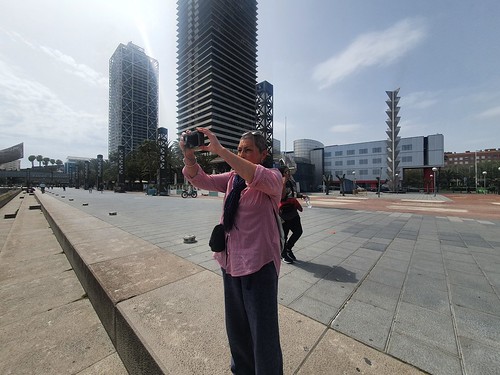 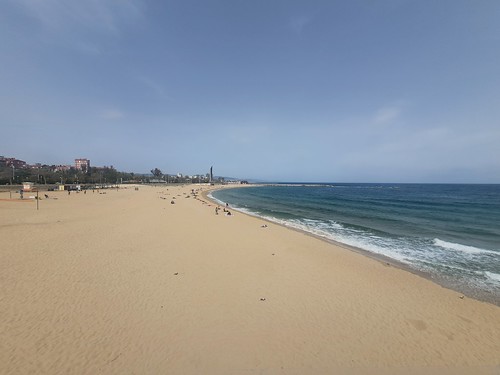 We had an hour or so walk to the sea, but after all of that effort, Ross and Bev refused to go swimming. 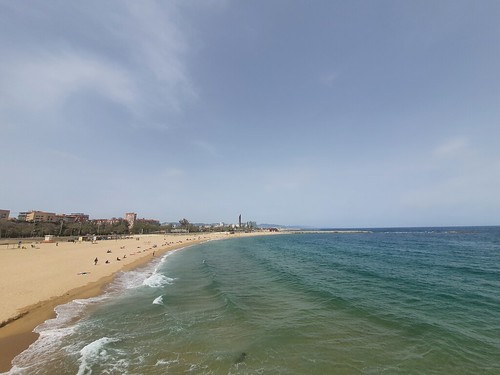 I must admit that I wasn’t tempted either. 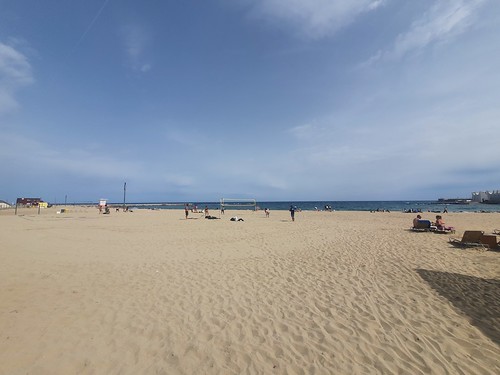 There’s a large beach area and there were people playing volleyball and the like, although there was plenty of space for anyone who did want to sun bathe. 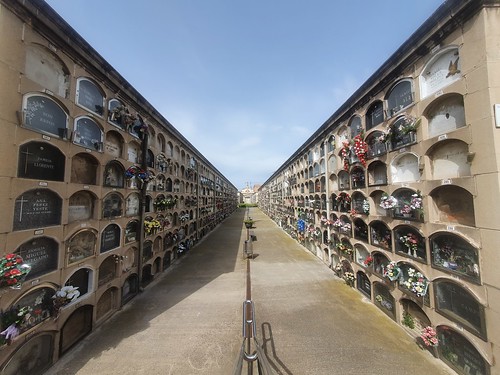 I had identified a craft beer bar to go in that Ross would like, but it didn’t open for forty minutes, so I diverted us to Poblenou Cemetery. It’s a substantial sized cemetery where I imagine there are tens of thousands of burials. The first cemetery was laid out at this site in 1775, but it was destroyed by Napoleon’s troops  and so was reconstructed in 1819. There have been numerous extensions added to the cemetery since given the number of burials. 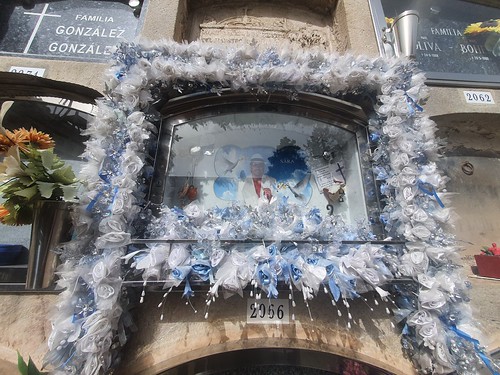 Some graves were more ornately decorated than others. 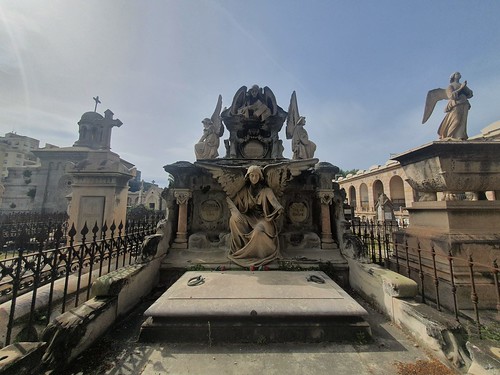 A little ostentatious perhaps, but this is one of the many family tombs. Some of the tombs had been emptied out, I assume with the knowledge of the cemetery, but it’s very much an active site. 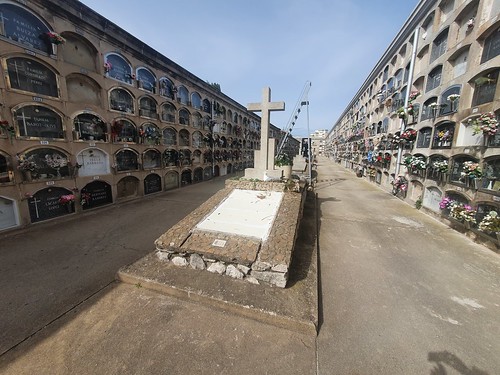 There was a lot of squawking when we walked past here. 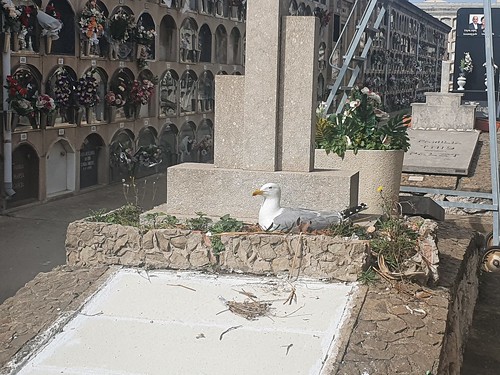 The culprit, a seagull protecting its eggs. 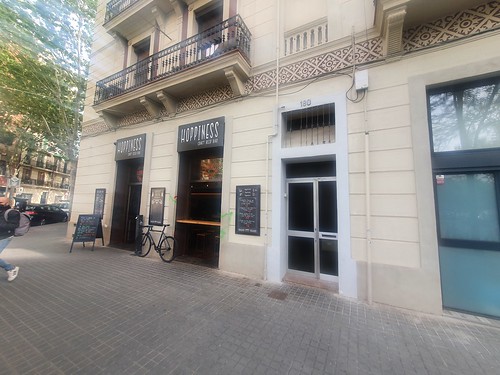 This is just a little confusing, as one of my most favourite bars is Hoppiness, but that one is located in Warsaw. 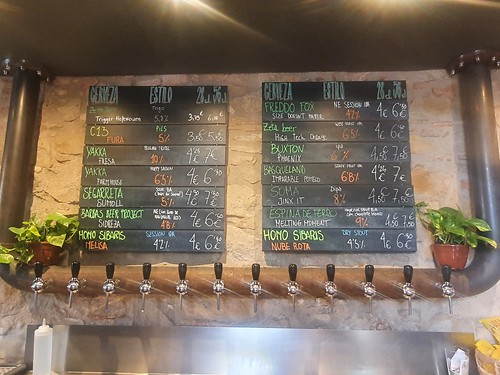 Some interesting beer options and the bar surroundings were laid-back and welcoming, so it appears that I now have two bars called Hoppiness that I am quite partial to. I was very impressed with the beer here, I went for the Don’t Jinx It from SOMA beer, which was a formidable 8% DEIPA showing just how good Spanish micro-breweries can be. And if that wasn’t enough, I then went for the 11% Melting Moment imperial stout with white chocolate, another rich and decadent beer. This bar really was quite a treat, I’d certainly come back here. 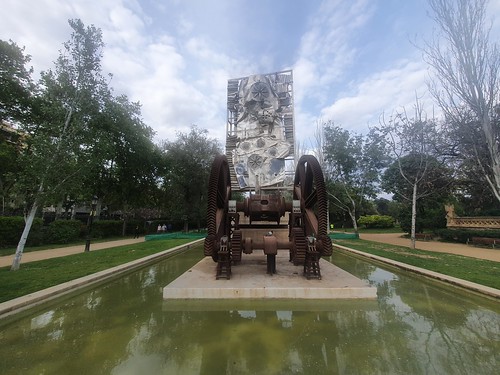 I spent a little too long deciding how much I liked Hoppiness, which led us rushing by the Monument of Tribute at the large Parc de la Ciutadella. Just enough time for a quick photo though. 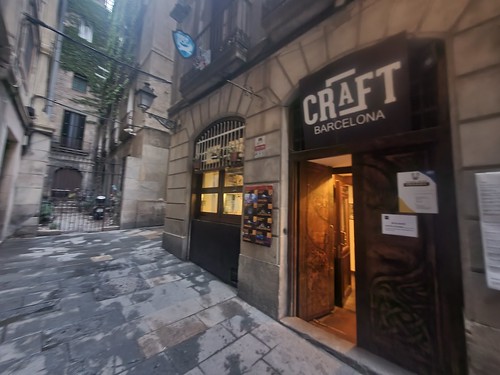 Our evening meal was again booked using The Fork, with 30% off the food at Craft Barcelona. 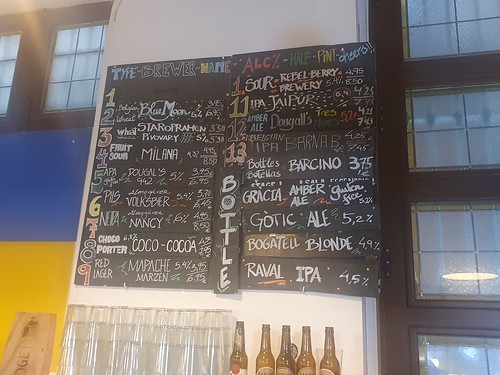 The drinks selection had a few Thornbridge options which was very acceptable, although I’ve had these before and wanted to have some more Spanish options. I had the Carolina del Sour from Milana and the Nancy from Cerveses Almogaver, the latter of which was an intriguing fruity and hazy IPA. 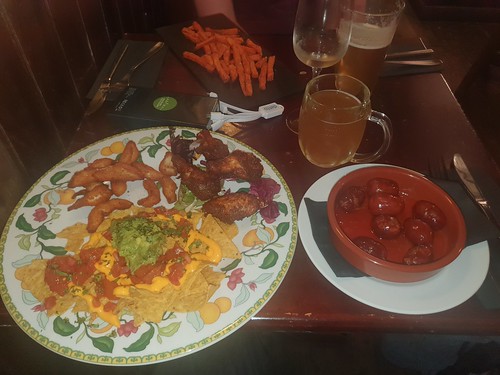 My bar food was entirely adequate, although the chorizo in cider sauce was a little bland, which is something that chorizo really shouldn’t be. However, the Nachos, chicken wings and the like all tasted fine, although with regards to the fried foods, it’s hard to get those wrong and Ross was content with his burger. Bev muttered for several minutes about her steak, but Ross and me didn’t get involved, although in the end, they didn’t charge for the meal and so I thought that was very positive. To my annoyance though, the restaurant pretended to The Fork that we had no showed, which I thought was petty of them. I did ask them to correct that, but they didn’t, so The Fork intervened directly. Disappointing and shoddy I though, I was going to leave them a positive review before they tried playing that game. I had quite liked the venue, but it’s one I hardly dare go back to now. 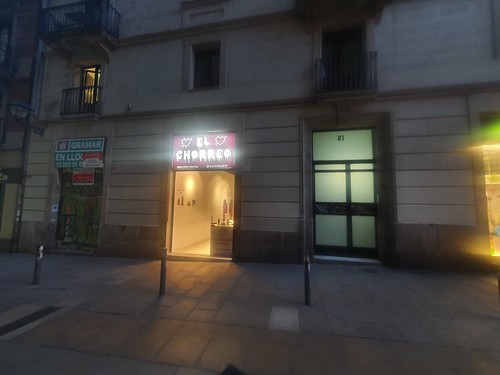 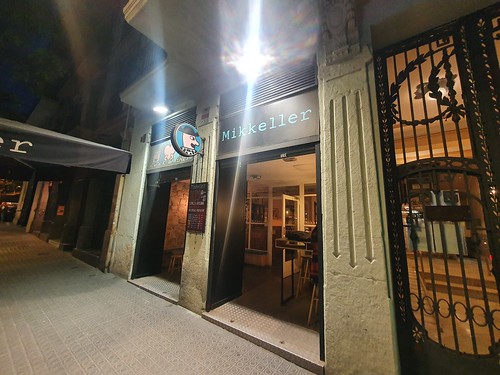 Mikkeller, an on-trend craft beer bar which has quite an international presence, particularly in their home territory of Scandinavia. 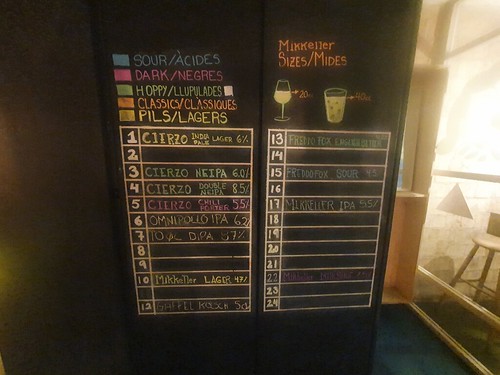 The beer list by the door, with quite a lot of gaps. I went for the La Federal from Cierzo Brewing Co, a porter which has chilli in it, with that heat being evident. 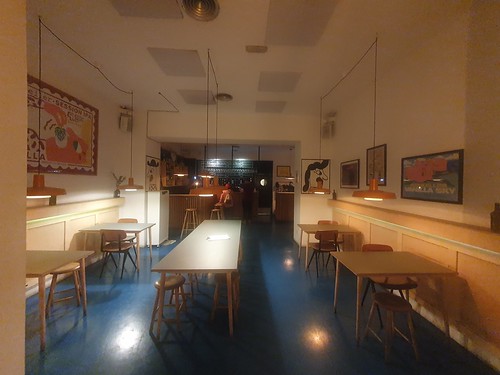 Mikkeller wasn’t as busy as I expected, I had thought it might be quite busy in the evening. Given that the staff member wasn’t doing much, I thought they were a lacking a little in engagement, but I had beer and so I was entirely content. It wasn’t clear whether food was served or not, it was mentioned on the web-site, but didn’t seem available and Bev had hoped for something as she had only eaten half a steak. It was though a suitable nightcap, before we got the Metro back to the apartment, with this time Bev managing not to post her ticket into the machine itself.