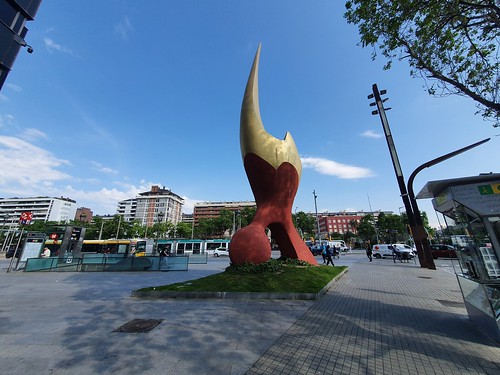 Our final full day in Barcelona was spent walking yet again, this was a surprisingly healthy week, even given all the craft beer bars that Ross demanded to go to. This is the Earth and Fire sculpture, designed by Joan Gardi Artigas. I’m not quite sure that I understand the point of it (excuse the unintentional pun), but I suppose it adds something to the public realm. And there are plenty of sculptures adorning the street of Barcelona, it’s an artistic city. 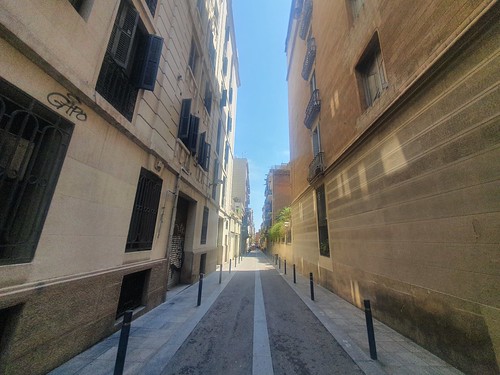 I very much like Barcelona’s grid pattern of streets, it feels very ordered. This is an interesting part of Barcelona’s history as their grid pattern shouldn’t logically be there, it’s an ancient city which had meandering medieval streets, not a new settlement such as those in the United States where planning was required. It’s all down to Ildefons Cerdà who connected the old city to some smaller satellite settlements with an urban infill which was very orderly. This took place at the end of the nineteenth century and so is relatively recent, but it all integrates so well into the older areas that it feels like the entirety of Barcelona is neatly laid out. I don’t think it would be controversial of me to say that they made a much better designing modern Barcelona than the British did with Milton Keynes. 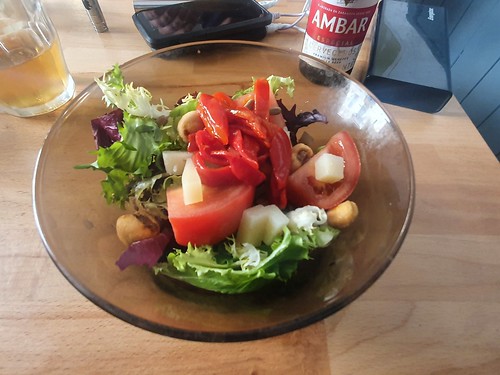 Lunch was at Taca de Cafè which is very well reviewed and has a relatively small menu, which always feels reassuring to me in smaller premises. The beer was generic, but the starter of the three course meal was suitably refreshing. 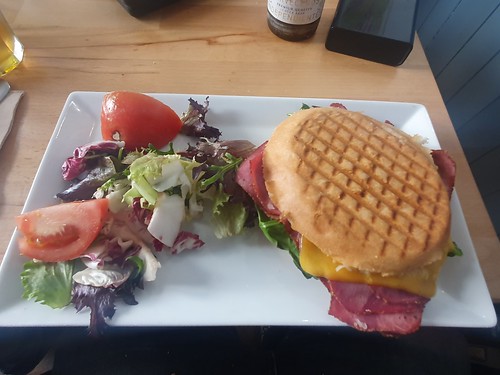 The pastrami bagel was adequate, I removed the cheese and the pastrami itself was a little devoid of taste and I don’t think it needed to be heated at all as that seemed to make it lose flavour. Presentation was a little slapdash, such as the marked tomato which they could have just chopped up for the salads rather than presenting it like that. But, I didn’t have time to be too negative, as Bev was muttering something about her pasta meal that she was carefully working through, muttering something about bland. 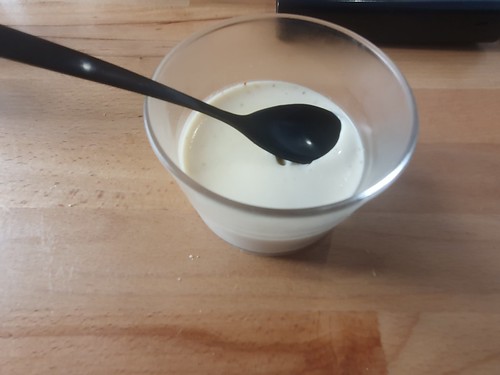 The dessert situation was a little odd as the waiter listed several items and we all ordered different things and we all got the panna cotta that I had ordered. It was again adequate, but I’d say this meal rarely moved beyond that, I had expected some more bursts of flavour from a local cafe that was so well rated. The prices were though moderate and the service was attentive and polite. I would say that it all seemed quite authentically Spanish in the set-up, but that implies that the food in Barcelona is generic, which it most certainly isn’t. The concept was good though and lots of customers clearly enjoyed their experiences here. 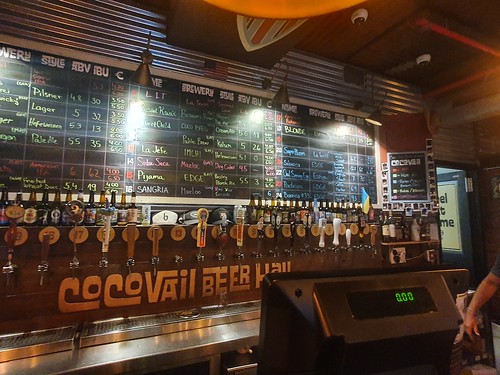 With lunch out of the way, Bev thought she’d like to go a modern art museum, which doesn’t overly excite me, and I think it’s fair to say that she was generally in agreement with my assessment when she returned. Ross and I went to a craft beer bar, CocoVail. They had a few decent options on, with most beer styles being covered. 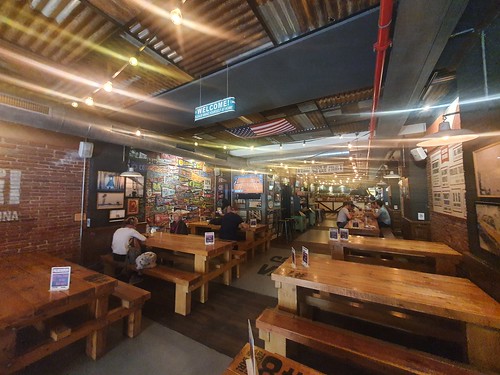 It’s less bar and more beer hall, a sizeable location that seems to be a mixture of German style design and American food. The beer selection was reasonable, although not exceptional, and it was relatively peaceful when we were there. There were though some British stag groups descending and it would be wrong to generalise and say that they were raucous and showed a lack of respect to their environment, so I shall just hint at that. Straight off the plane and straight into the bars, which is acceptable perhaps if drinking decent beer and not getting drunk by 15:00, but I mustn’t judge. 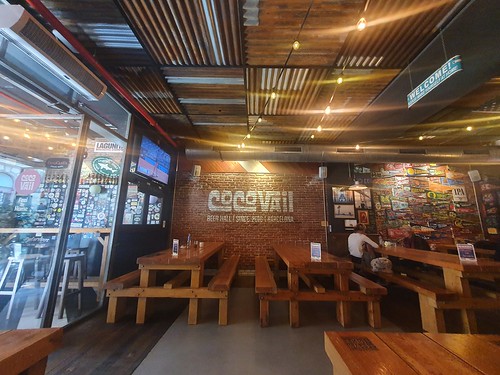 The table set-up here shows that they’re used to dealing with larger groups, I can imagine that this is quite a loud environment in the evenings. 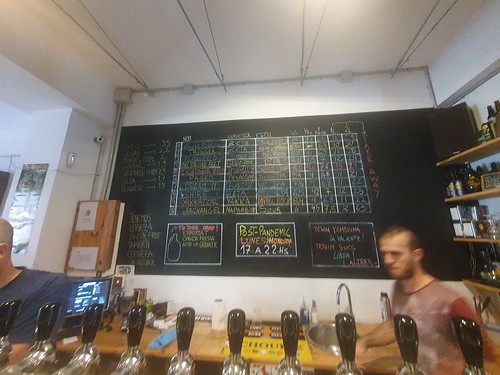 Next stop was the Growler bar, a quirky little place where I went for the really rather excellent Cure for Cold Feet from Freddo Fox brewery, a not insubstantial 8% DNEIPA. We were quite tired by this time, several days of walking everywhere had started to take its toll, but we bravely battled on. They had a range of bottles as well to top up the options on the board, a wide range given the size of the venue. This constant use of blackboards across the craft beer bars makes things much easier, you don’t get that in Nuremberg…. (well, I did in one venue, but I didn’t get any customer service there, so that wasn’t much use as an overall package). 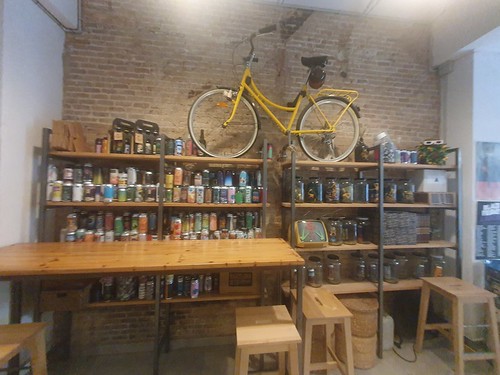 The internal decor, which was perhaps sometimes style over comfort in terms of the design as some of the seating options were a little uncomfortable. But the service was polite and the surroundings were comfortable. It was at this point I could have had a nap, but I don’t think very many bars appreciate their customers doing that. If I had a pub, I don’t think I’d put a bike on the wall, but there we go, everyone is different…. 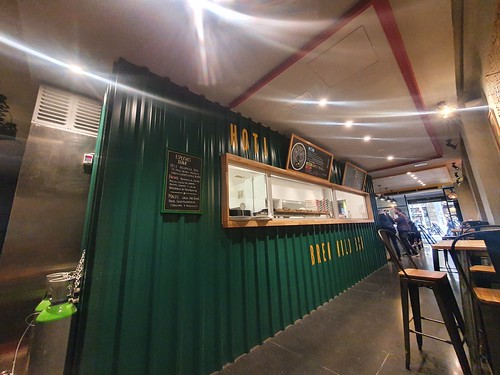 Final bar of the day was Brew Wild and I went for the Beti Smile by Gross and Onda Vital IPA by La Quince Brewing. This is a venue that I would like to return to, and likely will, it has a bar area at the front and a large restaurant at the rear. It was quieter than I had expected, but the Spanish do eat late and so I’m sure that it got much busier later. The food is primarily pizza, so that would have been me more than happy. Polite service and the beer selection was listed on Untappd, something that I always comment favourable about. It’s a very well reviewed venue and I liked the informality and wide range of beers, it was all suitably on-trend. 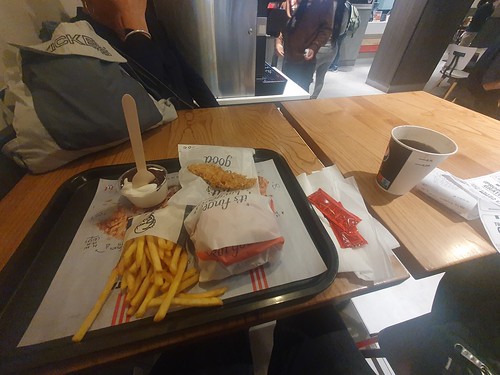 And that was that, we had planned to go to a Nepalese restaurant, but tiredness had crept in and so we agreed to get the Metro back to the apartment. KFC was a handy and convenient option, with Ross checking in advance that they had screens so he didn’t have to order at the counter. I bought some cheap meal deal, Ross appeared at the table five minutes later with half the menu on a selection of trays. There’s not much that I can say about the food, but it’s not as good as KFC in Poland. I think it’s fair for me to mention Poland here, I haven’t done for a while…. 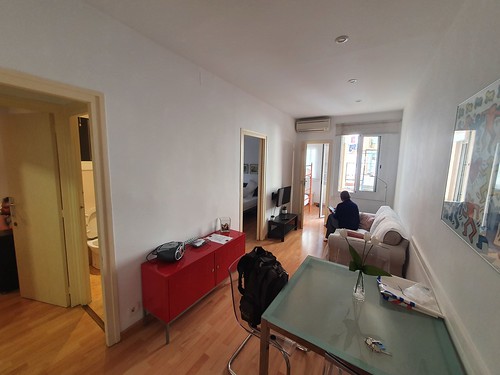 And, this is the apartment, three bedrooms and all sufficiently comfortable, although it’s not as luxurious as an Accor hotel of course. I very much appreciated the fan in my room as I’m not one for heat. Bev worked out how to get water from the sink, which is something that perhaps shouldn’t have been as complex as it was, and it was entirely beyond me. The kettle also didn’t work, but the hostel owners (who rent out the apartment) acquired us a new one and Bev enjoyed making lots of cups of coffee. 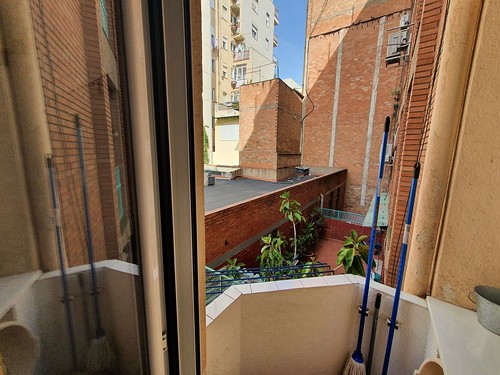 And Bev got the private balcony, which she didn’t utilise, not least because it was being used as a cleaning storage area and there wasn’t really space for a chair or any other little luxuries. The weather remained moderate all week, not too hot and so it was always a tolerable temperature for me, although this is the day that was the hottest and so I did seek out shade during our time walking.

As another aside, I’m getting a little behind with the blog, so I will do my best to get a burst of posts out, as I don’t want to upset my very loyal (and very small) readership who must be getting quite upset at the moment.