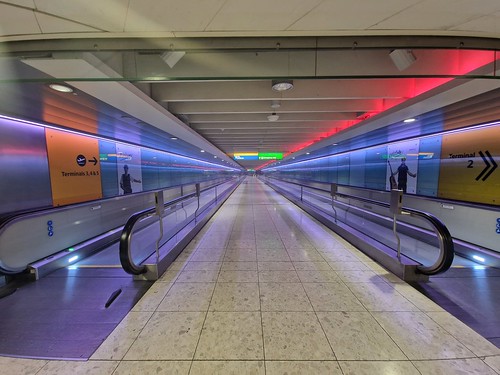 After the excitement of being at Heathrow T3 through the night started to become marginally less exciting, I decided to walk through the bright lights of the walkways to get to the main terminal. It’s surprising how quiet Heathrow is at 03:00….. 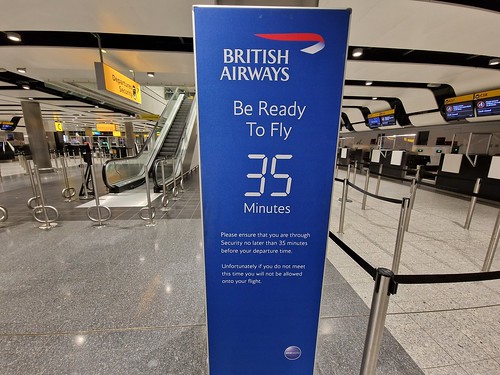 I was ready. I was ready around 835 minutes before the flight to be fair. 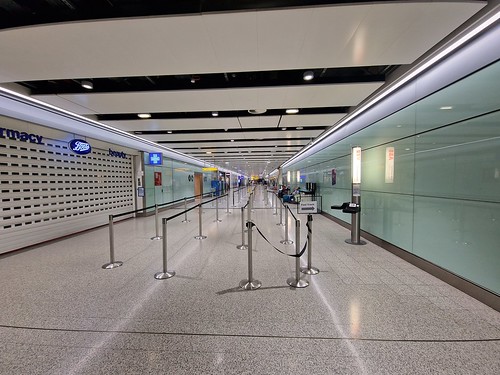 They could probably do with some more seats on the first floor, but it was starting to get a little busier before the security lines opened at 04:30. I was confused why around 40 people were standing in what I thought was an odd place for the security line, at an overflow area. I decided these savvy travellers must know what they were doing, but I was hardly in a rush, so I stood in the normal place. Fortunately, I managed to find myself at the front of the queue and so was the second person (or second non-staff member to be more accurate) to enter airside. 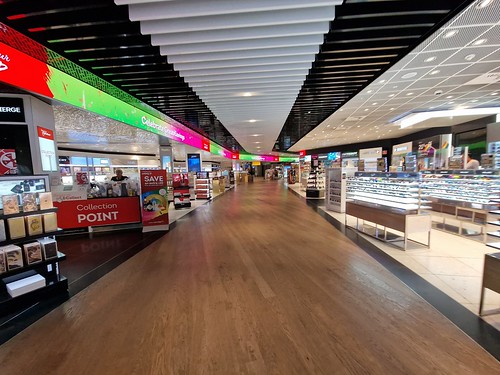 Peace and quiet at duty free. 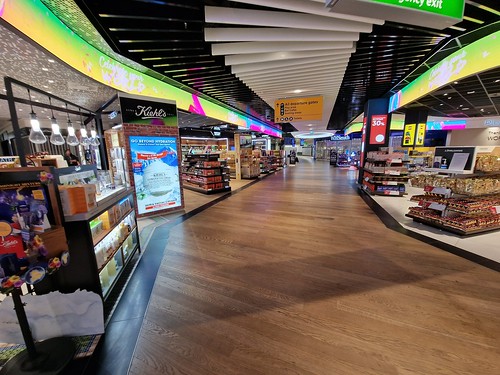 I’ve never really understood who buys all this stuff, it’s a huge retail area and nothing seems particularly good value to me. I don’t know whether it’s a mix of people buying presents and those who just get excited when they see alcohol for sale. Now, if they had a decent craft beer selection then I might be interested. 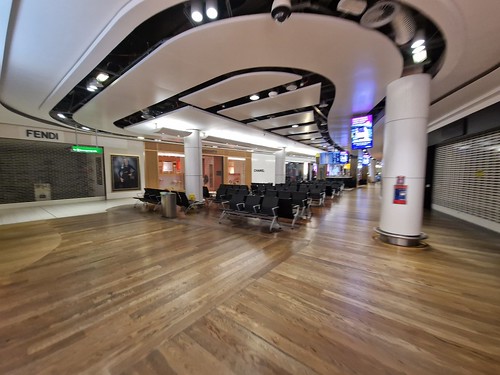 Slightly blurry, but there’s no shortage of seating if you go to the airport early. Who needs a hotel? An unnecessary decadence. 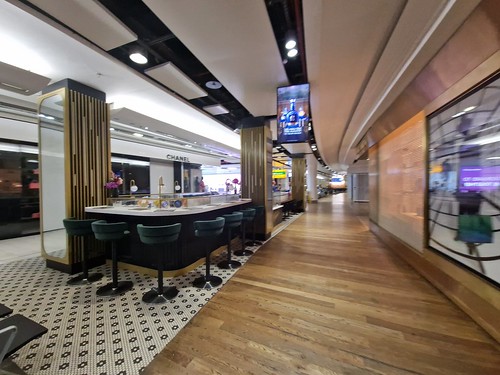 I have no idea how I’ve managed to take such blurry photos, but there’s the very quiet oyster and champagne bar or whatever it is. It’s not somewhere I’ve felt the need to spend much time. Actually, as an aside, I don’t really understand it, it’s expensive and I’d have thought if you can afford to go there, you’d likely have airline status to go to a lounge. And it’s a very open place to sit. But there we go, perhaps people like being seen when they’re being decadent. 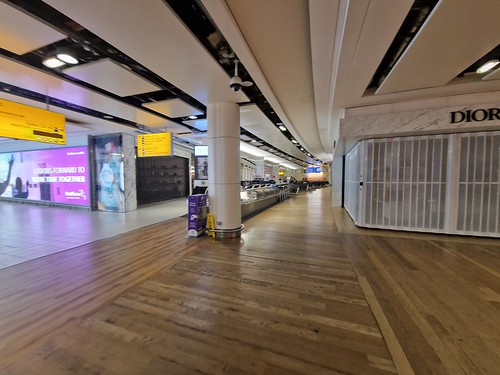 I’d arrived before any of the shops had opened as well. 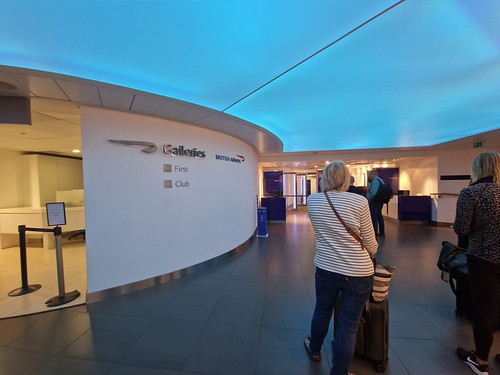 The BA lounge opened at 05:00. Well, it’s meant to, the bouncy and happy staff member went to open the First Class section at 05:00 and then she realised there was no-one at the main entrance. At 05:05 an harrassed member of staff turns up and the lounge whirs into action. Fair play to her, what a time to get to the airport and the staff have to go through security every day, it must be tiring. Anyway, the First entrance is to the left and the Club entrance is to the right. Two of the customers in front of me were entirely the wrong place, they were going to the Aspire Lounge or whatever it was, and seemed annoyed at BA that they hadn’t made clear it was the BA lounge. The signage on the wall is a clue. 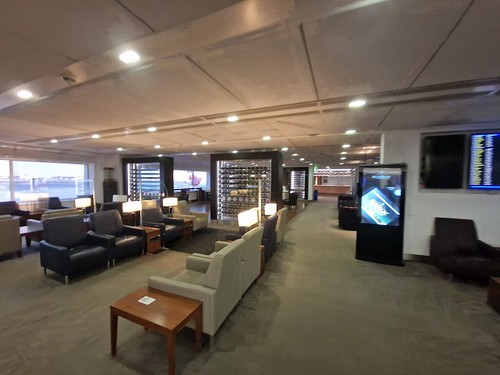 I must have been tired, these photos are dreadful. Anyway, the BA lounge main seating area. 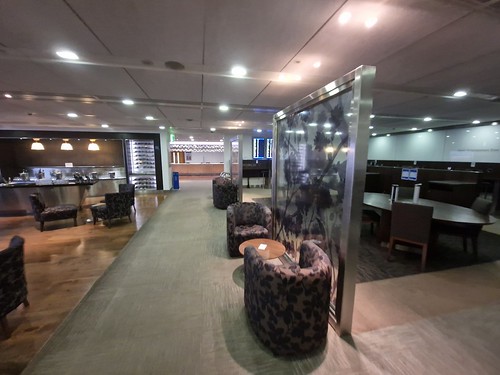 Looking towards the rear, the little business section is to the right. No beer again in the lounge, just Heineken. 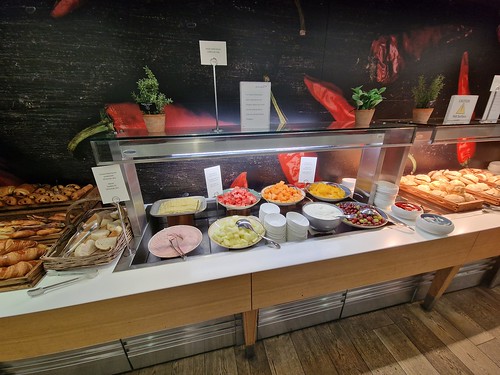 The BA order to the table app seems to have been removed, everything is on display again and it’s fair to say that’s it’s beautifully presented when no customer has mauled it all about. 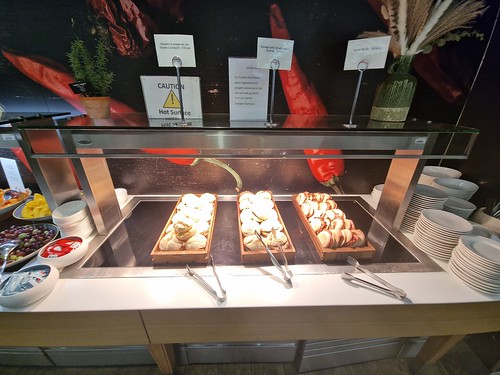 The sausage and bacon rolls, which seem to be a waste of food if I’m being honest. A fair number of people ditch the rolls, including myself, to eat the bacon and sausage. The muffins were soggy and the rolls were hard and inedible, it just seems a waste of BA’s money. They must be able to deliver something better than this. I’m not specifically complaining, well no more than usual, for me, just that they’re spending all this money and delivering a product which is evidently inferior to the lounges around them (although I’d add the First section of the lounge is better, but I haven’t had access to that for years).

I asked a couple of times when the showers would be opening with no-one being sure, and the lovely lady on the First desk (not that I had access to that lounge, it’s just next to where the showers are) was confused why they were shut. She went off to find out and came back very apologetic to say the showers were closed for the week, but she hadn’t been told. I appreciated her help and assistance, but fortunately, there was a solution to this, the Cathay Pacific lounge which opened at 05:30. The staff try so hard in the BA lounge, but the airline doesn’t always seem to want to help them. 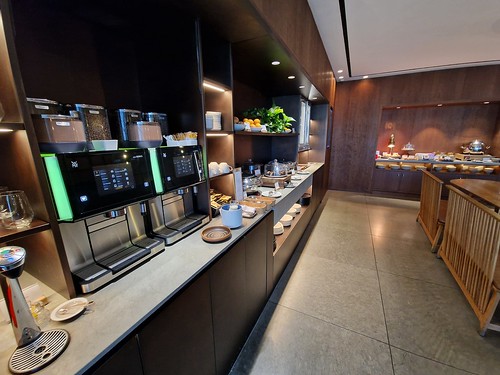 Cathay Pacific had showers which were immaculate, so that was that solved. The staff try so hard in the Cathay Pacific lounge and the airline does seem to want to help them. It wasn’t busy, and indeed I was the only person in the lounge for a few minutes, this is the part of the self-service breakfast selection. Spotless as ever. 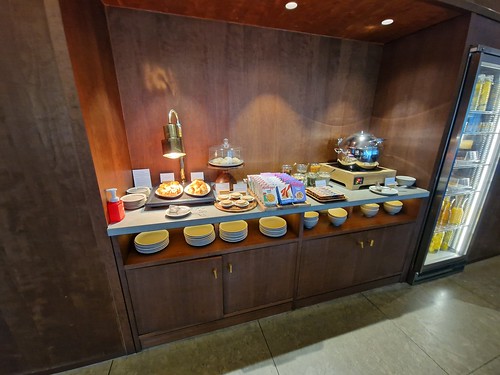 And the other bit. There’s a selection of sausages, bacon and the like for those who want hot items. 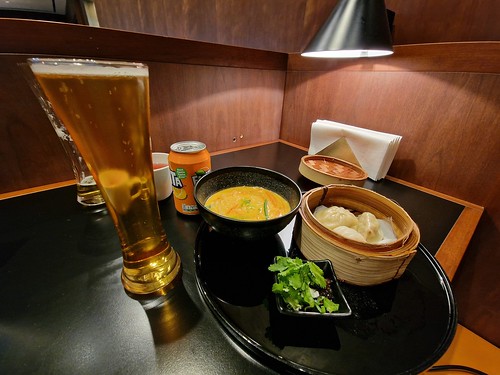 But, yet again, I decided I wanted to order from the chefs at the Asian food counter and got my standard order of Thai coconut and vegetable soup, the Mix Dim sum basket, Fanta and beer. What a time to be alive…. And compare and contrast to the BA lounge. The flight time meant I didn’t really enough time to visit the Qantas lounge for some calamari as it opens a little later, but I was refreshed and ready for the new day after leaving the Cathay Pacific lounge. I’m disappointed to say I won’t be back in T3 for a while, as the flights I had departing from the terminal have been moved to T5. 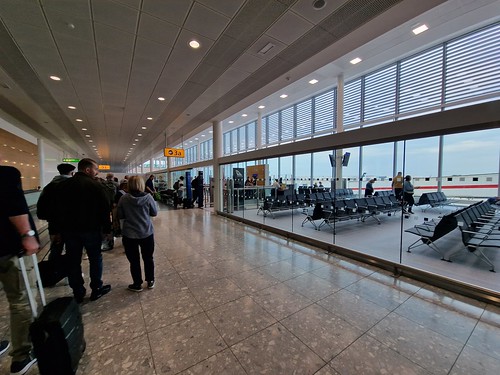 It was unclear whether there was a priority line at the gate, but I wasn’t going to go hunting for it. The man behind me didn’t have the same restraint, I heard a series of “I will go and look”, “no, we’re entitled to use it” and the like, as his what I assume was wife tried to calm him. He stomped over in the end and asked where the priority line was, before shouting back to wife “we can enter the priority line here”. I admire his determination to sit in the gate slightly quicker than the others, although I have to confess to them following him. I tried to look as embarrassed as the guy’s wife. 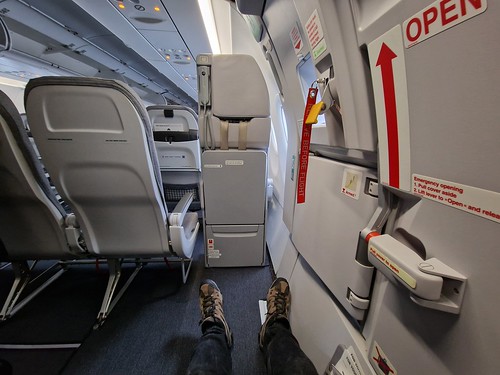 The flight was booked with British Airways, but they’ve run out of aircraft, so they’re using Finn Air on a wet lease arrangement. So the pilots and cabin crew are all from Finn Air, whilst the service standard is British Airways. This has the advantage of this seat with lots of leg room, which as far as I’m concerned is the best in the economy part of the aircraft. I think I dozed off for a chunk of the flight and there was no-one sitting next to me, so this felt very spacious. 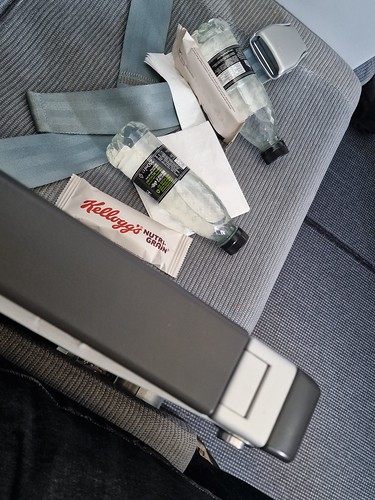 The mid-flight snack, a smaller bottle of water and a Nutrigrain bar. There was a man in the aisle seat, and we must have both dozed off, as the crew had just left them on the seat for us. The crew were excellent, friendly, personable and engaging, Finn Air should be very proud. Apparently they spend five days in London being put up at hotels, which must be costing BA a fortune, before returning to Helsinki for a few days. 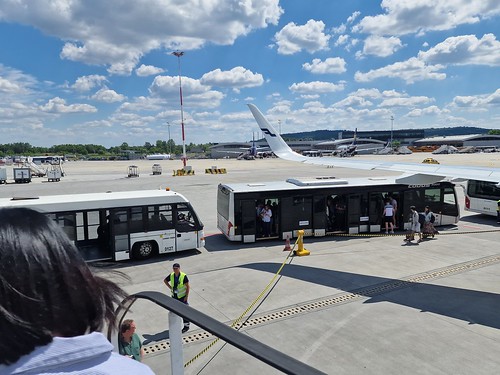 Oh good, a bus to the terminal. Not that it matters, I’m hardly ever in a rush. I noticed that it was too hot. 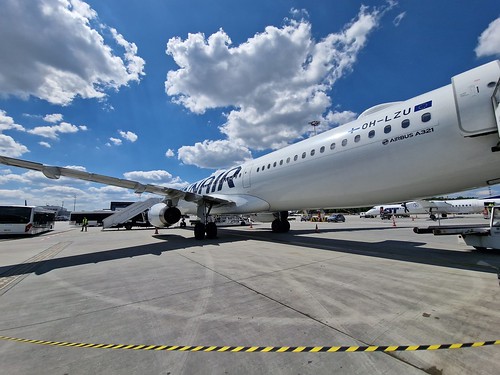 Although getting a bus did give me time to take a photo of the aircraft, which is OH-LZU, an A321 which Finn Air have operated since it was manufactured in 2018. 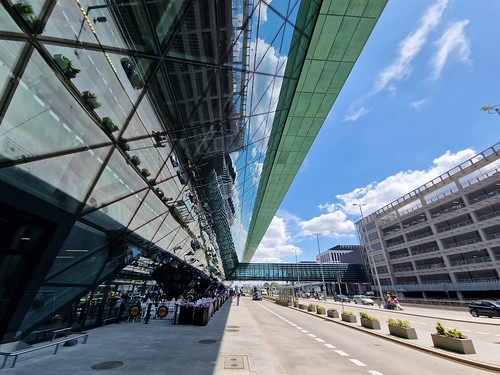 It didn’t take long to get through border control, and I decided to use my limited Polish to the border guard. He replied, in Polish, asking if I was Polish as I would have then been in the wrong queue. He soon realised from my garbled answer that I wasn’t. Here’s the front of the terminal and it was evident to me that it was already too hot. I may have mentioned that. 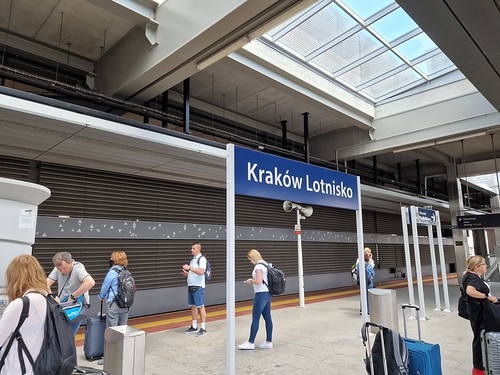 The train from the airport to the city centre, which is over twice the price of the one from Warsaw. That’s the problem with these tourist cities. 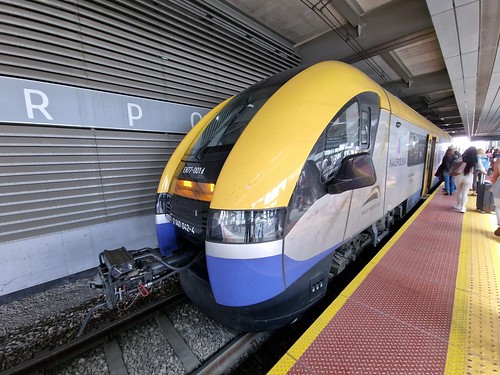 I bought a ticket from the machine and then waited excitedly to board. The train was quite busy and unusually, you can buy tickets on board despite there being ticket facilities on the platform. One person showed their bus ticket, but the train guard was having none of it, they had to buy a rail ticket. 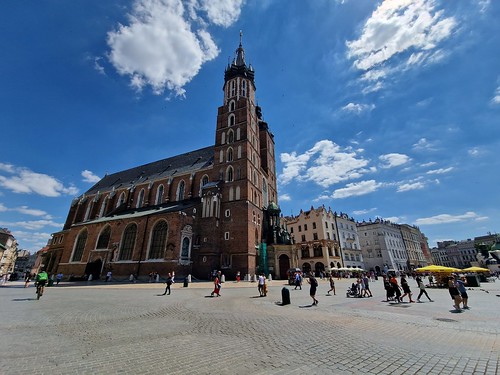 I’ve visited Krakow numerous times before, but here’s a quick photo from the city centre as I walked to the hotel in the searing heat. Krakow is a beautiful city, but it is very touristy, so I prefer visiting other cities in Poland, but it’s nonetheless a delight to be back. 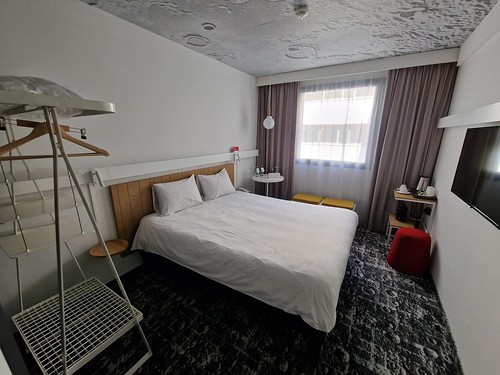 Grrrrr, I didn’t entirely like the room, it’s one of these damn Ibis changes to make it feel like a nursing home. I’ve stayed at Ibis Krakow Centrum before, and they had better rooms with a desk and chair. I did query with reception if they had any of the older rooms, but they said they didn’t. Their answer was “we don’t put chairs in rooms any more”. I’m not entirely sure how that is seen as a good idea, as although I understand not everyone has the same requirements as me, a chair isn’t beyond Ibis Budget, let alone Ibis. This is, I think, an upgraded room, as there’s a coffee machine. I didn’t understand the point of that as they gave me two coffees for a five night stay, but those two were delicious I suppose. There’s also water provided, which I appreciated as it’s too hot. The window opened so that was positive, but the air conditioning in the room sort of worked, not to make the room as freezing as I’d like, but sufficient to be comfortable. 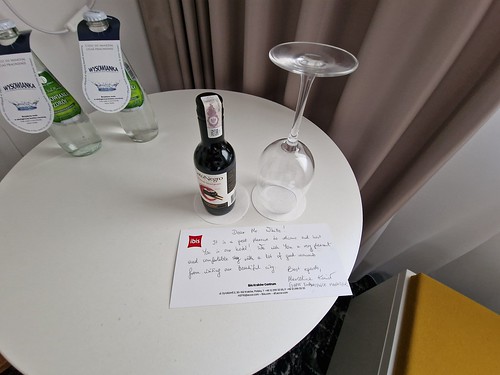 I appreciated the note though, that was kind. I’m not really into red wine, but it was a gift and that was very nice of them, so I did drink it as I didn’t want to be rude. I’m selfless like that.

Wwith that, I was back in Poland, although I had some sleep to catch up on.