There was little of consequence on Saturday because I was far too focused on the excitement of the LDWA boat trip that was taking place on the Sunday. There’s the usual heap of photos at https://flickr.com/photos/julianwhite-uk/albums/72177720300345889 for anyone who wants to trawl through them all. 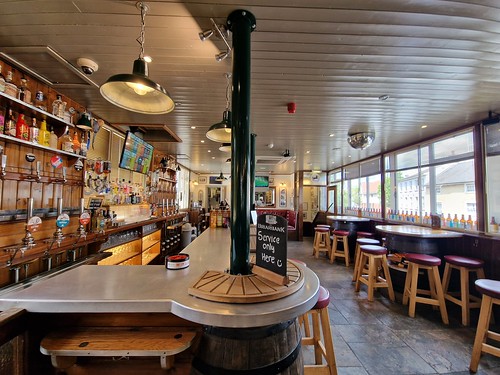 My friend Liam, who is pub obsessed, demanded that we go to Briarbank, even if it meant missing the pre boat trip walk, so I decided that we’d better do that to keep him happy. I went here a few months ago, it’s a laid-back and friendly venue which would be easy to miss. And here’s a quiz question, there’s a subtle hint in the photo as to what this building used to be. 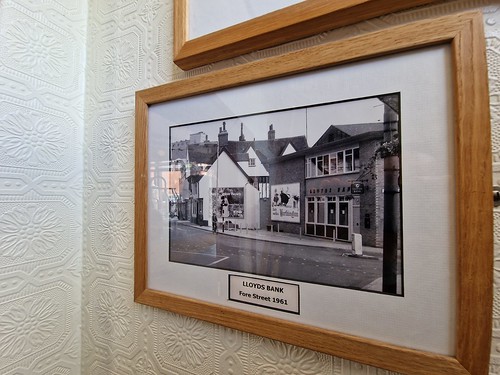 Here’s the answer and well done to anyone who noticed what was above the door in the previous photo. 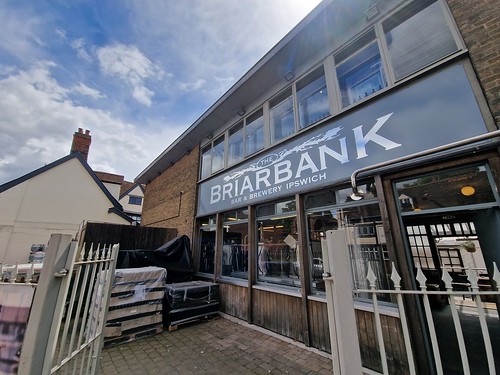 The frontage of the building today. They’ve got a pleasant outside area I noticed later on and I enjoyed my visit, the Briar Cobnut brown ale was well-kept and quite malty. 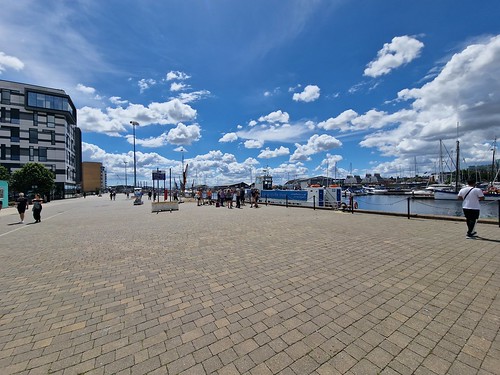 Here was the vessel for the day, the Orwell Lady. This boat trip was paid for by Norfolk & Suffolk LDWA as part of the national organisation’s 50th birthday and I think 40 or so members came along for the journey. I had thought that the boat was a bit bigger than it was, but it’s a vessel with an interesting history, it was once a Thames River cruiser which was put together in 1979. It operated from Westminster Pier for a decade, then moved to Brownsea Island near Poole and has been meandering around Ipswich since 2001. 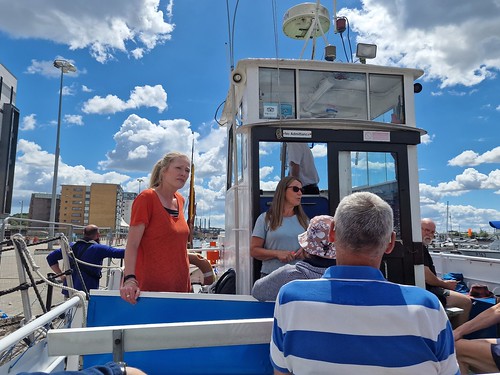 There’s the new N&S chair in the centre, Hilary, taking control after Hayley (on the left) yelled at everyone to be quiet. She’s good at getting quiet is that Hayley! 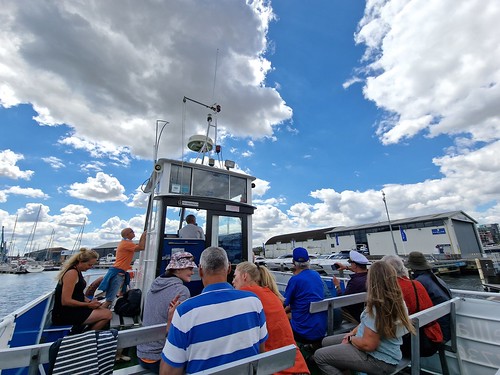 And we’re off! The captain, or whatever he’s called, gave a running commentary during the day of things to look out for. 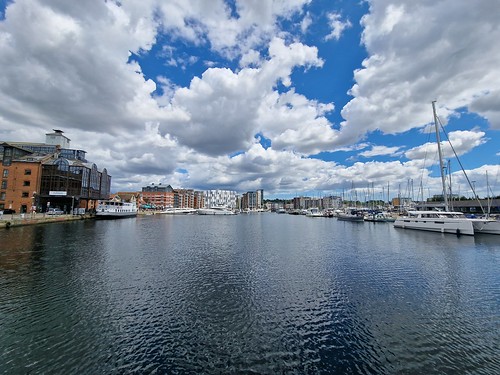 We had to go into a lock to get onto the Orwell from the Marina and there was a bit of a queue for that, so we did a little tour of the harbour first. I remember Ipswich marina as an industrial and quite derelict area nearly two decades ago, it has very much changed to be really quite decadent now. 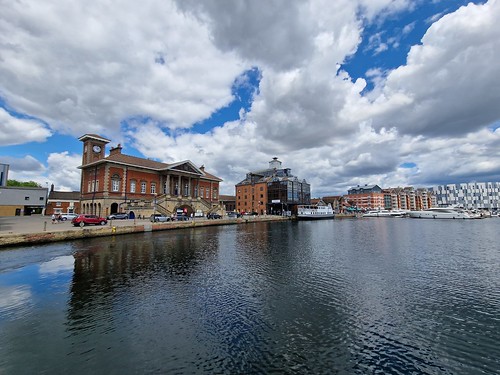 This is the grand building of the Old Customs House, originally built in 1845, replacing the previous building was which thought to have been there for over 400 years. 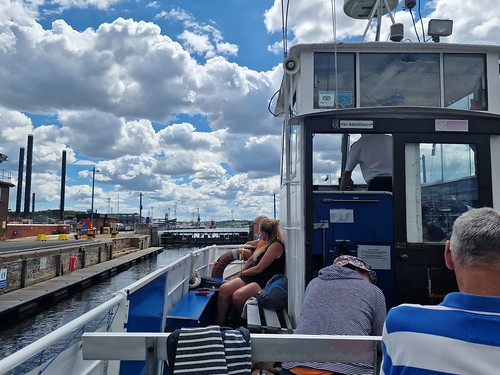 Into the lock. As Alan Partridge would say, it’s all happening now. Susanna was on the vessel and I was surprised that she hadn’t been to Ipswich before, as she’s been just about everywhere. I was impressed that she wanted to see the Wolsey Gateway, it’s one of the treasures of Ipswich that I’ve thought doesn’t get the recognition that it deserves. Ipswich could have been very different today if Wolsey’s plans for his Ipswich college had come to fruition, it could have perhaps been more like Cambridge and Oxford. The Gateway is a remarkable survivor and was intended to be the entrance from the river into the college, which itself was never built. 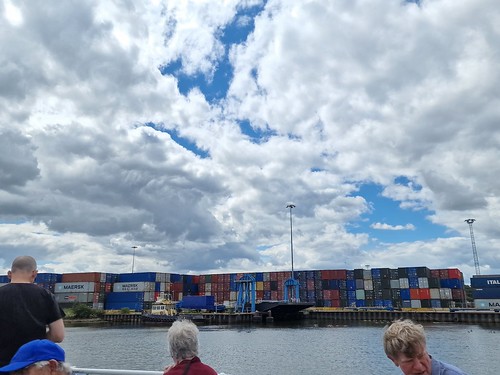 All of these containers are courtesy of Matt Hancock, hundreds of them, all with PPE waiting to be destroyed. 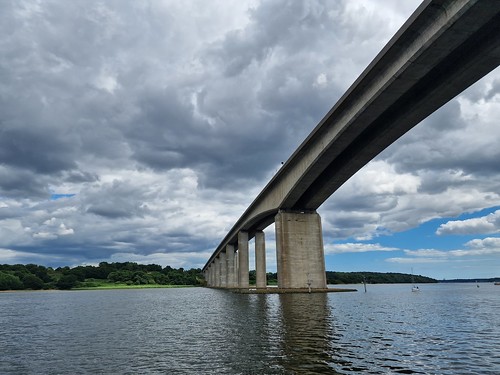 I’ve walked along the riverbank before, and gone over the Orwell Bridge in a car, but I’ve never been in a boat thing that goes underneath the bridge. 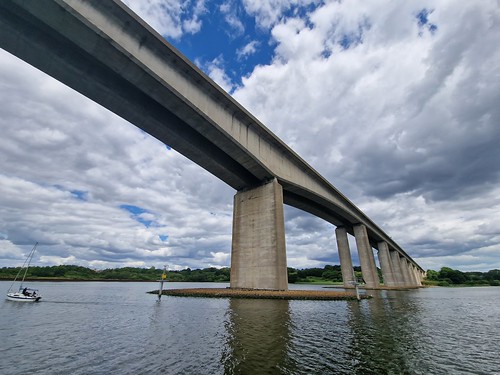 A little island with some fishermen. 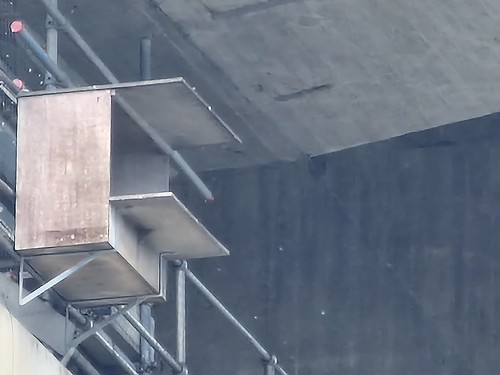 And a hawk’s box, or some sort of bird like that. I’m pleased at the zoom on my camera, this is the first time that I’ve properly tried it out on something I wanted to see. What I wanted to see wasn’t there, but I guess that’s not quite the point. 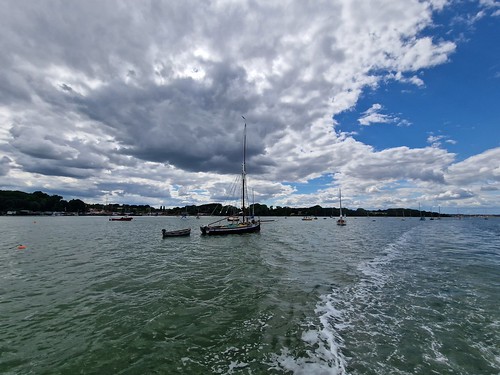 I don’t think that I’d want a yacht, it looks a right hassle to maintain and manoeuvre about. I imagine it’s a very expensive hobby as well, so I think I’ll stick to craft beer where I’ve got no fears of capsizing. Well, I hope not anyway. 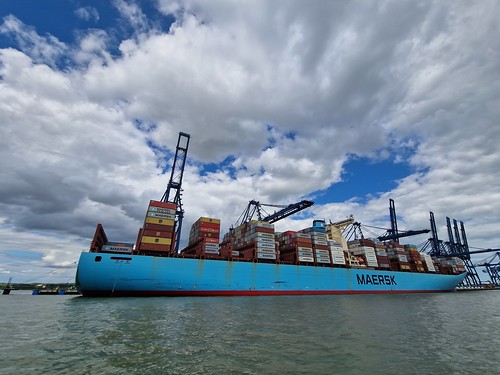 Look at the size of this container ship operated by Maersk. I remember being close to container ships in Seattle harbour when I went on a little boat trip there, but I don’t recall ships any of this size. Apparently this can hold several thousand containers and it still amazes me that the thing can still float with all that weight. 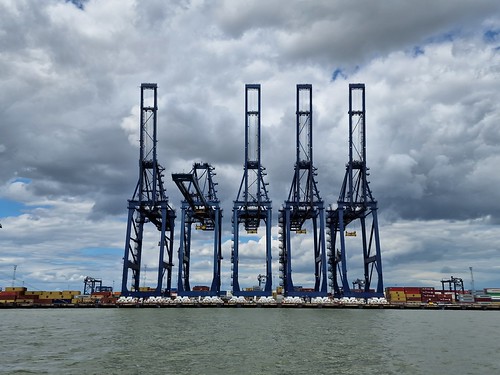 The cranes for taking containers on and off ships. 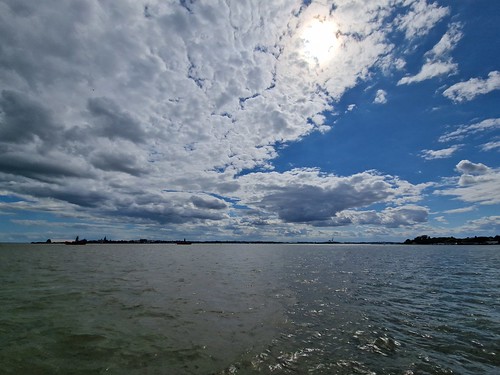 We didn’t unfortunately get up the powerboat speeds of when a little group of us went on the Thames Rocket a few months back. 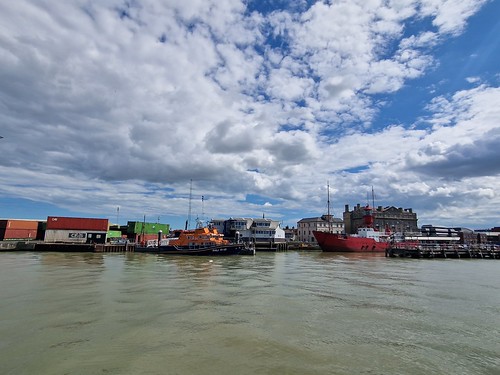 Harwich and its lifeboat station, which is one that Liam didn’t build. 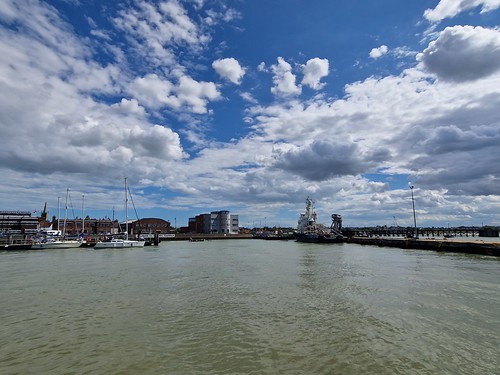 It’s a long time I’ve been to Harwich, I fancy another visit at some point. The geography of the situation, namely the big river in the way, makes it harder for me to get to than Felixstowe, despite them being so close on the map. 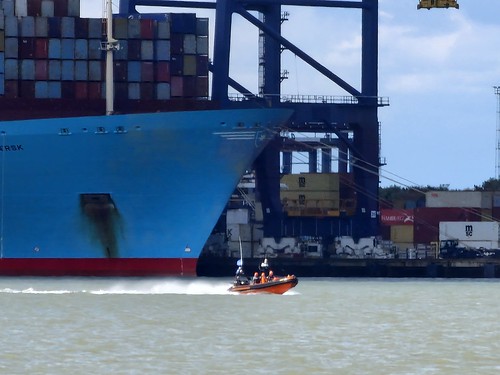 There was some kind of emergency, so this little boat thing was allowed to travel at speed ahead of us. 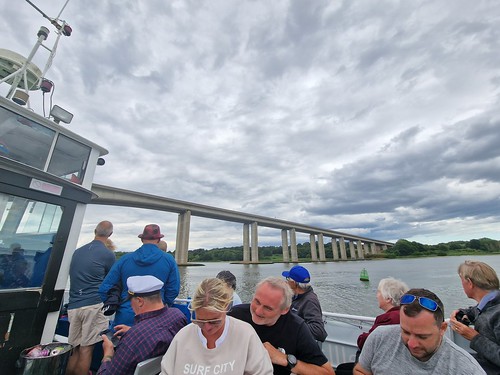 There’s Simon, Jane and Liam. Richard managed to break one arm off of his sunglasses as a party trick to amuse people which was kind of him. 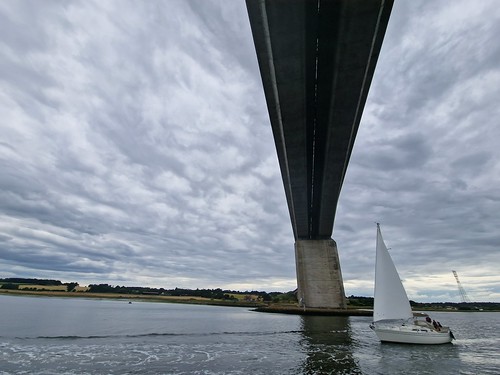 Back under the Orwell Bridge, with the whole trip having taken around three hours. 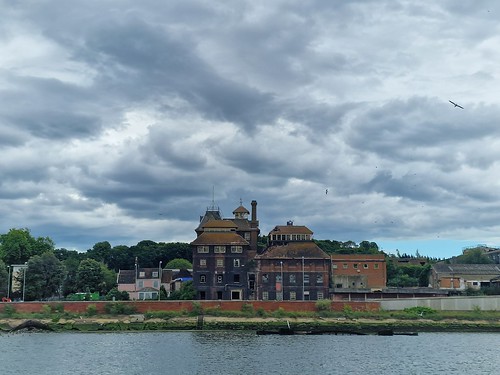 The Cliff Brewery building originally constructed in 1896 and not in very good shape at the moment. There are plans to get on and fix this building up, but they need to hurry up before it just falls down. There’s more about this building on the Ipswich Maritime Trust web-site. 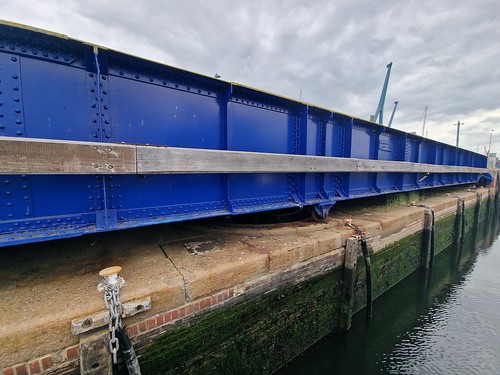 Sitting in the lock waiting to re-enter Ipswich Marina harbour, it’s surprising (to me anyway) how quickly the water level rises but without being able to feel it.

Anyway, all in all a very lovely day, thanks to Simon and Hilary for organising this trip, a lovely way of commemorating the LDWA’s 50th birthday. I’m pleased to say that no-one fell overboard, no-one was seasick and everyone was actually quite brave. It was also lovely to catch up on gossip, which I think was the main function of the day really. 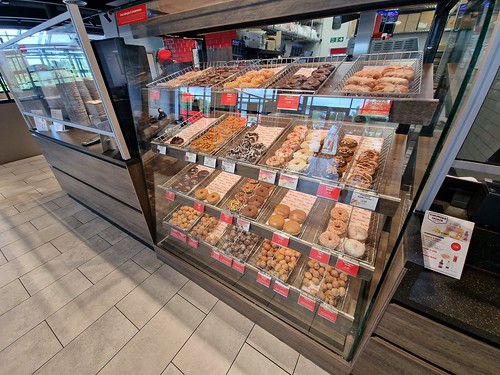 Liam had never been to Tim Hortons, so we had a little visit on the way back to their new Ipswich outlet. 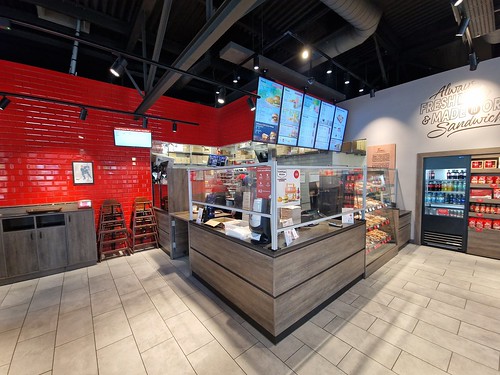 I quite like the chain, although they’re expanding quickly and I wonder just how different their offering is. Anyway, this is a bit of an aside to the rest of my post about the boat trip, but I enjoyed my chicken strips anyway.