Eric Rolfe ensured that there will be plenty of photos of the Summer Poppyline event for Strider and elsewhere in due course, so this post is more about the organisation of the Summer Poppyline challenge event. It’s organised by Norfolk and Suffolk LDWA and it takes place most years, taking in a smaller part of the Winter Poppyline 50 mile event which is put on every two years. This year there was the choice of a 19 mile route or a 50 kilometre route, with this latter distance being chosen as part of the LDWA’s 50th birthday celebrations. 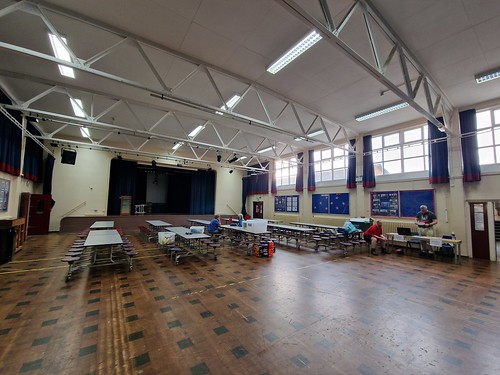 It was an early start, with Richard driving Stuart and I to the start of the event at Sheringham High School. You can spot them both to the right of this photo, with Stuart wanting to set off as soon as possible for fear that he might come in last or something. However, it’s all about completing the event and enjoying the view, so it wouldn’t have mattered. But it didn’t happen either, Karen and the other NEC members swept him along. Stuart, Julie, Bill and Sara were all very brave in taking part, not to mention that Karen was doing the longer event and is always brave.

The numbers were a little lower than usual, mostly due to external factors than any loss of interest in challenge events, but we had over 130 people signed up. I’ve trained Richard up to do everything that I used to do, showing just how good at delegation I am. I think in a few years that Richard might be able to cope entirely on his own. Registration went smoothly, particularly for those in my queue who enjoyed my professionalism and efficiency. Or something like that. 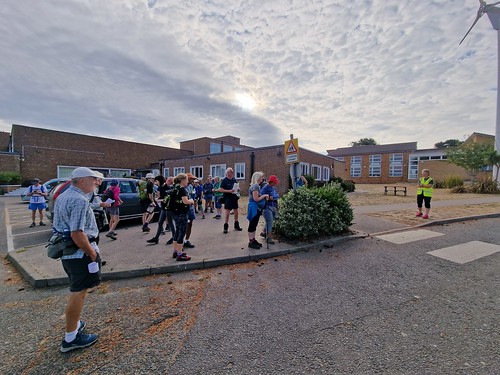 There’s Jayne, ready to set everyone off on the first wave and I note Katie, the organiser of the Norfolk & Suffolk group’s 100 event in 2025, at the front just bursting with enthusiasm to start. I like being at the start of the events, to see all the excitement and just a little trepidation about the adventure that was in front of the entrants. To some, the distances are easy, but to others they’re more of a challenge and I know we had plenty of people taking part in their first LDWA event. 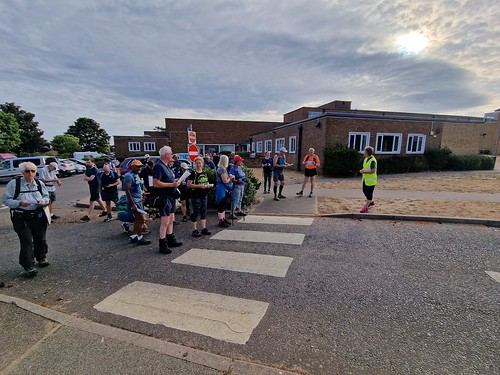 There’s Eric on the left, ready for his day of walking and taking photos. There are plenty of hills near to the start of the walk, not least the challenges of Beeston Bump, but it’s good to have a variety of terrains as not everyone can cope with endless miles of flat in the way that I can. I’d add that it’s great to see so many local members volunteering at the event, it’s a highlight for many people who want to help support the walkers and runners around the event. 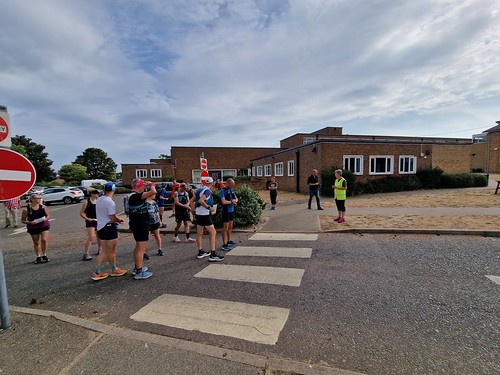 Jayne setting the runners off on their walk, or in this case run, with the weather being quite warm, but not overly hot and there was a breeze from the coast. It was a delight to see our marshal Simon H turn up, although he was doing a very strange walk due to a leg injury, namely because he has pushed himself so much to try and be an athlete like myself. He should know his limits, but I didn’t say anything of course, and I was very sympathetic and full of empathy. 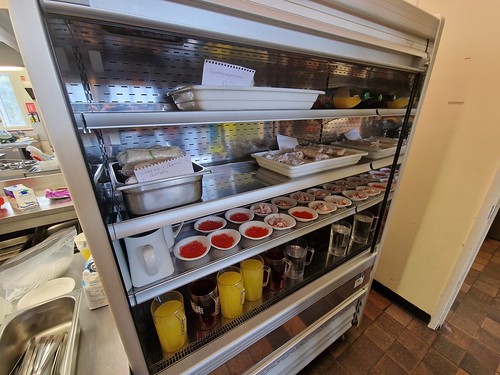 Sometimes we don’t have access to all of the cooking facilities in the locations that we hire, but in this case that wasn’t a problem, Jayne and her crew were busy making a variety of wraps for the walkers and there was a handy self-service area. As an additional treat, there was Eton Mess and ice cream, along with a range of cold and hot drinks.

It was all peaceful at HQ during the day, although since I was the emergency contact, I received a phone call from a walker concerned to see a fire near checkpoint 2. This transpired to be quite a serious fire on farmland, but fortunately the fire brigade were on hand and they were able to put it out. It provided some memorable moments for walkers, who might have feared momentarily that they couldn’t access our checkpoint full of food and drink. We ensured that the fire brigade knew about the situation and Malcolm bravely went out to go and have a look at the situation in case it impacted on our walkers. 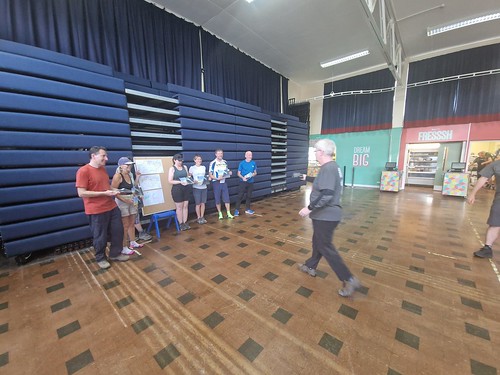 Some of the entrants from Hike Norfolk celebrating their success, it’s good to see a steady flow of walkers from that group doing so well on these challenge events.

It was positive to hear all the feedback about the checkpoints and the welcome that they had offered, not to mention the range of food and drink that walkers and runners enjoyed. I hope that all of the marshals enjoyed their day, with everyone at HQ having a marvellous time, especially when Jayne arrived with some extra lunchtime treats for the hardworking registration desk operative and also for Richard. We heard later that a few of our walkers encountered some wasps early on during the walk, not something that is ideal, but good humour and bravery got them through.

As for the NEC entrants, Karen swept in looking like she hadn’t even entered the event, whilst Stuart looked quite worn out if I’m being honest, which I was. I had a lot of sympathy for him, I know how he felt, but he had been very brave indeed. Julie, Bill and Sara looked suitably tired from their experience, but I’m pleased that they enjoyed the route. Tim was also going to take part, but unfortunately, due to circumstances mostly out of his control, he wasn’t able to make it to the event. But, we’re pleased to have been able to offer some hospitality to the NEC officers who did take part.

The next challenge event is the Flower of Suffolk on the first Sunday of October, sadly this will be one of the first local events that I’ll miss in years, namely because I hope to be in the United States. I do hope that Richard copes without me on that event, but there will support on hand if he gets overwhelmed without my calm influence to gently guide him back on track. I shall of course report back here in October with whatever gossip I’ve managed to pick up from overseas.

I’m not sure I’ll be walking any more challenge events this year, but I hope to take part in a few next year, especially as Richard has indicated that he’s up for trying an 18 mile event. He’ll definitely need my support, encouragement and positivity with that, so anyone with ideas on which is the best LDWA event for him to start on, don’t hesitate to let me know   🙂 Saturday and Sunday : LDWA Boat Trip Along the Orwell