The entrance to Bialystok railway station. Standing on the footbridge over the platforms, the train on platform 3 is the one that I was boarding. There’s a story, albeit of limited interest to anyone, about that. I’m always moderately nervous about boarding the wrong train, so I was confused that there were quite a lot of people on the platform who weren’t getting on the train. I was confused as the yellow departures sheet suggested that there were no other trains departing, so the train that was on platform three should be the only one to get on. Not least that it also had the train number and Warsaw on it, but I pondered why not everyone was getting on it. So, I faffed around taking some photos before boarding. Here’s one of them. Anyway, at this stage, a shiny intercity train pulls in, seemingly quite delayed and that was the reason that people were waiting. So I decide it’s time to board the train that I’m meant to be getting on and head to my seat. There are no other passengers on the carriage other than the person sitting in the aisle seat, next to my seat and she has just that second sat down and made herself comfortable. I hate such situations, it would look ridiculous if I make her get up to let me in and then we’re the only two on the carriage for the journey. So I sit nearby, until someone hovers nearby to where I’m sitting and I guessed that I was in their seat (I wasn’t as it transpired) before then deciding I’d move to my originally allocated seat. There’s a Very British Problems post about just this sort of situation…. Bialystok railway station, which is being heavily renovated at the moment, although they’ve still got another year to go before it’s all finished. The newly restored building looks excellent and they’re renovating stations along the railway line, so this arterial route from the city to Warsaw is likely heading for increases in passenger usage.

Around half-way through the journey, the train stopped at Małkinia Górna railway station. I felt an urge to check Wikipedia about this station and I found out, although really should have known, that this was the connecting line to Treblinka concentration camp. If I’d thought about it in advance, I’d have got a train ticket to here and then walked to the site of the camp before getting a later train to Warsaw. There isn’t much at Treblinka, but I’ll like to see the memorial and I think there’s a small museum there. I had expected a compartment / corridor train, solely because that’s what the rail company used on the train to get me to Bialystok a few days before. But, it was a more traditional type of carriage, which was comfortable although lacked power and wi-fi. And safely back into Warszawa Centralna, exactly on time. The journey had again cost £6 and lasted for around two and a half hours. All very easy once again…. 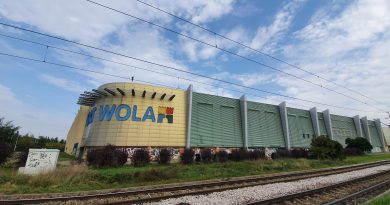 Bialystok – That Which is No More (Barbican Mission Church)