Back to my much neglected little series about burials at the Rosary Cemetery in Norwich. During lockdown I looked up quite a few CWGC graves and also found some errors in the official record, which they kindly always corrected for me, which I accept was quite an odd little hobby. 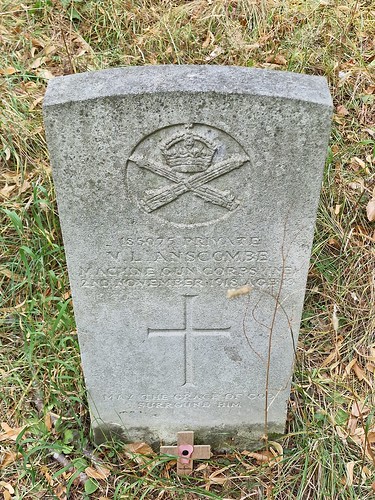 This is the war grave of Private Victor Lambert Anscombe. There’s a photo of Victor at https://norfolk.spydus.co.uk/cgi-bin/spydus.exe/ENQ/WPAC/BIBENQ?SETLVL=&BRN=721081&FMT=IMG. Norfolk County Council stomp their feet very loudly about not allowing use of these images directly on third party sites, which I think is a shame, particularly when it’s someone who died in the First World War whose image deserves to be shared widely.

At the 1901 census, the family had lived at Rattle Row in Wymondham, but by 1911 and following the death of Frederick, they had moved to Damgate Street in Wymondham. They lived there with Emma’s parents, Frederick J and Sophia Tuttle. Just before the advent of the First World War, they had moved to 37, St Julian Street in Norwich. Sadly, this street was destroyed during some badly planned slum clearance, although the line of the street is similar to that of Rouen Road today. I’ve moaned about this damage in another blog post. There’s something additionally sad when so little trace of the life of a young person remains, with the old properties in Rattle Row having also been pulled down, although the street remains.

Victor went along to the Drill Hall (I think the Chapel Field one, rather than the Bethel Street one, a gothic style building constructed in the Victorian period which incorporated part of the city wall but which was demolished to build the ring road in 1963) in Norwich on 8 July 1915 to sign up and he was given service number 185075. His records have survived, so avoided the fate of many others which were destroyed during an air raid fire during the Second World War, showing that he was 5’3″ tall, he had a 33 inch waist and green eyes. He was working at a cycle engineer at the time of his signing up and he joined the 4th Norfolk Regiment. He was then moved to the Machine Gun Corps, B Training Battalion, although it’s not clear to me where he served after that. Victor was injured on 18 October 1918, moved to the military hospital at Cannock Chase, where he died of pneumonia on 2 November 1918.

When Victor was away, his mother married James Gasson (born in 1886) in the second quarter of 1917, who worked as a carpenter. Victor’s estate went to probate and it was valued at £127 19s. The years after Victor’s death must have been difficult for his mother, as she had already lost her first husband, her son in the war and then her other son, Alan, died in 1951. Emma died on 28 December 1967.

The memorial on Victor’s grave reads “may the grace of God surround him”.