Another in my random series of posts about gravestones in Rosary Cemetery in Norwich. 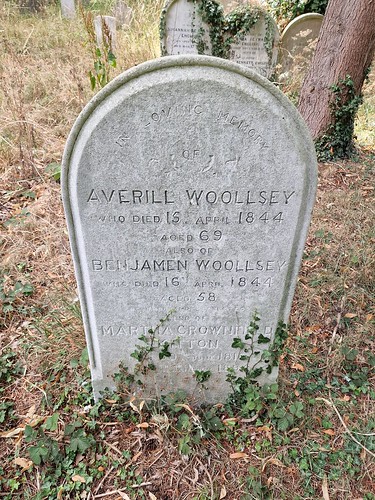 Two things caught my eye about this gravestone at Rosary Cemetery, firstly, it’s very clean and secondly, the dates of death are very close. I assumed that it had been cleaned recently and so there might be a story on-line, but if there is, I can’t find it.

The grave is that of Averill Woollsey (nee Mitchell) who was born in 1775 and she died at the age of 69 on 15 April 1844. Benjamin Woollsey, the son of Benjamin Woollsey and Susanna Wells, was born on 13 December 1786 and baptised in St. Nicholas Church in North Walsham on 31 December 1786. The couple were married at St. Nicholas Church (now the Minster) in Great Yarmouth on 6 December 1812 and they moved to Norwich at some point to live on Magdalen Street.

Benjamin died on 16 April 1844, just one day after his wife, so unless he died very quickly of a broken heart, I assume that there was an illness or accident. However, there’s nothing in the media about it, just a notice that Robert Burcham, who was Benjamin’s business partner in running a corn and seed merchant, would continue the business alone.

This appeared in the local newspaper on 27 April 1844, the quick sale of all of the property which the couple owned. I can’t establish exactly which property he lived at on Magdalen Street, it would have added some colour to the thought of Benjamin’s stuff being carted out of it on Friday 2 May 1844. This remains another blog post without much of an answer, just a story without resolution of why they died so close together, and who has arranged for their gravestone to be cleaned and restored.