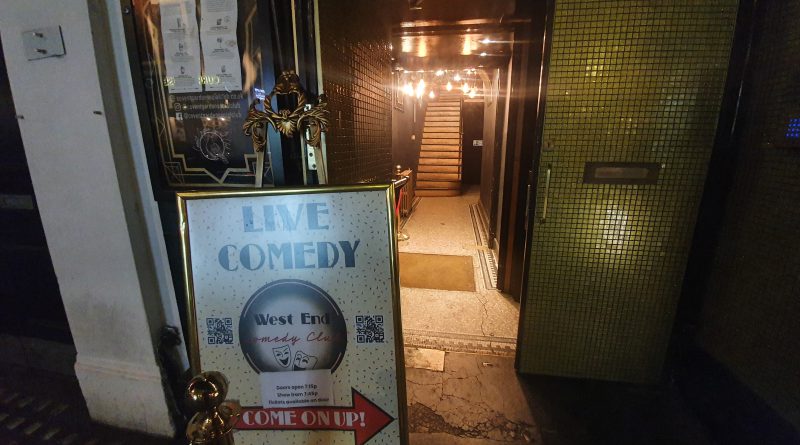 There was a Time Out offer on last week to get a comedy club ticket for £5, instead of the usual £12, and as I haven’t been to one before, I thought this seemed like a good idea. Live comedy has been rather decimated over the last two years, so there are big efforts being made to try and bring people back in. The West End Comedy Club is a new set-up upstairs at the Covent Garden Social Club, at Great Newport Street. It was easy to find and the signage was clear. I read that it was good to get there at opening to get a seat as it wasn’t a large venue, with an absolute limit of 70 people. It certainly wasn’t a big space, just one quite large room with a bar in it, so it felt quite an intimate performance area. There was a friendly welcome from the organiser, who mentioned to me that it was sold out and to find a space that wouldn’t take up a larger space give that there were groups coming. Given what I was told, I decided to opt for a seat by the bar, this is always a comforting place for me to be. Only two people had got there earlier than me, so I didn’t have to fight for space. I had also read about the decadent drinks prices, although £5 for Staropramen isn’t entirely unreasonable given the location. Since this was a night of comedy I won’t comment on the lack of beer options, humorous as the limited selection was. Incidentally, the bar mostly served cocktails and there was one poor barman on his own making these drinks and causing quite a queue to develop although not because he wasn’t actually a decent barman, but because those drinks take so long to serve. And the bar is also brave as any customers wanting a tab had to leave their card behind the bar, which will likely haunt them at some random point in the future. Anyway, bar commentary aside, onto the main event. Photos from the venue itself, with Michael Odewale (top-left) being particularly good and I hadn’t realised that he had been on BBC’s Mock the Week before. There was one performer who wasn’t named before the event, and was just listed as a celebrity, and that transpired to be Simon Brodkin (bottom left) who I’ve never really paid much attention to in the past other than reading about some of his stunts, the best known to me being Brodkin’s great work in annoying the disgrace that is Sepp Blatter and also his handing Theresa May a P45 at a party conference.

Inevitably some material was stronger than others and one comedian had a more muted reaction from the audience as his content was a bit strained. Some of the material is new and the comedians are trying it out with a live audience, with Tom Ward (top-right) having the most surreal of the content, but he integrated music well into his act. Brodkin seemed the smoothest performer out of them all, but he’s had the chance to have more experience and opportunities so I guess that’s inevitable. Incidentally, I hadn’t realised that Brodkin was a trained doctor (I say that not to suggest that some doctors are untrained, just to show he had completed training) before starting a stand-up career, which made his Covid health jokes seem even more appropriate.

There was a smattering of political humour through the performances and inevitably Boris Johnson and Priti Patel didn’t come out too well from that. Covid humour was also in there quite regularly, but not to excess as that would have likely grated after a while given that people want to get away from it. It was a decent balance of different styles of humour and content, all nicely done.

Fortunately, my seating location meant I avoided any of the audience participation, although I think the comedians were most interested in those sitting just in front of them on the sofas. Anyone sitting there would deliberately want attention, so that seems fair enough. And a Scottish man who kept shouting, but the comedians had him sussed quite early on. It all went quite quickly, which must have meant that it was an enjoyable enough experience and I thought rather good for a total cost of £10 for the entry and the drink. Something different at least.