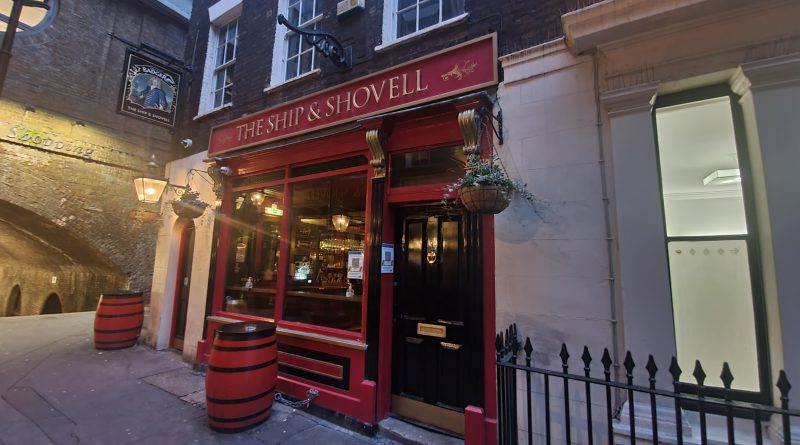 A quiet London gave me chance last year to visit a lot of Good Beer Guide pubs in the city which always looked too crowded to get in before. I’m not sure that’s ideal for the hospitality industry, but it certainly allowed me to see some historic interiors and venues packed with atmosphere. The Ship & Shovell is a new addition to the Good Beer Guide that was only added in the new 2022 edition of the book a couple of months ago. Unusually for a pub, it’s split in two opposite parts each side of the lane (the pub notes that this is unique in London), although it’s also apparently connected by the cellars which also contain the pub’s kitchen. This side was closed off when I visited, but it’s a handy way of having additional capacity. It’s located on Craven Passage, which is located underneath Charing Cross railway station. Here’s the site in the 1890s, with the PH in the middle of the map marking the main part of the pub today, but there’s nothing marked on the extension bit. The building was listed in 1970, with the listed building record noting: The bar area, all nicely presented and there was a friendly team member who welcomed me as soon as I arrived at the bar. Indeed, the service was always personable and engaging. The pub is only taking cards at the moment for payment, and they take Amex (although I only saw that sign after I had paid with a different card). The ship element of the pub’s name is reflected here in the fireplace. The pub is operated by Hall and Woodhouse Brewery, so their beers dominate here. There are plenty of draught (or draft if you prefer) options as well as bottles. There were no dark beers available on draught, but there is an interesting looking milk stout Milk Made which is rated 3.84 on Untappd, so I might ask for that next time I’m in one of the brewery’s venues, of which there are six in the city centre. I rather liked the food menu, which I think is more substantial at lunchtime, but this caters for most snack tastes (well, no Wotsits I accept, but they do have Mini Cheddars) and there’s a 3 for £5 offer on. The prices for the drinks seem to be around £5 to £6 a pint, which is realistic given the central London location. I can imagine that when London is back to some form of normality that venues like this will be crowded once again, especially at 15:45 on a Friday evening which is when I visited.

The on-line reviews for the pub are broadly very positive and they’ve clearly pleased CAMRA for their members to list it in the Good Beer Guide. Looking for the negative comments that are sometimes exciting, there’s a complaint and 1/5 star review which notes:

And another 1/5 complaint about a cold Scotch Egg that wasn’t reheated in a microwave. Personally, I’d rather have a cold Scotch egg and I can’t recall being given one that the pub has microwaved. And a 2/5 star rating from a customer that wasn’t allowed to use the tunnel.

Anyway, welcoming staff, a clean venue and a laid-back and comfortable atmosphere, so it seems to me like an appropriate and sensible addition to the Good Beer Guide. One of the better options for anyone waiting for a train to depart Charing Cross railway station.