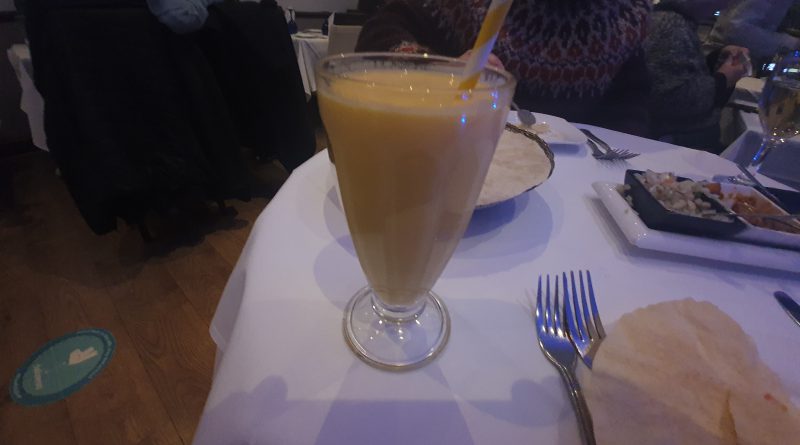 What an appalling photo, but it’s what I have of the exterior of the Cinnamon Tree and so I’ll have to go with it. Richard was on one of his decadent business weekends to London, so we popped to Mikkeller at Exmouth Market as not enough people take me there and it’s one of my favourite bars. We had thought about eating there, but that plan fell apart as they weren’t serving food. I found that on TheFork (TripAdvisor’s booking system which keeps annoying me) the Indian restaurant over the road had 20% off food, so that seemed as good an option as any other. We made the 30 second walk to the restaurant and there was a friendly welcome from the staff. It isn’t the largest Indian restaurant, but they had a couple of tables free. Richard is still wearing his Christmas jumper, even though it’s mid-January, but I didn’t say anything. We limited ourselves to just two poppadoms each instead of our usual three as it’s important to eat healthily. The quality was fine, nothing exceptional, but they met my expectations. I’ve decided that any Indian restaurant that doesn’t serve a mango lassi is probably going to be disappoint me in general. The one here was a little expensive, but suitably rich. Richard went for a white wine which he didn’t think was exceptional, but I’m not a wine person so I wasn’t really that engaged with worrying about that. I noted the beer menu was generic though, they could just walk over the road to buy some cans from Mikkeller to give more options but I accept that it’s not always about the beer. Actually, I don’t accept that, it’s like an apology from Boris Johnson, a fake comment. Anyway, I mustn’t get engaged with politics on this blog, that’s not my aim….. Another inadequate photo, this isn’t ideal. Richard had the salmon mach bahja which he was content with, whilst I had the chicken bhutako. I had never heard of that dish, but it transpires nor has Google, as my searches simply found the menu for this restaurant. It was similar in taste to jalfrezi and the chicken was tender, the sauce had a depth of taste to it and I thought it was perfectly decent. We shared a coconut rice that was acceptable, but not as deep in flavour as I’ve had before. The peshwari naan was suitably almondy, I enjoyed that. Everything was also at the appropriate hot temperature and it took around 12 minutes to be served after ordering. But, the food wasn’t as complex in flavour as I’d ideally like, there was a touch of the generic about it, although it was sufficiently tasty for me not to be disappointed.

The service was always timely and efficient, so the welcome felt authentic. Although three different people served us, there was no duplication of service, so everything felt well managed. I liked that they just lifted off the white tablecloth to reveal another white tablecloth underneath, which Richard had managed to stain as well. The staff didn’t say anything though….. I wonder why Indian restaurants bother with all this linen, it must be a bloody nuisance to keep sending off to be cleaned.

One review I noted, although it’s from 2016, is from a customer who went as a single diner and wasn’t welcomed. This is now incredibly rare, but I hate hearing about it (and hate how TheFork often don’t offer discounts for single diners) and hopefully that’s not their practice now. The review was titled about being an unhappy solo diner, noting:

“Despite restaurant being nearly empty insisted on seating me on a table next to door and at top of stairs by toilet. No sooner had fork touched the table each side dish mid meal was literally whisked away. Clearly just wanted you fed, paid up and out the door to clear the way for bigger parties.”

The 20% off food was taken off the bill, although a 10% service charge put on and the whole bill was hazy in its adding up so it was difficult to check. It came out at £20 each, which seems to be the fairly average price for a meal at an Indian restaurant, so that was fine. I’m not sure that I’d head here again as there was nothing exceptional here that I could think to mention. There was nothing wrong, but it just felt like so many run of the mill Indian restaurants about, and they need something to lift the experience. On the bright side though, we did get a chocolate each with the bill.